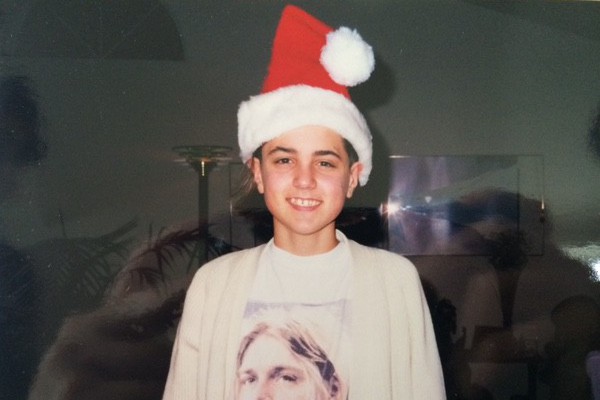 And today we've got another segment of collector's corner, where we interview musicians, producers, DJs, and fans about their record collection. Today, we're interviewing Edward Pignataro IV.

Edward lives just outside of Chicago and got his musical background when his dad used to play Frank Zappa tapes in the car on the way to school. In fact, his pops was in the punk band The Buzzards who were featured in the You Weren't There: History Of Chicago Punk Documentary. Following in his old man's footsteps, Edward started playing music moving from keyboard to drums to guitar and has been in several bands, including the Kobanes.

You can read about Edward's record collection below.

Update 3:50pm est: there's some controversy regarding the subject of this article that we weren't aware of earlier. See the comments of this article for the discussion and links.

What is your earliest memory of hearing a record?
That Savoy Brown album with the bass line of Hellbound Train really stuck with me as a kid, I also liked the "beds are burning" song by Midnight Oil. Frank Zappa's "Don't The Yellow Snow," "Stink Foot," "St.Alfonso's Pancake Breakfast," praticularly that xylophone in the song. My dad looked a lot like Frank Zappa, too. I liked the comedy lyrics of local radio personality Jonathan Brandmeier,

What was the first record that you bought with your own money?
The first record I bought on CD was Smash by the Offspring. Before that it was like Kris Kross- Totally Krossed Out, the "Whoomp! There It Is single" and the "Addams Family Values" song by MC Hammer. The Shaquille O'Neal What's Up Doc? (Can We Rock) cassette I still have.

Why do you collect records?
I collect records really to support the artist. Now with everything being on my phone, I mean the money that I spend on this 6+ iPhone takes away my record spending budget, but I feel it lets me check out a lot of music. I have done a lot of trades over the years, I have a small label called Geet.

I have most of my collection on discogs as well. I really bought a lot of records and sold a lot or traded to put out 7inches of my hardcore band I was in called Saul Turteltaub. Even just to record or go to shows I probably sold a lot of records just to local CD Trader type places. When I worked at Tower Records throughout college it was nice getting a lot of promos and selling those for lunch money. Lately, though the last couple years worth of records that I have bought I haven't played or opened. The CDs I buy usually go to my dad. Like I said, I feel like I just owe the bands/labels the moeny for streaming off bandcamp or youtube, soundcloud. So I'll buy the record, but its honestly a lot more convenient and quicker to just have my input jack through the car or stereo at home just plugged into a cell phone when I listen to music. I kept my iPhone 4 when I got the 6 and on that I got close to a thousand albums from the bandcamp app that doesn't exist anymore.. I never got into CD-Rs or had an actual ipod. My favorite medium is definitely the 45. I like short spans of music by different bands. I like demos mainly from grindcore and hardcore bands, I feel most punk bands earliest material is the most energetic and fun cause it's fresh.

What is the crown jewel of your collection?
The crown jewel of my collection…well, the records I have framed are all the RAMONES LPs, I got some autographed. My favorite I guess is John Jughead's copy of How To Make Enemies & Irritate People that he sold me and threw in a poster and some stickers. Its funny- on it he wrote "jealous you got to tour Japan" and now he's living there. But from high school, the two records I still have besides those Ramones ones, which mostly were my dads, are the Rivethead The Cheap Wine Of Youth LP on Recess and the Connie Dungs/Automatics split 10-nch. I just thought of a couple other 7-inchers' I think I'll hang to forever are the Promise Ring/Texas Is The Reason split I got a record store downtown and the Queers/Sinkhole split Dave from the Gargamels gave me.

What is your most exciting story wherein you tracked down a record that you wanted? Well, one birthday I had, I was probably 26, I'm 31 now. I rode my bike to a used record store over here and the kid at the counter was selling a a few of the 80's Ramones LPs and I was just like "hey man, whatever you they offer you I will give you double for those," knowing that once they put 'em out for sale I'd buy them anyway, but for a lot more. So it was a win win, cause he made moeny off and I got like 3 Ramones LPs for $10 maybe. Another time at a Reckless Records in Chicago I bought an autographed copy of Subterranean Jungle off Dennis Buckley from 88 Fingers Louie.

There's the old adage "You never regret records that you buy, but you always regret the one's you *don't* buy". What record got away from you?
I don't really regret not buying anything. I regret some of the trades I did for other grindcore and hardcore punk stuff. I wish I still had a lot of my Godstomper, Agathocles, Yacopsae, Aus-Rotten records. Stuff like that. Mainly stuff that never got put on CD or uploaded. The Retreads Dumb Kids on Skull Duggery, if someone has that CD please put it on youtube. I remember getting that Less Than Jake Hello Rockview album on a 7" box set which was pretty cool. Lots of those real early LTJ records I really dug as a kid. A lot of the J Church and Boris The Sprinkler 7"s I wish I still had too.

But, is there any record that you *do* regret buying?
The only records I regret buying were the shitty radio rock CDs I got in 6th grade like Live or that band Collective Soul someone told me to get… man that sucked. I spent a lot of money on goregrind at one point in college, that was kinda stupid.

How precious are your records- That is, do you play them regularly, or do you keep them safe and locked away?
I love my record collection. I play a lot of the CDs very often, some of my favorite ones are the FIFTEEN albums, old Get Up Kids, Jawbreaker 24 Hour Revenge Therapy. The Queers Move Back Home and an Australian import of RAMONES first record. Before they released all the RAMONES albums with bonus tracks remastered, they never were really available on CD in the States, so I had a lot them as import releases. Like my Rocket To Russia was from Japan, but it was out here on the All The Stuff and More collection. Anyways, over the years my collection has evolved a lot. I say I've owned probably 1,500 records, but I only have had like 200 at a time. I always sold stuff and traded, etc. Either to put out stuff on my label or get friends into certain bands, or just to get some cash for a new album! It's a hobby I don't think I'll ever put to rest. It would be a dream to own a record shop.

Is medium itself (vinyl, CD, mp3) important to you? Why?
Well most of the best music out there I think is on seven inches. Generally EPs are my favorite.

Do you have a favorite record shop?
My favorite record shop I've been too was Dumb Records in Hiroshima. I like record stores with more than just music. I want to see cool memorabilia on the walls, good music playing, shirts for sale, movies, books, zines, maybe an in-store gig, beer. Record Breakers is the best one in Chicago, its connected to a venue called Reggies now. It used to be in the suburbs close to where I live, that's where I got a lot of my punk music back in high school.

Got any good recommendations? Thanks for letting me share my stories with you and everyone should continue to check out new bands, there's a ton of good shirt out there right now. Count Your Lucky Stars and Topshelf have some great releases. A couple recommendations off the top of my head would be: You Blew It! Grow Up Dude, Grown Ups More Songs, Lillingtons Death By Television, Peabodys-Dillema 7" or any old Connie Dungs albums on Mutant Pop Records. Groovie Ghoulies Fun In The Dark on Lookout! Records, NOFX Fuck The Kids 7-inch on FAT, and The Story So Far Under Soil and Dirt on Pure Noise Records. And if you haven't seen Filmage yet its free in Amazon Prime now, watched it a couple days ago. Go Bulls!