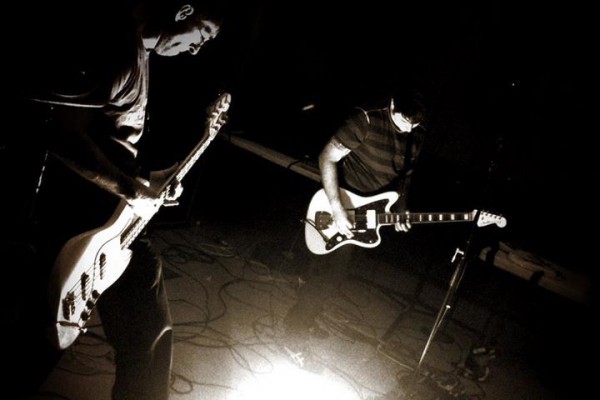 Once again, we are back with a new installment of Collector's Corner, the feature where we ask musicians, DJs, producer, and fans about their record collections. Today, we talk to Joe DeCarolis of Psychic Teens and Hurry!

Psychic Teens are a far out group that merge the flashier side of 80's goth with driving punk and metal. Plus, they have a killer self-run light show and they all wear dark glasses, so their live set is super spooky. This band is weird! (and cool!) Joe lives in New Jersey and is often seen creeping around Philadelphia or at house shows. You can read our interview with him about his collection below.

Do YOU want to be featured in Collector's Corner? E-mail JohnG@punknews.org

What is your earliest memory of hearing a record?
The first time I remember noticing a vinyl record actually playing was a weekend afternoon as a kid, when my mom had one of the early Beatles records on. I think it was Meet the Beatles, because I definitely remember hearing "I Want to Hold Your Hand." She was really happy and bouncing and dancing around the house. It's the first time I remember associating a physical piece of media with the music coming from it.

What was the first record that you bought with your own money?
When I was in high school and decided to start buying vinyl, I got 2 7-inchers s from a local store. They were the Promise Ring/Texas is the Reason split and an EP from a hardcore band my friends were friends with called Rigid. I had heard that they got way better on that record, and it didn't exist on CD. If I wanted to hear it, I needed to get the 7". Same with the TiTR song on that split. I really started buying records so I could hear songs that were only available on vinyl. The further I dug into punk/hc/indie/emo/etc, the more I realized that bands had amazing songs that weren't available on CD or cassette. If I wanted everything, I needed to start getting records. Waiting for compilations or collections never really occurred to me. Patience was never my strongest suit.

Why do you collect records? The rare music? The art? You like a particular medium?
Once I started buying them, I really fell in love with the format and the potential for big, extensive artwork. Even 70inchers had larger artwork than a CD, and I loved opening the sleeve to find label catalogs, stickers, lyric sheets, all these photocopied pieces of paper that fell out. The first time I saw colored vinyl, it blew my mind. It felt like there were all of these surprises that came with records in addition to music I couldn't find elsewhere. I was hooked pretty hard, and as I got older I just started grabbing up everything I could. For a decent amount of time after I started buying vinyl, it was also the cheapest option. CDs would usually run $10-12, but an LP could be only $8. A 7-inch was $3-4. I didn't have much money to spend, so I got the most music for my money. That's obviously way different now, but I'm too far gone to stop now.

What is the crown jewel of your collection?
At this point, I have so many that I consider my top favorites. As far as older records: I have a weird, unlabeled 12-inch that could be a test press or a bootleg or a test press of a bootleg with the Black Flag 1982 demos. I found a test press of New Order's "Confusion" 12-inch single on tour last year. On another tour, I picked up a copy of the Gin Blossoms Dusted LP, which I never ever thought I'd see in person. White Zombie's Psycho-Head Blowout and Soul-Crusher 12-inchers. The Big Black Pigpile VHS/5-inch set. The first R.E.M. single on Hib-Tone Records. A European pressing of In Utero with what some people claim is the original Albini mix of the album (some claim it's not, but it's different enough from the official release that I'm convinced. and it's a legitimate pressing, not a boot). These are all rarer records that I wished I'd find for years, so it's great to have them on my shelves. And then there are more recent bands/albums that have left a huge impact on me that I consider gems. The Hold Steady - Separation Sunday, which I'm really glad I bought when I did. I have every vinyl release by Against Me! and The Ergs!, two of my absolute favorites. I didn't bother with any variants, but I made sure to get them all to have every single song that's been released.

What is your most exciting story wherein you tracked down a record that you wanted?
There hasn't been anything I went out and specifically hunted down, but it felt like a strange coincidence when I got those two White Zombie records. I only really like a small part of that band's discography-- when they were a weirdo 80s noise band before they turned metal. They released these two records, one 12-inch EP and one album, that I'm obsessed with, and of course they're ridiculously rare. I'd never ever seen them in stores and didn't want to pay eBay prices, just kept my hopes up that one day I'd find one in a shop for a relatively reasonable price. If I got really lucky, maybe one day I'd get both. Then I stumbled on the Psycho-Head Blowout EP in a store called Human Head in Brooklyn. First time I'd been there and I walked right past the record, but a friend pointed it out to me as I was about to leave. It was pricey but not prohibitively so, and I pulled the trigger on it. Not even two weeks later, I was in Baltimore at Celebrated Summer and found Soul-Crusher in a new arrivals bin for maybe half of what it goes for on the internet. Couldn't believe I found them both so close together after years of wondering if I'd ever see one in person.

There's the old adage "You never regret records that you buy, but you always regret the one's you don't buy". What record got away from you?
The only one I can think of offhand goes way back. I saw a copy of the first Get Up Kids 7-inch in a store in 98 or 99, but it was $6, which I thought was way too high for a 7-inch. That sentence sounds insane in 2015. No real specifics here, just a lot of records I wish I'd bought on vinyl instead of CD in the mid to late 90s. I got most albums on CD back then, since it was how I was able to listen in my car, and didn't have the cash to spend to buy albums on 2 formats. Nothing that drives me crazy, though.

But, is there any record that you do regret buying?
None I can think of. Anything I ended up not liking or getting tired of, I've sold. I tend to hold on to almost everything, though, in case it needs to grow on me or my tastes come around later.

How precious are your records- That is, do you play them regularly, or do you keep them safe and locked away?
Play them all the time! I figure that's the point of having them - to pore over the artwork and liner notes and take the time to put the needle down on each side. It takes more immediate attention to play a record than put on some mp3s or streaming audio and that's one of the things I really love about the medium. I have to be completely present and attentive. It forces me to be in that moment, focusing completely on the music. I still find I get the most out of a new album when I sit down with the LP and read along with lyrics/notes.

Is medium itself (vinyl, CD, mp3) important to you? Why?
I always prefer vinyl if it's available, mostly for all the things listed in the last answer. If vinyl doesn't exist, I'll opt for CD. More than anything, I want artwork and liner notes and something physical to experience along with the music. Digital is nice and convenient; it's what I use at work and in the car where I can't really look at artwork or lyrics anyway, but at home I always go for my records. Being able to watch a tiny needle pick up huge sounds from some grooves in wax still seems like magic to me. Plus, I also love the little pops and cracks and imperfections inherent in vinyl. I enjoy the overall sound of records way more than anything digital, so that's how I want to listen when I'm at home, as loud as possible.

What's your white whale record?
Oof, there are so many of these, too. The Hold Steady - "Milkcrate Mosh" 7-inch is a really big one for me. I've got all of their vinyl releases except that one single. I feel like I got into them just too late to get a reasonably priced copy of this. Joy Division's Licht Und Blindheit 7-inch is another. There are so few of those and they go for such crazy prices. I'm hoping I stumble on one of those one day and luck out. Also Nine Inch Nails - the Fragile 3xLP, Eels - Electro Shock Blues 2x10", and any Samhain records. I feel like I can at least get bootlegs of Misfits vinyl, but there's barely anything out there for Samhain. It'd be extra cool to get an original one of those, but at this point I'll take anything. The NIN and Eels records will probably get reissued soon as long as vinyl continues to be super popular. I can wait for those.

Do you have a favorite record shop?
Locally, Long in the Tooth in center city Philadelphia has been my favorite for a long time now. Always cool and interesting stuff coming in there, and the people are just the best. I can always talk/debate music with them and have an awesome time, and I regularly find great records. Can't ask for more than that. Co Op 87, Heaven Street, and Human Head in Brooklyn have been wonderful when I've visited them, as well as Celebrated Summer in Baltimore. Any time I'm in those areas, I make sure to stop in and see what's new.