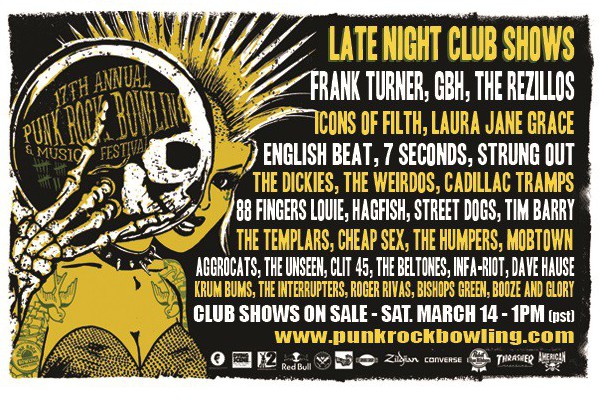 by Armando Olivas Festivals 6 years ago

Punk Rock Bowling is but a few days away, and those of you going may still be debating on which club shows to go to this weekend. With the amount of shows available one cannot be faulted for having difficulty coming to a decision. So to help you out in case you're still having trouble, here are some of Punknews' finest telling you what shows to pick!

While some of these shows may be "sold out," remember that nothing is ever truly sold out if you're resourceful enough. Besides, someone's friend is bound be knocked out from one too many free drinks at the Golden Nugget and their loss is surely your gain. So read on true believers!

Me First and the Gimme Gimmes, Manic Hispanic, The All Brights; The Bunk House

There is only one place to be on Friday Night: The Bunk House. Me First and the Gimme Gimmes will rip through all the frickinâ€™ cover classics -- Billy Joel, Elton John, tunes from the '80s! I know why you are going to Punk Rock Bowling. You know why youâ€™re going to Punk Rock Bowling -- to party. Without question, the Me First show will be the biggest party of the weekend. Plus, whoâ€™s gonna be in the band this time? Will Fat Mike be there? Jay Bentley? Eric Melvin? By now, the band is basically the Wu-Tang of punk rock, except that none of them have ODâ€™edâ€¦ yet. This will be a night for the ages. --John Gentile

If you've ever dreamed of time traveling back to 1982 to catch the explosion of British street punk, you can finally stop trying to buy black market Plutonium from Libyan terrorists. That's because Punk Rock Bowling is giving you the chance to catch three of that era's best bands on one bill. For the uninitiated, GBH, Infa Riot and Abrasive Wheels appear on just about every essential UK82 compilation, but hearing classic tracks like Infa Riot's "Kids of the '80s" and Abrasive Wheels' "Burn 'em Down" live is a whole different story. If you're looking for a club show on Friday night, this one is tough to top --Adam Eisenberg

The Aggroites and Hepcat are easily the best ska and reggae acts that Los Angeles has to offer. So to see the two combine forces for one night in Vegas seems like a no-brainer for all the ska fanatics making the trek to Punk Rock Bowling this weekend. You'll hear all your favorite hits from both of these bands' catalogs, but I would not be surprised if they threw in some classic covers in there. To up the ante you've got the up-and coming-Interrupters to throw a little ska-punk into the mix in the middle slot. If you still haven't been sold then one of LA's finest younger ska and reggae acts, The Bohunks, will be kicking off the night. Not to mention you've got the Low Life Sound System spinning tracks all night as well. If you haven't been convinced thus far I question your sanity! --Armando Olivas

The Rezillos, The Dickies, The Weirdos, The Crowd, Danger Friends; The Fremont Country Club

The Fremont Country Club is where you need to be on Saturday. First of all, youâ€™ll be doing society a public service by invading a country club with punks. Second, absolute legends are playing. The top-billed band is The Rezillos. THE. REZILLOS. PEOPLE. It doesnâ€™t get more legendary than that. Plus, they rarely play America, so this might be your one shot to see â€˜em. ALSO, LAâ€™s first (and greatest?) punk band is on the bill -- The Weirdos. This is a band that took the nasty riffs of the Stooges and just went berserk with it. MUST SEE. On top of that, the Dickies will be there and so will the Crowd! You might not know the Crowd, buy they are an early So-Cal band that sounds like Devo meets the Dead Kennedys. It is poppy, exciting, weird stuff. Top that off with one of the best new synth-punk bands today, Danger Friends (who are just scary and bizarre as hell), and itâ€™s a no-brainer. --John Gentile

Saturday night at the Bunkhouse is your chance to get intimate with two of punk rock's premier songwriters. Frank Turner and Laura Jane Grace are both known for captivating shows with their bands, but they can also command a room as solo performers. Turner will likely share some songs from his upcoming album, Positive Songs for Negative People, while Grace has been peppering her solo sets with stories from past time spent on the road. If you're going to Punk Rock Bowling, this is where you should be spending your Saturday night. --Adam Eisenberg

MobTown is a traditional ska band from Los Angeles that broke up many years ago but every so often decide to jump into the fray and play another show. Easily of one of the best live shows I have ever seen in my life, I would not miss them play because one can never be sure if and when they will play again. Instead of taking a chance that this could indeed be the final show why not put on that Fred Perry and head out to the Beauty Bar. Roger Rivas of the Aggrolites is opening up as well and if you have seen that man perform you know you will leave the show with your face melted off and that alone is worth the cost of admission without even considering the legendary MobTown being on the bill as well. Low Life Sound System will again be providing the jams for you to get your ass dancing in between sets. So be at the Beauty Bar or regret your poor life decisions. --Armando Olivas

If you aren't at the Country Saloon on Sunday night, U R doing it wr0ng. First of all, the headliner is Strung Out. Has any other band so perfectly epitomized what being a '90s punk was all about? Driving tempos, metalish solos and introspective lyrics. This is a band that rocks, that has a brain, too. Plus, those solos, man, those solos! On top of that, you've got 88 Fingers Louie, Pulley and Avenues. This is basically all the best parts of those Fat comps on a single bill. Go to this show. You owe it to your '90s self. --John Gentile

On Sunday night, you could easily mistake the club show at the Beauty Bar for a stop on the Revival Tour. That's because of that tour's biggest names -- Tim Barry, Dave Hause and Kevin Seconds -- will all be performing live. Even better, Darius Koski of the Swingin' Utters is joining in on the fun, bringing songs you may have heard on his recent solo effort, Sisu. If you're looking to end Punk Rock Bowling on an emotionally gripping note, you could do a lot worse than catching this set of troubadors in action. --Adam Eisenberg

Let's start from the bottom and work our way to the top with this one. Chris Murray plays ska on acoustic guitar but has so much energy in his performance it's like you're really watching a three-piece perform. The Skints have crafted an eclectic mix of reggae, hip hop, punk and ska that is unparalleled in the scene. The English Beat are two-tone ska legends that helped paved the way for ska scene for over 30 years. As for the special guest, while I can not reveal the secret I can tell you that if you enjoy ska music in the SLIGHTEST you HAVE to be there. This band pioneered the "Ska-Core" sound way back when, know how to Throw Down even when they aren't in their Home Town, and not to mention they sure do know how to rock a plaid suit. If you aren't there then you wasted your entire weekend. Just sayin'! --Armando Olivas

Tartar Control is playing the Country Saloon on Monday night. Two Mormons with a robot that sing about smoking crack and why you are going to Hell. 'NUFF SAID. --John Gentile