Sonic Reducer : Back To The Future - Tales From Punk Rock's Past 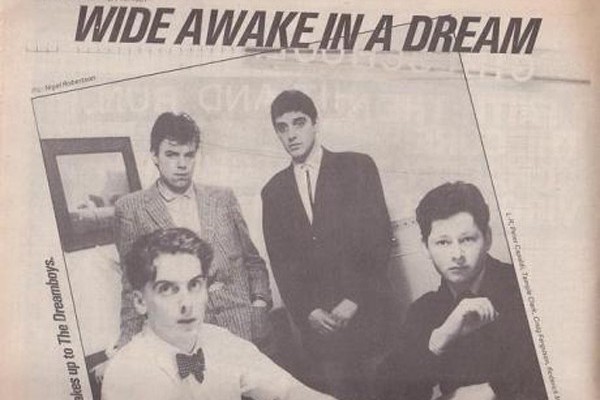 Contributed by johnathon1069, Posted by John Gentile 6 years ago

Today, we continue our recurring series, "Sonic Reducer." In the series, Punknews writers compress a band, genre, theme, or time period into a playlist that would fit on a single CD. Along with the playlist, you'll get either an overview of the topic, such as a band introduction, or a story about how the music in the playlist moved or changed the writer.

Today, Punknews' Jon Gallienne looks at punk bands that featured famous people before they were famous. Check it out below.

Back To The Future - Tales From Punk Rock's Past

Every musician has that first band that goes somewhere, maybe they're not the focal point of the group like they are in later projects, maybe the band isn't even all that great, but it was the first time being a musician seemed like a more worthwhile career option than being a barista, a banker, or working in a kitchen. Many times, a musician will change their image and sound several times before finding the perfect combination of traits that propel them to musical notoriety. When you work in record stores for ten years and spend another five doing college radio, you start digging around trying to find early releases and learn more about the musical past of your favorite musicians.

I've put together a play list of some of the more interesting career paths I've seen while doing this kind of digging. Needless to say, you won't find The 101ers, Rites of Spring, or S.O.A on this list.

1. The Headless Chickens - â€œI Don't Want to Go to Woodstockâ€ When it comes to bands who have earned the respect of their peers and are appreciated across different genres of music, there are few bands that compare to Radiohead. While the band itself has gone through one of the more dramatic transformations of any band that rose up through the nineties alternative rock scene, it wasn't lead singer Thom Yorke's first band.

Prior to Radiohead, Yorke would play lead guitar and provide vocals for a melodic punk band called The Headless Chickens. The title track of their first single was â€œI Don't Want To Go To Woodstock.â€ And while the band would never reach the heights that Radiohead has, they were able to gain some following opening for bands like British rock band Eat and American hip-hop ground breakers De La Soul.

2. Patty Duke Syndrome - â€œMaybe Iâ€ Ryan Adams first notable band was called Patty Duke Syndrome, they're actually the punk band Adams is referencing in the song â€œFaithless Streetâ€ from Whiskeytown's debut when he sings, â€œSo I started this damn country band/Cause punk rock was too hard to sing.â€ While Adams has jumped all over the place genre wise throughout his career, this song is interesting for a number of reasons. The first, I can't believe how young he looks in this video.

Secondly, even early in his career, the abilities Adams had as a songwriter when it came to writing a hook were more than obvious. While the influence of later era Husker Du hangs heavy in this song â€¦ it's still a damn good one. Especially when you consider he was barely twenty years old when he wrote it.

3. Heatmiser â€“ "Everybody Has It" Prior to launching a solo career that would make him standard fare for every sad indie kid in college throughout the mid to late nineties and early into the first part of the new millennium, Elliot Smith was in a rock band called Heatmiser.

While they never achieved the same level of critical or commercial notoriety as Elliot Smith's solo work, they may well be the most well known band to appear on this list. Consisting of himself and Neil Gust on lead vocals and primary songwriters, the band would become a band of mid-level recognition prior to Elliot Smith striking out on his own, simply because he didn't like how his voice sounded over louder music.

4. Maow â€“ "Ms. Lefevre" Prior to becoming one of the leading ladies in alt country as a solo artist and an indie rock superstar in New Pornographers, Neko Case played drums in a number of very poppy punk bands as part of a movement that became known as â€œCuddlecoreâ€ â€¦ no I don't understand the name either.

She did this playing drums in a one of Cub's many lineups as well as in the band referenced here, Maow, while certainly a long way away from anything resembling the pop-punk topping the Billboard charts in the early 90's, it's equally far away from the music she would make a name for herself playing. Plus, it's so catchy it's annoying.

5. Marc and the Mambas â€“ "Catch a Fallen Star" While never fitting into the traditional world of punk rock, Marc Almond's most well known project Soft Cell were certainly New Wave darlings. Outside of singing about tainted love, Marc Almond was making music that would have challenged the fans of his more conventional band. Marc and The Mambas, while not musically out there, definitely challenged their listeners , especially with lyrics like, â€œCan you smell the herpes from the scum sucking fucks?â€ from this song off of 1983's Torment and Toreros which front man Marc Almond would later describe as, â€œattempted suicide put on vinyl.â€

6. The Beatnigs â€“ "C.I.A" Over the past decade, Michael Franti has become a mainstay of the jam band/festival scene with his group Spearhead, who have evolved significantly from releases such as Stay Human and are very far removed from Franti's days fronting the nineties hip-hop band Disposable Heroes of Hiphoprisy. Prior to that, Franti was in a band known as The Beatnigs who played a weird fusion of industrial styled punk and hip-hop and released two albums on Alternative Tentacles.

7. Dream Boys â€“ "Outer Limits" While never achieving fame as musicians, this band was made up of two future superstars. With Craig Ferguson, of late night television fame on drums, and Peter Capaldi, who is best recognized as the twelfth doctor in the Dr. Who series, there may be no other band on this list whose one time members would go on to achieve fame that made them household names.

While certainly not rivaling the abilities of many of their peers, Dream Boys were a more than adept punk band for the era they existed in and â€œOuter Limitsâ€ is certainly a song that will get stuck in your head.

8. Children of the Anachronistic Dynasty â€“ "Sober While" Maynard James Keenan has never been punk in the truest sense of the word, most people who are fans of loud music have, if nothing else, at least been into his band Tool at some point. Prior to starting that band, Keenan was in a band called Childreen of the Anachronistic Dynasty, which in addition to not rolling off the tongue like Tool, Puscifier, or A Perfect Circle apparently also had great difficulty dressing themselves. It was the eighties though, so maybe we should cut them a break.

This early version of â€œSoberâ€ is certainly a far cry from the original, but then again watching this video it's amazing anyone in this band ever went on to make music people would take seriously. For the last two artists on this list, I went in a bit of a different direction. While everyone on this list would go on to make music that would be considered more credible by people who are fans of punk music and any of its sister genres, the next two artists started out on the outside and managed to work their way in. Commence laughter and eye rolling now.

9. Slam Bamboo â€“ "House on Fire" While Trent Reznor world later become known as the brooding front man of Nine Inch Nails, he was at one time a keyboard player in a new wave band called Slam Bamboo. While the lead singers haircut is priceless in and of itself. There may never have been a musician who looked more out of place when compared to the rest of their band than Trent Reznor does in this video.

10. Fastway â€“ "Trick or Treat" While most fans of punk music either love or hate Flogging Molly, there is likely to be less debate over frontman Dave King's eighties music project Fastway. This band is nothing but pure hair metal, of the most stereotypical variety. This track in particular comes from a cult horror film of the same name from the eighties â€¦ Ozzy Osbourne would actually play a preacher in the film. While the band, Dave King included, play into pretty much every clichÃ© of the eighties metal scene, you've got to admit, it looks like they're having a good time if nothing else.

Some of these are more surprising than others, depending on how much you followed said artists career. The interesting thing for me is how good some of this early material is, especially the Patty Duke Syndrome, Heatmiser, and Dream Boys songs for example, and how spectacularly bad, I don't enjoy Maow, some of it was. For me, stuff like this is just interesting and sometimes worthwhile to know. It's always interesting, to me at least, to know where bands or musicians you enjoy got their start and how much they've changed over the course of their careers for better or for worse.