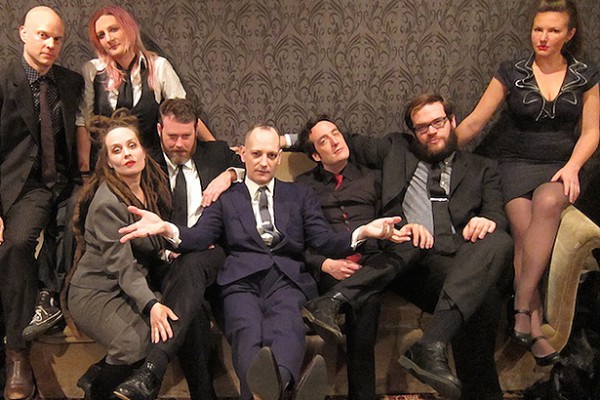 And once more, the most important day of the year for World/Inferno Friendship Society fans doth approach: HALLOWMAS.

The celebration, which takes place on October 31 at Brooklynâ€™s Warsaw Hall is the day where the dead commune with the living, one is free to express oneself however one chooses, and the Great Pumpkin- that fickle, chaotic, ageless entity- rises from his dark abyss and grants wishes upon the sincere, and wreaks havoc upon the wretched. And on that day, World/Inferno, a five to eleven piece band that blends classic 70â€™s punk with blue-eyed soul with big band music (and a little anarcho-punk philosophy) delivers their most impassioned, most complex, most complete performance of the year. Two years ago there was a coffin and entire Gospel choir. Last year they played for two and a half hours. What will this year bring?

In order to learn about this yearâ€™s supplication, features editor John Gentile spoke to Inferno frontman Jack Terricloth about Hallowmas, the latest record This Packed Funeral, and the infamous punk rock riot of 1986.

What should fans expect at this yearâ€™s Hallowmas?
A very long set. Songs that we hadnâ€™t done in so long that I had to look up the lyrics. A bigger band than usual. I think everyone will be happy. Weâ€™ve certainly been rehearsing a lot?

You mention that people will rag on you- but it seems to me, that you are a mysterious guy. There are Jack Terricloth sightings- people will say they saw you walking down the street or in a taxi- but it seems to me that people donâ€™t really know much about you when youâ€™re not on stage. Is that by design?
I think my contemporaries, punk rockers my age, definitely give me shit. I saw Subhumans last week, and people totally gave me shit. They called me by my real name, and I was like, â€œCâ€™mon guys!â€ The young kids pretty much avoid me. I think it is because I am so big and tall and scary.

How were the Orphans, the pre-Mischief Brew punk band, at the Subhumans show?
They were good. I think I like Mischief Brew better. I think Iâ€™m allowed to say that. If Iâ€™m notâ€¦ well, oh well! Iâ€™ve known Erik for a long time. There were a lot of younger kids there, which is good. Because, if there are only punk rockers my age there, we are all in big trouble.

Is for Hallowmas for you, or for the fans? Why do you do Hallowmas?
Well, itâ€™s for us. We donâ€™t really have a difference between us andâ€¦ itâ€™s a community. I donâ€™t have a different way of saying that, I think.

What do you take from Hallowmas personally?
Itâ€™s our New Years eve and all the year sbefore it. it is the day of the day- all the people that weâ€™ve lost, and especially during the previous year. It is their day. It is a temporary autonomous zone where anything could happen. It is a group of like minds embracing life and death and trying to accomplish everything they want to do.

For me, your last album This Packed Funeral, was a triumph of skill and dedication to craft. Do you feel as though you achieved what you wanted to achieve with that album?
Iâ€™m very glad that you like it. We did work very, very hard on it. we did it all in house. Scott Hollingsworth has his own studio so we got to spend as long as wanted on it. Like any album, I wish we could have put some more songs on it. Maybe theyâ€™ll show up later. I donâ€™t think that the story really got fully fleshed out. But, song for song, I am very happy with it.

Oh, I donâ€™t know- even with a concept album, you donâ€™t have to completely detail the story. Look at The Rise and Fall of Ziggy Stardust. If you just look at the story going off the songs on the album, it doesnâ€™t make a whole lot of sense.
Well, if we failed as Ziggy Stardust, then I am happy to have failed.

Is Grace Talicious, the main focus of the album, finally put to rest?
Weâ€™re doing a bunch of new songs from the record, but that record has had closure. I realize that sounds like Iâ€™ve been in therapy, but Iâ€™ve never been in therapy, which my friend did not believe the other day. So, that story is done.

What is the record that you would part with last?
okay, Iâ€™m going to be totally old school here. The first dag Nasty record, Can I Say. Some of you might think that this is out of character, but I love that record.

Speaking of old records, what can you tell me about the 1986 riot at the Knights of Columbus Hall?
How did you even hear about that?

I have my â€œresources.â€
Well, okay! That was a crazy ass, fucking riot. My very, very first band, Neurotic Impulse which is the only tattoo that I have- they went on to form Vision after they kicked me out which Iâ€™m still mad about, those bastards. I probably shouldnâ€™t name names because some people got really badly hurt. It was at the Knights of Columbus hall and we put on a show.

It was a complete melee. I probably still have post-traumatic stress from that. I remember dragging my friend out from the club, who was bleeding from the head, I was dragging him by the feet. I threw him in a bunch of bushes so the police would tip hitting. It was crazy shit. I donâ€™t think shit happens like that anymore. But, that was common for punk rock in the eighties.

Thereâ€™s a lot of talk of punkâ€™s â€œglory daysâ€ when the police would come in and fight the audience. Shows arenâ€™t violent like that anymore. Is that a good thing or a bad thing that shows arenâ€™t that chaotic anymore?
I donâ€™t think anyone should have to go through what we went through. You really took your life in your hand just walking out the door. If it makes the kids a little more lazy, God bless â€˜em. Walking out the door was like getting in a fight. Iâ€™m happy that the kids donâ€™t have to go through that.

For you personally, why was it worth putting your freedom and very life on the line, just to go see and play music?
Like any artist, you have to express yourself. Van Gogh cut his ear off. He had to yell out this what I mean and this is what I believe in. Why fight against apartheid? Why fight for civil rights? Itâ€™s because you really, really mean it. You have no other way to rebel or make yourself free. Letâ€™s face it, blue tri-hawks look silly. But, if thatâ€™s how you express yourself, so be it. Luckily for me, I found music, so now I can dress like a Hasidic Jew. When you canâ€™t do anything else, you change the conversation.

How did you get interested in punk rock in the first place?
There were a bunch of scary kids that used to hang around the town that I lived in. they hung out by sunset lake. I guess you would call them â€œproto-punks.â€ Iggy Pop types. They had long stringy hair. They were scary mother fuckers. Many of them are dead now. A couple of them are still in jail. I had to express myself. Weâ€™re all from suburbia somewhere unless you grew up in the city. You have tog et out and define yourself. I had to get out and even when I was not very good at it, punk rock is a great way to make things very, very loud.

You mentioned that a lot of the early punk rockers that you knew are dead or in jail. How come you managed to stay alive and managed to not go to jail?
Luck. I didnâ€™t start drinking and doing drugs well into my 20â€™s. Just luck, though. People I know who got signed to major labels during the grunge thing. They were like â€œweâ€™re gonna make it!â€ Thye didnâ€™t and then gave up. I never had a â€œweâ€™re gonna make it!â€ so I just kept working hard. I have to give credit to my co-founder Scott Hollingworth for always saying, â€œLetâ€™s do it another way.â€ We never wanted to follow trends. We just let the sounds go where they go.