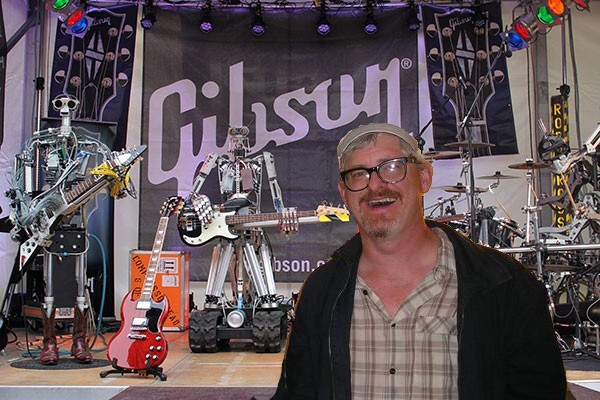 You all know John Wright. Heâ€™s the legendary punk musician that drummed for Nomeansno, who were one of the bands that took punk from simple-three chord bashing to alternative avant-garde ruminations to complex, shifting arrangements. If anything, Nomeansno are champions of thinking manâ€™s punk rock. Heâ€™s also the vocalist for the hockey-themed Hanson Brothers who revel in ye olde three-chord bashing.

Well, now Wright has hooked up with Compressorhead, the trio of Robots who kick out driving, grim and gritty punk rock. That is, Compressorhead are not three guys dressed up as robots, they are actually robots that play instruments- there is no pre-recorded audio backing track for these modern marvels.

Well, now the droids are manufacturing a vocalist unit to add to their group. So, they asked Wright to write some tunes for them. Punknews spoke to Wright about what itâ€™s like to pen tunes for cold, metallic hands.

When you were in grade school, were you a fan of Sci-Fi books and movies?
Oh yeah! Of course! When I was a kid, I was totally into comic books, and science fiction, and all that fun stuff.

What attracted you to the concept of the â€œimpossible?â€
Itâ€™s a good question. I think itâ€™s just a fascination of what is possible or what could be, given the right circumstances both positive and negative. Itâ€™s about looking forward. Iâ€™ve always been a sort of looking forward type person than a looking back type person.

What are we to take from Compressorhead? Is it a statement on technology? Is it an art piece? Is it a fun diversion?
Well, I think what we are trying to do with the robots is to make them as unrobotic as possible. We want them to play like any other band. The music is not futuristic. Itâ€™s sort of a throwback, really. The music is straight up punk rock, even Motorhead type stuff. Itâ€™s not what you would expect robots to do. In fact, the robots pretty much donâ€™t do anything that you would expect robots to do. What would you take away from it? I suppose the same thing if you were to go see the Ramones.

Whatâ€™s it like writing for mechanically precise machines?
The fact of the matter is, when musicians play together, you can anticipate and you can play off one another and ideas can come fast and furious as you are playing. Writing for robots, you have to write everything ahead of time. All the goofinâ€™ around is done in your head. I hear the robot playing and you realize that they can do some things better than others. You try to bring out what they are best at and bend that together.

What are the robots like when you present songs to them? Are they grateful for the tunes or are they surly?
They just want to rock. they are completely open to anything that I bring as long as I am bringing balls to the walls rock. Thatâ€™s what they want to do. They donâ€™t want to play techno.

Should I be worried about them going berserk and wanting to kill all humans?
Oh, no no no no no! They donâ€™t want to take over. Thatâ€™s too much responsibility.

Iâ€™m pretty sure that these are the first sentient robots playing music that weâ€™ve seen. When they see more primitive music machines, like a Roland 808 drum machine or even a turntable, are they like â€œthereâ€™s my grandpa!â€ Or, maybe they seem them as lower forms of life?
They see these as inferior precursors. They are not able to rock on their own and the robots are able to rock on their own.

Can you tell us any songs, or any themes, that you are working on for the robots?
Well, we have some rock and roll firsts. Iâ€™ll let the cat out of the bag that there will be the first rock and roll song about speedwalkers. It is called â€œSpeedwalkinâ€™ Ladies.â€ I think it is a music first. I canâ€™t think of any other sons that chime about that topic. We have the title track â€œCompressorhead.â€ They do get obsessed with flesh occasionally. Meatbags are confusing and flesh is a barrier and they are trying to break through it.

They see flesh as a weakness?
No, no, no. Just as a barrier and they are trying to break through.

I am reminded of Flowers for Algernon. Do they understand the incredible strength that they wield?
Actually, you have to be careful around them. Especially, Stickboy, those arms are swinging and if you are in the wrong place in the wrong time, he doesnâ€™t care. He is just playing. The bass player weighs about 500 pounds.

Do we know where the robots came from? Were they assembled by humans? Are they some mysterious alien object?
We donâ€™t really know. They just showed up. they contacted me and said they needed my songwriting abilities because they wanted to rock. I said â€œokayâ€ because I was up for a challenge.
Whatâ€™s your opinion of the recent trend of holographic performances from the likes of Eazy-E and Tupac?
Well, itâ€™s empty of course. Itâ€™s unlike the robots. The robots are really there and they are really playing. They are generating and making everything you are hearing. They are making the music themselves. The holograms are a facsimile. Itâ€™s like going to see Courtney Love.

Now, youâ€™re a beer connoisseur, arenâ€™t you?
Well, I guess to some degree, I do enjoy the malted beverages. In fact, six cases of a certain beer jut showed up at my door today.

Do you have any recommendations for the season?
I am a huge fan of the smoked beers, smoked lagers. I think they are not as popular as they probably should be. For me, the winter is Lager season. I make lagers and they like to be made in the winter. Summer is for ales.

You make your own beer?
Oh yes! I make lots of beer. Now that the weather is getting colder, Iâ€™ll be making lagers from now until March or April.

Does the creation of a beer require a special artistic touch? Can you make a beer a special â€œJohn Wrightâ€ beer?
Oh yes, most certainly! Beer making really is knowing your yeast and manipulating your yeast. It is a living creature and you can get it to do all sort of things if you have that nice touch. There really is quite a bit of artistry involved.

Well John, you are manipulating both synthetic and living life forms. How circular! And speaking of the circular, are there any future plans for Nomeansno or the Hanson brothers?
Well, my brother is on a little bit of an indefinite hiatus as he is a young father at the age of 61. He has two little kids that he is spending time with. Weâ€™re in no hurry, but when he is ready, we will get back to playing. Iâ€™ve been so busy with the robots and pursuing other ideas as well. For now, Nomeansno and Hanson Brothers are on the back shelf. I am hoping that the Compressorhead record is recorded and on the shelf by June of next year.