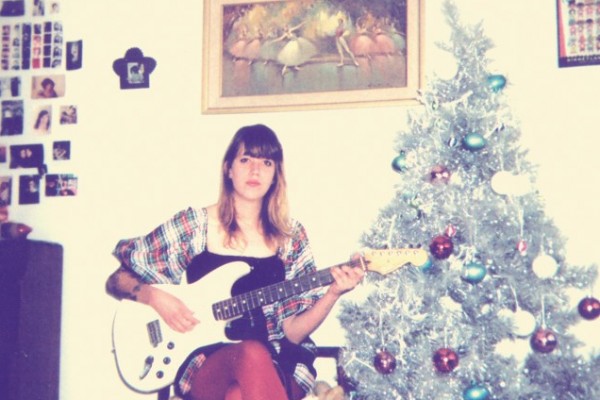 Cassie Ramone is a modern day punk rock champion and if you donâ€™t think so then you are wrong. She kicked out jangly pop-punk that had hints of Neil Young in Bossy. Then, she forged a radical new sound in Vivian Girls by bending girl group harmony around a hardcore combustion engine. And just when that was hurdling along, she formed the Bob Dylan-as-basement-show-rocker stylings of the Babies with Kevin Morby. No matter how fast you go, sheâ€™s always three steps ahead of you.

To that end, sheâ€™s about to release a straight-up Christmas album. Say whaaaaat?! Thatâ€™s right. Ms. Ramone is going where few indie-punkers have gone before. A stone cold, earnest, Christmas album out this December via Burger Records. (Oh yeah, right now, sheâ€™s also in a college-rock band and a punk band that is obsessed with OCD.)

So, to learn about Cassieâ€™s history, Punknewsâ€™ John Gentile had Cassie talk about all her different bands and just what X-Mas means to her.

When did you first start playing an instrument? I was like eight. I started on Saxophone. I played saxophone until I was 14. When I was eleven I started playing piano. I picked up a guitar was I was thirteen.

How did you first get ahold of a guitar? I dunno. I just really like admire people like Courtney Love and Shirley Manson and they inspired me when I was a pre-teen- When I started being into their music and I wanted to play guitar. I basically just bothered my parents and begged for guitar lessons. My parents were supportive. They may not have been so into the idea of me playing guitar. They wanted me to stick with piano. I just really wanted to play guitar. After enough begging, they were like, â€œOK, cool, we get you as guitar and have you take lessons.â€

My first band was called Upholstery. It was my band from high school It was my two best girlfriends and our guy friend. It was very beat happening. It was kind of like B-52s. We recorded everything on cassette four track. It was just like fucking around. I think we were a really creative and fun band. We recorded two albums. We recorded one ourselves. Then, we re-recorded most of those songs again with our friend. We never really released it. For our first album, we made cassette copies and gave them to our friends. The recordings are out there, but theyâ€™re not like readily available.

anything from UPHOLSTERY on Myspace.

Then, how did Bossy form? I moved to Brooklyn. I just feel in with some other kids who were also in bands and making music. My friend Jamie and I would hang out after school and watch the news. He didnâ€™t go to college. I would just go to his house after school and watch TV with him. He was like, â€œDo you wanna jam?â€ I was like â€œYeah!â€ So we formed a band.

And then, near the end of Bossy, Vivian Girls comes together. Yeah, basically. Bossy was entering a period of being inactive. Frankie Rose asked me if I wanted to jam, so I said yeah.

Is that when you adopted the â€œRamoneâ€ nom-de-plume? Iâ€™ve been Cassie Ramone since I was 16 or 17. My friend just started calling me that. Iâ€™m pretty indifferent towards it at this point. Itâ€™s really just a name now. My real last name is so cumbersome, I sort of need another name last name. It works, itâ€™s fine. I donâ€™t even care that much to be affiliated with the band the Ramones. I mean, I love the Ramones, but itâ€™s not like super homage, or anything. Itâ€™s just a name.

When you write a song, how concerned are you with your influences? Itâ€™s more organic. There are definitely times when I am really inspired by a song or a band and Iâ€™m like let me see what I can make with this influence of mine. But when I do that, it hardly ever sounds like what Iâ€™m influenced by. Even if there is a framework, there it never comes out the same way.

What I liked about Vivian Girls was how there were hardcore parts, doo wop parts, indie rock parts, and other styles. How tactical was the creation of the Vivian Girls sound? We kind of had a plan. We wanted to be the Wipers meets Girls Groups. That was our basic framework. From out of that, we cobbled together music that we all liked and music that we felt capable of writing. It happened organically that way.

As viewed by the Internet, it seems like there was a flash and then all of a sudden, Vivian Girls were everywhere. Did you feel that at the ground level? I definitely felt it in my real life. Before that album as released, we were playing so many shows and touring really hard. We were working really hard locally. So, I think just because we played so many shows, it came through in the real world.

I love the third Vivian Girls album because it has the â€œclassicâ€ Vivian girls sound, but also has some really weird, and some really retro parts. What was the creation of that album like? That album was pretty planned out. that album is weird for me because we were going through difficult times as band and individually. Out of the albums that I recorded, that one makes me a little sad because we were not in the best place in our personal lives at the timeâ€¦ at least I wasnâ€™t. I was kind of really depressed that year. We were trying to make it different. Maybe we tried too hard. I havenâ€™t listened to it in a long time.

Vivian Girls kind of faded away before those last few shows. Was the end of the band a relief? Was it sad? Was it both? It was really sad. I wanted to do another album but we agreed that it probably wasnâ€™t going to work out, so we decided to end it. We were all in different places and I think Katy wanted to focus on La Sera and Allie wanted to focus on Upset. I was like if we do another album, we have to give it 110% and I think I was the only person in the band who was like in a place that wanted to do that.

The Babies started around 2009. It was kind of a simultaneous band with Vivian Girls. We didnâ€™t do nearly as much. Both bands existed simultaneously for a while. We definitely started just for fun. Itâ€™s so anti-climatic. every band I start is just for fun and sometimes it works and sometimes it doesnâ€™t. Sometimes certain projects I have go further than others. I have tried starting other bands and it just never went very far. Itâ€™s always letâ€™s get together and jam. It either sticks or it doesnâ€™t.

When you are writing for different bands, do you write in the same style or do you have a different approach? When I was writing for both bands, I would just write songs. If a song sounded more like a Babies songs, I would present it as that. But, most of my songs were Vivian Girls songs.

What were you up to after the end of Vivian Girls and your first solo album? Oh, nothing good. I was just kind of like fucking around. It took me a very long time to record The Time Has Come, not because it was super technical, but because I would put it aside because I was sick of working on it. The album took me about a year and a half to record total. I would be working on the album a little bit and then give up and start again.

I was pretty inexperienced with recording myself. I would just go for it and give it a try and see what happened. I recorded stuff with my first band on eight track. Iâ€™ve made demos on garage band. But, I never tried to record something that was releasable myself. It was challenging for me and I just wanted to record it and see what came out.

Melt is the project of my good friend Dylan white. He is the man singer-songwriter. I was living in New Jersey for a really good chunk of 2014. Dylan was also living in New Jersey. We were both at our parentsâ€™ houses. His parentâ€™s house is like half an hour away from mine. We would hang out a few times a week. Itâ€™s the same thing. I was hanging out with him in his parentâ€™s home town. He said â€œdo you want to try playing bass for these songs?â€ I said â€œsure, Iâ€™m not doing anything else.â€ It was really fun. I think he is a really, really talented song writer. Itâ€™s a style that I love, but I donâ€™t write myself. Itâ€™s a great thing to be a part of because I donâ€™t write songs like Dylan does. We just have very different styles.

Me and OJ toured together in Europe I late 2013. We did a month long European tour, solo together. He was dong X-Ray Eyeballs solo and I was doing solo sets. He was really fun to tour with. You form a bond with someone when you tour with them, obviously. We just decided to fuck around and write some punk songs and do something super fun and super simple. Basically, just freedom. Knowing you can do whatever you want to do.

How important is the concept of punk rock to you? Some people see it as a sort of Holy Grail. Some people see it as a useful style or genre to be applied when needed. Itâ€™s pretty important to me in the sense that I hate rules. I hate limits. I like the freedom of expression that comes with punk. But, when punk gets too- there are sects of punk that have a lot rules and limits. I donâ€™t like that. Iâ€™m inspired by punk music. But, at the same time, I do love more highly produced music. I love Burt Bacharach. I love like Steeley Dan and more technical shit. For me, itâ€™s draining inspiration from different sources. I donâ€™t even know if I consider myself punk anymore. Itâ€™s definitely something that I respect a lot and love.

I thought a Christmas album was a really weird idea. I wanted to do it because I love Christmas music. Itâ€™s pretty rare for an artist as small as me to do something on thatâ€™s scale. I know a lot of artists around the same size as me will do a Christmas single or seven inch, but to do a full album of all covers, as far as I know, has not been done by someone as small as me. People like Mariah Carey do Christmas albums, but not people like me.

Itâ€™s not ironic or snarky, but there is definitely some mixed emotions there. I really do love Christmas music and the Holiday spirit, but I have a very complicated relationship with the Holiday itself. I would say the album is neither genuine or snarky. Itâ€™s a really weird album I think.