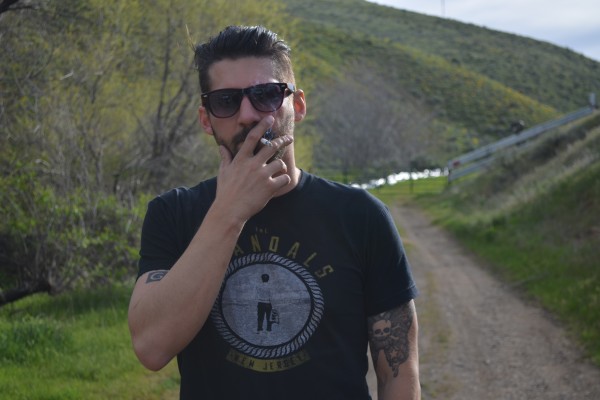 by Samantha Barrett Interviews 7 years ago

SoCal-based Sic Waiting has been around since 2000 and has been churning out melodic punk tunes for more than 15 years. They recently put out a brand new release titled Derailer on Felony Records. Editor Samantha Barrett met up with Jared Stinson in a coffee shop in Brooklyn to discuss the new album and how their recent tour went.

So this is a first for your band on Punknews. Tell me about how you guys formed?
15 years agoâ€¦ [Laughs]â€¦ I moved to San Diego 15 years ago and was driving around. This was before I used a lot of the internet, it wasn't the way it is today. I was just driving around looking for this music studio I heard was nearby. It was called Goblin Studios. The owner has just purchased it and wanted to start a punk band and I was looking for a drummer and he played drums so it became my home base for 10 years. We started the band with a couple of other guys that I had just met through school. We put out a lot of really bad records you will never hear again. We just kept on going through the years, a lot of people has come and gone through the band. Nobody that started the band is around except me.

What are some musical influences that lead to you produce the music you guy make?
Itâ€™s all James Taylor.

That's it?
That is actually not a lie, I love James Taylor. On the punk side of things, I grew up listening to Strung Out, Fat Wreck groups and the mid-'90s Southern California melodic punk, that was how it kinda started. I love the bigger old school bands like The Clash. I actually became a really big fan of Angelic Upstarts from the UK. I love Rise Against still… and that whole group shaped the punk that we create but that is definitely not the only thing that shapes the punk that we play. There is a guy that currently plays out of Oklahoma named John Moreland that is un-fucking-believable. He is probably my favorite artist right now.

You guys just released a new album titled Derailer this October. Tell me about the new album? What led you guys to make another record?
I ask myself that too. [Laughs] I had a few new songs written, the band has always been up and down with us, because it is not so stable with members. It's not that traditional story of four buddies that grew up together that were inseparable, it's not the way it is with us. All the people in the band are all friends but the band is not solid like that.
We had a few songs, my guitar player back home, Anthony Ciandella, was talking to me about it and we built out the songs I had. At the same time we met Chris Chasse who used to play in Rise Against and now plays in the band Great Collapse. I had asked him to record one song for us, which was a Tilt cover song for a Fat Wreck documentary. He couldn't the day we needed to do it so I asked if he wanted to record four other new songs and he said yeah, so we came in and the recording went really, really well. In a short spurt we wrote a few more Sic Waiting songs. We wrote eight songs with Chris. We sat on them for a bit and last June went back and finished it. The fact that Chris was there willing to work with us, was stoked about recording and it was going really, really well kinda kicked us in the butt a little bit. Itâ€™s called Derailer, which is really accurate title with what really happens with this band, tour and everything.

How does this album differ from your other releases?
This one is a little bit better rounded. To be honest there are a couple of songs in there that people have been listening to for a while and they were like, â€œWoah, thatâ€™s not what I expected!â€ It flows from beginning to end better than the other records too.

You guys just toured to Fest FL, Puerto Rico and the east coast, How has that been?
Tour has been intense. It's been great through. We did four southwest shows before Fest and those shows were great. Fest was amazing. I have never ever been so just to be there was cool. To play shows and get a really good response was great. Met a ton of people that I have been talking to forever. Fest was an amazing experience.
We went to Puerto Rico after that and that was crazy. So crazy! It's like the wild west in Puerto Rico but the people are so cool. We were hosted by our friends D-Cent Jerks who are from Puerto Rico, they are one of the bigger ska-punk bands on the island so they took us all round. We got to see the local side of things, so many amazing experiences, it was so fun. Then we flew directly up to the east coast. We have a pretty good network in the northeast. It went really well as well. It was better than I thought it would be.

What is in store for you guys in 2016?
Weâ€™re working on Europe now. We have never done Europe. I have played a couple of solo things over there but we've never done Europe as the band. That's kinda the next step. We have done so much US touring that the next feasible step with the people that we know and the help that we can get would be going there. Weâ€™re looking at Europe in the springtime, thatâ€™s the goal, and the west US because we haven't gone there yet with this record.
I will do Fest and Puerto Rico every year so maybe that. [Laughs] Europe is the focus for now, for the spring. Hopefully that will work out or we'll just quit. [Laughs]

Besides you guys, are there any other local SoCal bands you think we should be listening to?
Oh for sure. this year has been pretty great for San Diego bands. Thereâ€™s a band called Caskitt that played Fest also, they just put out a record. A band called Western Settings they just put out a record this year. Anthony, our guitar player, is in another band basically a lot like us but faster. They are called Lowbrow. Divided Heaven, Castoff… there's a lot of really good bands coming out of the area. It's kinda like a cycle, in the mid-2000s there was not a lot going on and now there are some bands that are starting to get active again.