What Are You Listening To Right Now? 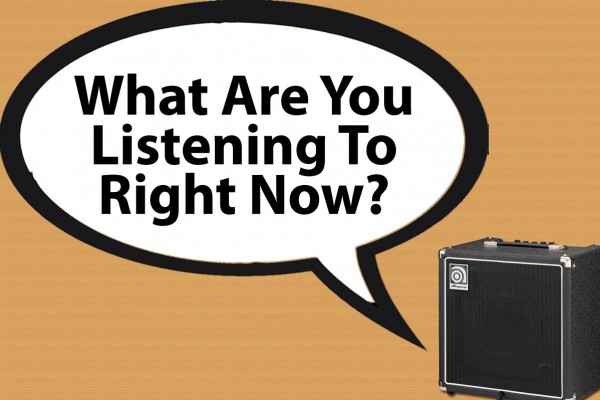 Welcome to the another edition of our newest feature, What Are You Listening To Right Now? Today we're bringing you a another rundown of what we've all been listening to lately. The goal is to introduce you to some new music, whether it's an obscure demo by a band you've never heard of, a debut record that's turning heads or an old classic that may have flown under your radar the first time around. And it's not just about us. Over time, we'll include picks from band members, label bigwigs, music journalists and members from all corners of the punk rock community, and we want to hear from you, too, so be sure to share what you've been listening to lately in the comments section. You might just help us discover the next big thing.

This was a record I missed out on big time. Like, six months after it's released which I regret as it definitely would have been number one on my year-ender. It's an album I still listen to at least once a week. I love records with personal themes touching on real-world issues. Funny enough, this album's message started to resonate with me more only last year on the heels of the last Wonder Years record which played off the theme of failing to save a drug-riddled friend as heard on the overarching "We're no saviours if we can't save our brothers" -- on quite a few songs. That's when I started to appreciate The Future Is Cancelled even more. Not only is it a perfect blend of punk/post-hardcore but there's a swell of urgency in it that really hit home on songs like "Lake," "Brother" and "Shoddy Workmanship." The latter two especially fucks me over on the line, 'Things just have to change. My brother…are you okay?' A lot of depth to a record where you can't find a bad song. Throw in the familial ties to bands like The Menzingers and Tigers Jaw, and you've got yet another reason to dive right in. -- Renaldo Matadeen

JMan and Big Mill are the dual vocalists behind SIDEMAN, a hardcore act out of Welland, Ontario that bears some explanation. JMan is Justis Krar, one of Single Mothers' guitarists, and Big Mill is Ross Miller, a session player/friend-of-everyone in the Niagara scene who's played with or in just about every other band I've ever seen, notably with the post-Attack in Black groups (Daniel Romano's Trilliums, Marine Dreams, etc). Seeing SIDEMAN live you'll get an immediate early Beastie Boys vibe, partly from Krar's bratty nasal vocals and the interplay between the two singers, but also because the band's stage presence is so funny. It took me a few songs to even figure out if SIDEMAN was just a big joke about hardcore tropes, but it's all too well written and performed to be merely that. -- Adam White

I'll just say it -- I did not expect the new Harley Flanagan solo album to be as good as it is. Sure, Age of Quarrel is an absolute masterpiece, but every single Cro-Mags, Flanagan or John Joseph release since then seemed to echo "if only…" "what if…" "I wish…" However, the new tauntingly titled Cro-Mags finally finds Harley doing what he does best -- super-fast, super-hard, super-aggressive punk rock songs. And where these songs rise above is that, sure, they're really mean, but they still have that core snap of classic punk at the bottom. "I Come in Peace" slams like thrash metal, but it also swings like Chuck Berry (if you listen really, really closely). -- John Gentile

I have been seeing A.P.P.L.E. patches and logos fairly often online or when Iâ€™d go to shows and I had never heard of them before. That all changed when I went to Radiation Records in Anaheim, California. I saw one of their records for sale there and I (stupidly) didnâ€™t buy it. But after that I went home and decided to stop putting it off and finally took the time to find out what this band was all about. What I found was that A.P.P.L.E. is a criminally overlooked band. Influenced by a wide variety of artists from Crass and Rudimentary Peni to Jimi Hendrix and Black Sabbath, they were one of the first anarcho/crust punk and peace punk bands when they were first active between 1984 and 1988. Plutocracy = Tyranny & Exploitationâ€™s eleven tracks go by fast, but definitely look out for the track â€œPeace is Possibleâ€ and their amazing cover of Bob Dylanâ€™s â€œBlowing In The Wind.â€ For what this band sounds like and for what their lyrical messages are, they were easily 25 years ahead of their time. You wonâ€™t find A.P.P.L.E.â€™s music on iTunes or Bandcamp, but you can definitely find their material on YouTube and Discogs. -- Ricky Frankel

I am currently binging on Poison Idea in anticipation of seeing them live later this month. I will be attending what will be only the second Michigan show in the band's 35+ year history. I can't claim to have the band's entire discography, but I'm listening to what I've got: Confuse & Conquer, Kings of Punk, Pick Your King, Learning to Scream, Record Collectors are Pretentious Assholes, We Must Burn and Blank Blackout Vacant. Whether it's the one minute hardcore songs or the more rock and roll oriented stuff, I've been loving it all. Everything Poison Idea has done has a caustic, hostile edge. To me, it's what punk is all about. -- Tom Crandle

I recently listened to an amazing podcast about the story of Drive Like Jehu on Kreative Kontrol, a podcast named for a post-Jehu Hot Snakes song. I have been a fan of Drive Like Jehu for quite a while, a band I came around to after Fugazi, Sonic Youth and other dissonant guitar music started making sense to me sometime in my late college years, around 2002. But in 2002, Jehu was long over but vocalist/guitarist Rick Froberg (also of the late Obits) and guitarist John Reis (also of the late Rocket From the Crypt) had a band called Hot Snakes going strong. I grew to like Hot Snakes even more than Jehu because it was just so primal and not as drawn-out. The songs are two-and-a-half-minute bursts instead of five-to-ten minute noisy jams. The album Suicide Invoice, their second of three albums, is my favorite. Check out â€œHate the Kids,â€ â€œLAXâ€ and my most-most-favorite song â€œPaid in Cigarettes.â€ A biting political statement about… some 2002 politician who smoked maybe, it rocks so hard with an amazing vocal delivery from Froberg and Reisâ€™ always incredible guitar work. That moment at 2:05 when it goes into 6/4 with that guitar riffâ€¦ DAMN. And lucky you, they have reunited and are playing shows again. Go see them, you wonâ€™t be disappointed. --Greg Simpson

Donovan Wolfington -- How To Treat The Ones You Love

Overlooking How to Treat the Ones You Love at last yearâ€™s end, especially after the amount of time I spent listening to it, was criminal. Well itâ€™s a new year, and Donovan Wolfingtonâ€™s album has only gotten better with (slight) age. The fuzzed-out indie punks paint a true-to-life picture of being quickly forced out of their comfort zone. While there are other elements, itâ€™s mostly distorted, catchy and fun, especially opener â€œOllie North.â€ While the music isnâ€™t always positive, the young New Orleans band still sounds like theyâ€™re having some fun. Growing up may not be easy, but soundtracking it with this gem of an album certainly helps. -- Nick Poyner

We could probably argue for days about which of the Ramones' first three albums is the best, and we'd never come to reasonable conclusion. None of us would be wrong, and none of us would be right. That said, I'm sticking with Leave Home, the band's sophmore effort, which took everything the self-titled debut did well and amped it up a notch. Joey's vocals are a little bit sweeter, Dee Dee's bass is a little bit rumblier and Johnny's guitar is a little bit buzzsaw-ier. This record, along with the first one and Rocket To Russia, provided the songwriting templates for every pop-punk band ever, and it's easy to see why. It's the kind of record that even a curmudgeon like me can still enjoy, and my two-year-old can dance right along with it, too. Though I'm still not sure she's old enough to know what "Carbona Not Glue" is about. At least not yet. -- Adam Eisenberg