Talking about being an adult with Steven Rawles of Belvedere 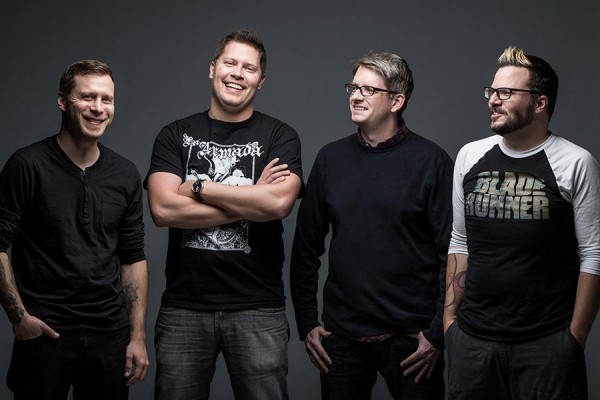 Time has a weird way of flying by so quickly sometimes, it really is the case for Canadaâ€™s Belvedere. It has been long 12 years since they have has put out a new album. The band has returned with 12 new melodic punk tunes and is excited to share them with the world. The band is releasing their fifth full-length titled The Revenge of the Fifth on May 5th, 2016. Editor Samantha Barrett spoke to Steven Rawles about the new album, growing old and being an adult.

You have a new album coming out, Tell me a little about the new album?
Itâ€™s called The Revenge of the Fifth and this will be our first album in over 12 years. Fast Forward was, I think, the last one that came out. I am super pumped about it, itâ€™s about 12 songs. We spent about a year and a half part time writing it. Everybody has kids, jobs and all of that stuff now so we don't get a chance to practice that much now. We wrote it over about a year and a half and we recorded it in about two months at our drummer's studio. We mixed it in about a week over at the Blasting Room in Colorado. Itâ€™s coming out on Bird Attack Records as well as some other great labels around the world, Effervescence and No Reason Bells on Records, Lockjaw Records in the UK. There is a lot of great people that is working with us, it's just been a really great vibe writing and recording this record. The best that we have probably as a band put out. Maybe that what maturity does to you, I dunno. Not that were mature, were just older.

You guys did a reunion a few years back in 2012. What was it that got the band back together?
At the end of 2011, our buddy J Cloth in Guelph. We always stayed in touch and he helped my band This Is A Stand Off. He just said it was time for Belvedere to do a reunion. At that time I said, â€œAh, there was no way Belvedere would get back together, again.â€ He was like â€œno it would be great, it will be at the Opera House.â€ Right away I was like â€œthere was no way for us to be able to headline the Opera Houseâ€. So I reached out to Jay and Scott and Graham and we started talking. We realized we all wanted to do it. We played a show at Guelph. It would be the final show that our buddy â€œJâ€ would put on, that was fun, that show had a killer lineup, it was so cool. We were talking backstage with Grade and Moneen, â€œhow has it that we never played a show together?â€

Really?
Moneen would come out to tour and we would all tour and play these shows with the same promoters at all of these towns but we never played a show together till that show in Guelph. It was like â€œoh look, there is a Moneen poster, look they will be here next week.â€ Itâ€™s really funny, we always ran into each other but have never played a show together.
We ended up playing a some shows in Canada, Toronto, Montreal and we did Calgary and Edmonton out west here. Then we got Grozrock in Europe and we did a Brazil tour. All of these things just started to fall into place. That was it for a couple of years. We just did a few random shows and festivals and I guess as time went on, we realized we wanted to put out another record. So here you go, here is another record.

Itâ€™s been 12 years since your last release, how has the time affected the direction you guys took with this album?
I dunnoâ€¦ Everybody has been doing different things with bands since then. We all have been active in some way. I dunno, lyrically I can really speak for. I feel like I am writing different things I have a young son and I am married. I have a different perspective than when I was 25, I think about things very differently than I did then. Lyrically I have grown a little bit and I think about different things maybe a little more direct than what I am speaking about. But as far a music goes, I feel like we just all got together and really took our time and tried to spend as much time as we could to developing the songs. That is one of the biggest things about us, as kids, we would just pump out an album then tour. Then go â€œHey, it's time to put out another albumâ€, and that was back when we were touring 9 months of the year. We donâ€™t do that anymore, we can actually sit there and think about a song for about 6 months and that's ok because there is no deadline. We just wanted to put out the best thing that we could. We did some sort of quick demos. Our drummer, Casey Lewis has a studio, we were able to take advantage of that and we demoed almost every song on the record and took it home and worked on it for a couple of months and tried to make it better and I think made for a much better album overall.

You guys just toured South America, How was that experience? Was that your most extensive leg of touring since you got back together?
That was awesome. I love South America, I've been down there a bunch with Belvedere and This Is A Stand Off. I've even gone on some trips with my wife down there. I just love it. The people is great, the shows are killer. To be able to go down there to play with your band and to tour with Adrenalized, Mute, and Lagwagonâ€¦ It doesn't matter how much of these tours I do, I kind of have to pinch myself a couple of days on tour to make sure this is happening. To be able to go to Columbia, where we haven't been in like 12 -13 years, Chile and Peru which we have never been before. To go there and there is like a thousand kids at the shows singing every word, it just it really awesome, I personally cannot take that for granted. I just think it's amazing.
What was the other part of the questions? Oh yeah, extensive? Sorry, I am babblingâ€¦ We did one 2 week tour in Europe a couple years ago and that was the most extensive. I think this was at 12-13 days so not quite the longest but this is about the longest we can go. South American tours are kinda funny that way because we kinda flying almost every day so it is kind of different from European tours, where you fly over there and you hang out for a month. Itâ€™s a lot of early mornings for sure. Back to the hotel at 2 am, up at 5 am.

Tell me a little bit about the song â€œHairlineâ€? Why did you choose to release that song in particular?
That was one of the first songs that we wrote for the record. I was thinking a lot about being reflective of your life, started by coming up with this idea of someone winning the lottery and going to Mars. It's kind of a first person account and things get really messed up and the ship diverts itself into the sun and everyone dies. It's basically that sort of thought process and reflection that you have about your life facing all of the things you should have done and the mistakes that you made, yeah that is basically what the song is about. A little out there but makes for a fun chorus.

This one is a little bit different than the other songs that we have on this record. I dunno it just kind of makes sense we did this show with Propagandhi in Calgary a couple of months ago and we did one song live and that was that song. We practice it a lot and it just feels like the song that should be there. It kinds is a nice first glimpse of what the whole album will look like.

In this album, there are a few references to the balancing act of being in a punk band and actually having an adult life. Tell me about how that would affect future plans on touring?
In terms of touring there is only so much we can do, we kind of just stick to the 3 to 4 day weekends, that can get a little hectic it's tough to go to Europe for 4-5 days. Thatâ€™s kind of how it is. Weâ€™re really lucky to have supportive families, that we don't want to be away from but we still want to go out there and play shows, that is just kind of the balancing act that we're finding now. Weâ€™re over the moon about the fact that there are people that still want to see us and the fact there are festivals that still want to have us. We just want to try to work it out where it will not put too much stress on our home life because that's obviously our most important thing.

Any other tour plans for the band?
We got a bunch coming up for the new album. We are doing a week in Canada then a week later we will be playing Pouzza Fest in Montreal at the end of May. We will be going to Europe 3-4 weeks later, we got a show with Nofx and a few festivals in mostly Holland, Belgium, and France. There is more but that is all that I can think of right now.