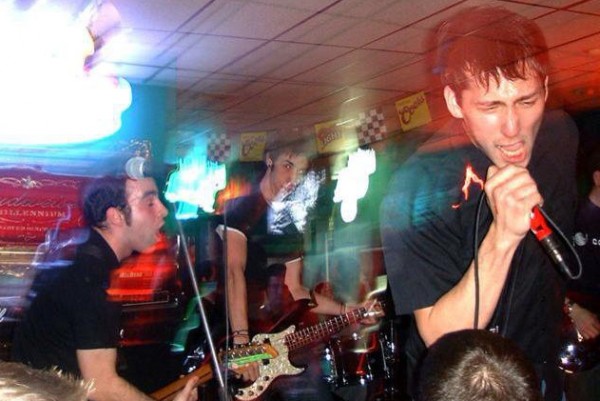 Although they never were as famous as some of their other early aughts punk peers, The Backup Plan are hallowed in their hometown of Long Island. After a decade in the scene, the band broke up a number of years ago. But now, they're getting back together for two shows in October for a benefit to support the family of Rob McAllister.

Staffer Michael Musilli shares his thoughts on the band's importance, the benefit show, and how he was personally affected by the group below.

2001. A tumultuous time for the New York area. New threats, new politics, new realities. All swirling in the murky waters surrounding New Yorkâ€™s boroughs and Long Island. Lurking just beneath the surface of those dark waters, though, were the seeds of a musical revival. And just as New York itself would rise from the chaos of the times, so too would its underground music scene. As bands broke up and others went mainstream, it fell to the areaâ€™s more unassuming and humble contingent to either sink under those murky and calamitous waters or to rise up from those foggy depths and crest a new wave to the shores of New York and beyond.

One such group of unassuming Long Islanders was very much prepared to ride that wave. In the brief vacuum created by changing cultural landscapes and musical torchbearers, rose The Backup Plan. There was certainly an innocuousness to their formation. BUP was actually the reworking of an even older band, Clump, that had a much different feel. As frontman Jeff Tui put it, â€œThe whole idea behind [Clump] was to write catchy songs with really dumb lyrics and get people to sing these ridiculous songs with us.â€ But things were happening around these guys. Life was changing, New York was changing, and they were changing. So Clump was put to bed in lieu of what Tui said was a desire to â€œtake things a little more seriously. We changed our name to The Backup Plan and attempted to shift the focus lyrically to more real subject matter.â€ And whether they admit it or not, itâ€™s difficult to ignore the correlation between the new reality swelling around them and their collective desire to be a more serious band.

Set against an ever-imposing backdrop of changing cultural priorities, the boys in BUP felt a great pull to create and explore. After all this was Long Island in the early millennium where disaster and tension had struck hard, and stayed. These were suburban punk kids who saw their world for what it was, a world forcing them to deal in difficult and ugly realities. This was a time for parting with illusions. Guitarist Dan Brenner didnâ€™t put it gently either: â€œI was 21 years old and had barely left New York at that point, so I was super excited to travel. I used to think I had no future at all so I may as well just work a bunch of shitty jobs and quit them when another tour came around… My personal life was complete shit and all I wanted to do was get in the van and never come home.â€ In retrospect, itâ€™s easy to find the naÃ¯ve romantic underpinnings of Brennerâ€™s sentiment. A bunch of young guys just wanted to get in the van and travel because they only had their shitty suburban lives to leave behind. But that ignores the unsettling time in which The Backup Plan flourished. That ignores their collective impulse to spread a message of compassion and thoughtfulness all the while entrenched in a time of great unrest and fear. That ignores what made The Backup Plan so important: their empathy, and their poise in offering hope and solidarity to whoever was willing to listen.

With the release of Dearest Whomever, the bandâ€™s only proper full-length, The Backup Plan toured as often as they could. The funny thing, though, was that no one in the band saw touring as a gateway to larger success necessarily. They all talked about touring through one lens: personal connection. For Jeff, personal connection was paramount. â€œ[One] thing that always stuck with me was a show we played in some park lodge in Rochester, NY. A kid came up to me at the merch table and told me that one of our songs, â€˜Things Dignanâ€™s Not Supposed to Touchâ€™ had gotten him through a really rough time. He just seemed so genuinely thankful. Take away every other cool thing we got to do and that moment was totally worth it.â€ That was The Backup Plan. Forget all the static and chaos around them. Just focus on the here and now. Make a turbulent world a little better for the people they cared about.

Over a decade later that is still The Backup Plan. Of course, the world is different for all of them now. After breaking up over six years ago, theyâ€™ve gone on to new bands, new jobs, and new families. Yet, while many of us moved on and forgot those tumultuous and troubling times that a decade ago brought us so close together, The Backup Plan did not. They still hold true to the empathy and love that made them so important to Long Island and beyond. So they will dust off their cabs and plug back in for a couple of shows because Rob McAllister, a close friend, bandmate and fellow Long Islander, passed away earlier this year. He left behind two young children and his longtime girlfriend, Marisa. Marisa herself was a huge supporter of The Backup Plan, and so BUP were compelled to act on another very personal connection. A connection fostered in the Long Island scene that showed them the same love and grace that The Backup Plan sought to bring to every town they played. They will play two shows on LI, and all proceeds from their reunion shows will go to Marisa and her children.

Sure, The Backup Plan wasnâ€™t the biggest or most celebrated band of their era. So they didnâ€™t play all the shiny polished package tours with all the hype bands of the early millennium. Nope, none of that. But thatâ€™s just fine with them because theirs was a far more instinctual motivation, and a far more earnest story. Like so many young and disenchanted punk kids, the members of BUP dreamt of leaving and searching and creating. But unlike so many, they acted on it. They did it and they did it well. When asked what he wanted people to remember most about The Backup Plan, bassist Andrew Jones said simply, â€œStart a band, print some shirts, record the best shitty demo you can and play anywhere and everywhere. But never forget your home.â€ And home is exactly where theyâ€™ll be this fall. The Backup Plan will once more push aside the static of a riotous world, they will focus on the people who made their band what it was and is, and they will make this world a little better for Marisa and Ramona and Robert McAllister, Jr.