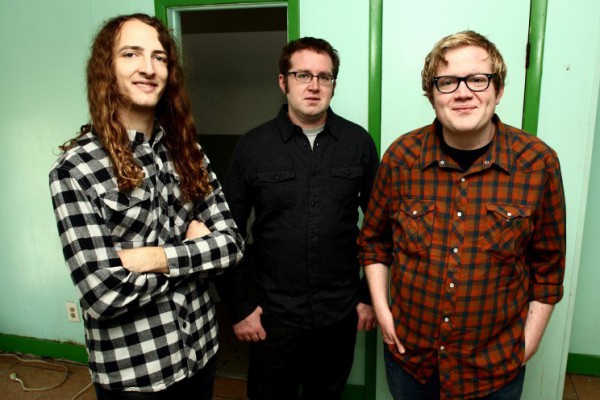 For the past decade, Lansing, MI's Cheap Girls have been pumping out catchy-as-hell rock built on a simple, but effective format. On September 16th, they'll be releasing their first compilation of selective rarities, God's Ex-Wife, on Asian Man Records. Interviewer Alex Meylink talked with vocalist and bassist Ian Graham about the process of putting this collection together and what it's like to look back at ten years of personal rock music.

I love the title- Godâ€™s Ex Wife. Do you want to elaborate on that choice?

Really early in the band, before we were doing much with it- and I think this is pretty common amongst bands- we thought of all this random, dumb shit that could be the title of something. Like, â€˜yeah, letâ€™s call it that! Letâ€™s call it that!â€™ Amongst a group of our friends who we were really close with, from around the beginning of our band, this was a working title. â€˜Oh- the next record will be thisâ€™, but it just never came to be. So we thought, with having older stuff, do we really need to get some cheesy, reminiscent title to call it? This was just a super easy bailout instead of something overly sensitive for a bunch of old songs. Not to dismiss the songs- just, some of them go back really early. We thought this would be the last chance to use this one, which was a popular one amongst our friends.

Rather than A Look Back or something.

Right. Nothing more than that. Iâ€™ll be the first to say: it doesnâ€™t make any sense (laughs). Just some words together. I donâ€™t really remember the origin, but it does have a way of tickling me and others, I guess. It works.

So why now? After something like 4 LPs and other stuff, why release a singles and b-sides collection? Was it now that you guys finally had enough or did the timing just feel right?

Well, there were plenty of songs; this doesnâ€™t really have everything. This has just the ones we really liked. Thereâ€™s still some 7-inch stuff, some covers that we didnâ€™t put on this because we wanted it to be sequenced as a record. Iâ€™ve always liked it when bands do this. It was getting to the point where were going to have to leave off too many songs or weâ€™d have to have this massive collection, which is just exhaustive for listeners. You know, I honestly donâ€™t think this will be the last thing that gathers what we have left over. Typically, when we record something we donâ€™t go into it thinking something wonâ€™t have a place. We go into it thinking everythingâ€™s gonna be equal, so there are plenty of older songs I feel just as good about, but they just never necessarily worked or they were on a 7-inch that had 300 copies like six years ago or something. Weâ€™re not gonna drag a bunch of different 7-inches on tour. Itâ€™s nice also with the streaming as well. Consider it a playlist we made for you of all our old singles. There are just many levels where it works. At the core of it, we wouldnâ€™t be doing it if I wasnâ€™t a fan of when bands do this. I think itâ€™s always kind of fun. It just felt like time.

These songs arenâ€™t tracked in chronological order; theyâ€™re kinda just all over the place, whatever it felt like should go next. What was the process like for organizing those and deciding what went where and what made the cut and didnâ€™t?

I donâ€™t think there was anything, as far as what isnâ€™t on itâ€¦.there were no arguments. I think everyone felt pretty equal about what was gonna be on there, what should be on there. But it wouldnâ€™t surprise me if a few weeks or months or years from now I suddenly realize there should have been one key thing on there. There is a lot of stuff. Iâ€™m talking in circles at this point. Iâ€™ll bring it all back home; donâ€™t worry (laughs). I think that we looked at them as if they were going to go in one place, the same way we looked at a batch of songs that would make a proper record that weâ€™d just recorded. To start the record with home demos and stuff like that and by the end of it get to elaborate studio recordingsâ€¦I donâ€™t know, I think it should be something you could put on and listen to, top to bottom and feel alright about it, as far as one song to the next, energy flow, the proper ebb and flow of a record.

I really like Modest Mouse- I canâ€™t remember the name of the record, but itâ€™s actually the record I got into that band on. I donâ€™t celebrate all of their stuff, but they had this collection of 7-inches and leftover songs, I think in like the early 2000s. Thatâ€™s the point I go back to, because that was a really special record to me. It was kinda hopscotchy with the tracklisting, like what song should come third and what song should take it out. You know, we really like to make records, so this is just the best way we could do this one.

One of the things on this record that really stood out to me was the full-band version of the originally acoustic track â€œCored to Emptyâ€. Thatâ€™s one of my favorite acoustic songs, but it becomes something totally different as a full band piece. Iâ€™m curious if that was a decision during the recording process- was it always intended to be acoustic or was it originally meant to be a full band song?

I wrote it as an acoustic song; they all start out that way. It felt very, very special and personal to me as an acoustic song. Itâ€™s a kinda vulnerable moment. I think that at the time I was back and forth with it. Itâ€™s just me and a guitar on this brash rock record. When I brought it to the band, we just bashed it out real quick, cause that always works. So we did that, demoed it for Giant Orange that way, but I think early on we knew weâ€™d have to make a decision of which one we were gonna use because we felt pretty comfortable with both of them. When we did the record, we knew the acoustic one would just be me and a guitar and itâ€™ll take not very long to record. Itâ€™s gonna be just this sit down, play it, get the right feel. So we figured weâ€™d do both.

We had some leftover songs from that record. Weâ€™ve got these songs, weâ€™re in there making records, and if they donâ€™t fit, then theyâ€™ll find a home later. When we were done, that acoustic version felt special. At the same time, I think the rock version is great. It sounds like a really good rock song for us. Itâ€™s the original, rawâ€¦just us getting through the song. Itâ€™s just having fun with a rock song. How many times do you think I said â€˜rockâ€™?

Both versions are pretty important to us but both have their place.

It reminds me of the acoustic version of the entire My Roaring Twenties record you guys released a while back. As you write on acoustic, these songs really do lend themselves well to acoustic versions. Do you guys ever plan on doing more in that format?

Itâ€™s hard to say. I wonder the same thing. I think itâ€™s safe to say we have acoustic versions of all the records and all the songs. Typically, Iâ€™ll do one and Adam might add to it. Weâ€™re playing it a little more where we set up in a friendâ€™s basement and spend two days playing the whole record acoustic. Weâ€™ve gotten very, very comfortable playing as an acoustic unit as well. Itâ€™s something I enjoy quite a bit, but as far as releasing a record that way? I would really like to, but it just kinda depends- when weâ€™re making the record- if it feels like the time to do it. I think itâ€™s highly likely that something more acoustic-based will come out.

Cool, thatâ€™s exciting. So Iâ€™m not sure how to phrase this question. Listening to your albums over the years, itâ€™s easy for me to feel a connection in the growth of content from record to record to my own growth. You know, the person I was listening to Find Me a Drink Home in my early twenties to the person I am now. In the press release stuff, you said that your albums are kind of like an immediate transportation to who you were at a time. Looking at those records- thereâ€™s some maturing going on there-

I definitely do see that and itâ€™s easy to connect to as a listener, over time. Looking back at the records and your writing process, have you been able to map your own personal growth in your writing or thinking? Or even how you go about writing or what you write about?

Yes and no. Itâ€™s funny, I first had that thought, you know, thinking about this collection. When I had to actually sit down and type out words I had written years ago for the lyrics for this releaseâ€¦that was a weird one. As far as how I feel about certain things, there are some big changes in there. Whatâ€™s really interesting is I didnâ€™t ever start writing songs as a songwriter until this band, starting when I was twenty- and Iâ€™m thirty now. It is interesting to have the entire period of my twenties as a documented thing. Itâ€™s ideal to not really wrap my head around that and completely enclose that as an idea, but itâ€™s definitely something Iâ€™m aware of. That there is a maturity there, which is obviously a good thing to me. I try not to dwell on that one, because I donâ€™t want to necessarily color future writing with feeling like I have to sit there and write a journal of where Iâ€™m at today. I think that comes out naturally on its own.

Iâ€™m sure you donâ€™t sit down and go â€œOkay, these are my songs about being 30 years old that I am writing now.â€ In hindsight itâ€™s easy to see some of those changes.

Right. Itâ€™s definitely there. Itâ€™s interesting for you to say that, cause last night, writing out the words was when I felt it most.

Tours: Dog Party and The Interrupters to open for Green Day