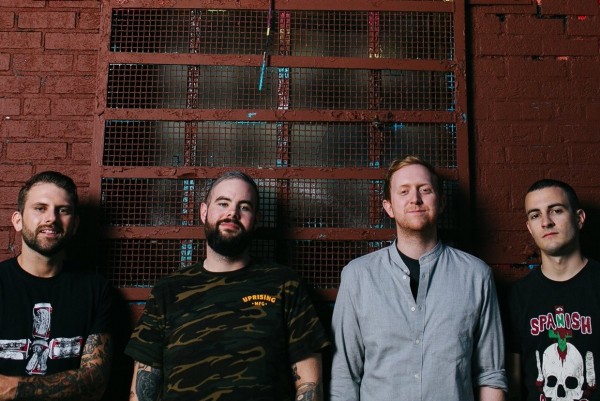 Brooklyn-based punk band Hot Knife. Hot Knife formed from members of Static Radio, Spanish Gamble, and Candy Hearts about a year ago. A fairly new band to the scene, they have a new flexi disk out this fall and we premiered their brand new song titled "Distant Son" here on Punknews earlier today. Editor Samantha Barrett spoke with guitarist/vocalist Luke Taylor to talk about the song and flexi discs. The flexi is available for pre-order now on Black Numbers. You can click here to pre-order the flexi.

How did you guys come to form this band?
This band was basically formed by Vic Castello, our bass player. I knew Vic from High School in New Jersey, we both played in bands who played together all the time. I have known him for years. He asked me if I wanted to be in a band, I definitely did, it's been a long time since I have been in a band. He also knew Ryan Weber, our guitar player, so he asked Ryan. Ryan knew Matt Ferraro and Ryan pulled Matt in. I guess that is how everything pulled together. It's been about a year or so now.

What are your influences?
We are definitely an eclectic group as far as what we all listen to. We listen to a lot of Nirvana, we all grew up playing and listening to punk rock. I think if I was to describe our sound I would say that we are melodic, pretty fast and pretty riffy with a little bit of surf elements to it. We like to play with reverb a little bit on the guitars. Yeah, I guess that is the style we have taken to. We are still a very young band and we are still evolving. But for now, I think that is our sound.

You guys have a new flexi disk coming out. Why did you decide on pressing a flexi for this release?
I think it was Dave from Black Numbers idea. Dave is kinda pulling the strings in making this all happen and I think flexi discs are awesome. I think flexi are just a cool way to distribute a couple of songs. We knew we wanted to do a small release. We recorded with Phil Douglass from Latterman and Iron Chic. We went with him, it was a really cool and laidback experience. We did not know what we would get out of it or what we would come out with. We came out with two songs that we were happy with.

Do you prefer flexi versus a cass-single format?
That's a good question. There is a degree of novelty to a flexi. This is our first release so we're not trying to breaking the bank and we are really grateful to Dave for making it happen. I think a single would probably be the next move and then probably an EP.

Tell me about the song â€œDistant Sonâ€?
â€œDistant Sonâ€ was a song that I came to the band with written. Itâ€™s very riffy, catchy, short and a little dark. It has a power pop chorus. The song is about a few different themes, about a father-son relationship, and loss of faith. Both the songs on the flexi are on the little darker side.

You guys will be playing Fest this year. Are there any plans on touring for you guys?
We're playing a couple of different dates in Brooklyn. We are playing tonight at Goldsounds in Brooklyn. We are playing there again in October which will be our vinyl release show on the 21st, playing Fest on Saturday night and then some shows in Boston in November and some shows in Philadelphia in November as well. We will be around.