Talking a year of firsts with Matt of Bong Mountain 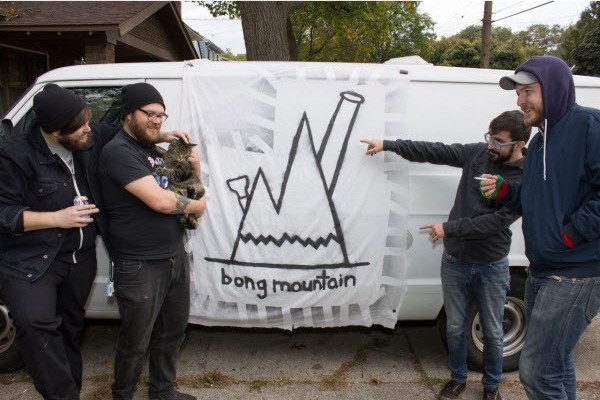 by Adam Eisenberg Interviews 6 years ago

2016 has been a year of firsts for Grand Rapids, MI's Bong Mountain. First time at Pouzza, first LP, and now, first time playing The Fest. Drummer and pinball aficionado Matt is going to be extra busy as he' pulling double duty with City Mouse as well as Bong Mountain. Multitasking is nothing new for Matt who also drums in the Grand Rapids hardcore band Shaaaaark. I caught up with him about a month before he was set to play The Fest and he was already noticeably excited. We talked about music, The Fest (duh) and even a little pinball.

How and when did Bong Mountain get together? Alex and I used to be in a band for a few years before Bong Mountain. When that project was done we still jammed together. Adam started playing with us after we saw him play in a Pinhead Gunpowder cover band. Shortly after that, Chris finally got out of bed, came downstairs and joined us- his other projects Cain Marko and Low Cloud had recently stopped playing. That was around July of 2014. We played our first show later that November with Typesetter and Astpa

What are your personal influences, and what about mutual band influences? I get hooked on bands for months at a time, right now it's Signals Midwest, Crybaby, Iron Chic, The Smith Street Band, Shit Present and Dead To Me. I would also say that burritos, vegan ice cream, and Tecate are pretty big influences in my life right now.
We all like the same genre of stuff but there's only a handful of bands that all four of us are super into, but we all can get down with some PUP, Iron Chic, Bike Tuff, Spraynard, Hot Water Music, North Lincoln. We definitely get down to the Comedy Bang Bang podcast though. In addition we collectively like Taki Rips, pizza, Hamm's.

Have you ever regretted e ba name?
I regret not being in a band called Bong Mountain sooner. It's so dumb but so are most things in life. Gotta learn to l e i e dumb shit.

2016 was a good year for Bong Mountain. Do you guys have big future plans for the band?
We'd like to have a brand new record out in the first half of 2017 followed by playing a bunch of shows wherever people will have us- hopefully the west coast and Europe. Basically, plase get us to Europe.

What's it like being a punk band in Grand Rapids in 2016?
Grand Rapids is a really great and weird spot. Pretty much there's a show or an event happening every night whether it's a goth show at an artspace or some awesome show at the Pyramid Scheme. It's great because there are countless places to play whether the venues are big or tiny basements. But also weird because a lot of these places seem to come and go. Good house venues are always hard to come by because as soon as they become established they usually go away. The life of a mid-sized city scene. Overall Grand Rapids has been amazing to us.

What's the connection between City Mouse and Grand Rapids? I know Taylor from The Lippies (R ) pl ed with them for a short time too.
I've known Nich and Miski from City Mouse for a bit- we've played with Nich's band the Plurals a few times and his label, GTG Records, put out a few tape splits for us. I booked a show for City Mouse and the Plurals in the summer and they crashed at my place. Miski had asked me to play drums for City Mouse before but I couldn't get the time off. With FEST coming up they asked me again to tour with them and it happened to work out. Bong Mountain is joining the first few days of the tour and I'll be do guitar back to Michigan with City Mouse.

Have you ever been to The Fest?
Yeah- I've gone every year since FEST 7 so it'll be my 9th year going and first year playing with a band. FEST has been a huge part of my life for almost a decade now so it means the world to me that I finally get to play! Although the music is the main draw, I love seeing all the people I only get to see once a year. Also there is some pretty awesome food, Reggae Shack here I come!

What bands are you most hoping to catch?
I usually don't make a schedule anymore as it changes so much but I'm hoping to catch Propagandhi, the Ergs, Latterman, Mustard Plug, Tens, Samiam, D4, Dead to Me, Iron Chic, Knapsack, Hard Girls, Signals Midwest, New Junk City, Typesetter, Jabber, Ghostlimb, Drug Church, The Smith Street Band, The comedy show at Rockey's is always amazing and The Max Levine Ensemble - they are the only band I've seen every year they've played since FEST 7, I think they skipped last year. I prefer to just hop around to whatever my frien are doing- I'd be happy if I even saw half of these bands.

Our boys in Bike Tuff our playing for the first time too so we'll all be shouting along with/at them.

Shifting gears, how did you get into competitive pinball?
My uncle has had a Creature of the Black Lagoon pinball machine since I was 5 or so. That machine has been my heart and soul connection to pinball. I even have a Creature stress face tattoo. But competitively speaking, I stumbled into the Pyramid Scheme one night about 2 years ago and they asked me to join a league- I was always into playing it for fun but after I realized I was pretty okay at it I decided to do it competitively. It's kind of like playing shows in a way because you get to travel all over and meet new people. I've been to Pennsylvania, Indiana, and all over Michigan for pinball events. I've made a bit of money off of it here and there but nothing substantial. I like the competition aspect of it, but I really like traveling with my buds to different places and doing coo t ngs. also try to route Bong Mountain tours around where there is pinball.

Have you scoped out the cool pinball places on the way to Gainesville?
I have not but City Mouse are getting more into it now so that's my responsibility. Better get on it.
A couple of multiple choice quick hitters. Sex Pistols or The Clash?
I have a London Calling tattoo. The Clash is greater than everything.

Bell's or Founders?
Bell's. Although my favorite song titles from a Wormburner song is "Pints of Founders Make Me Drunk."

Thanks for your time. I hope you have a great experience at The Fest. I'm looking forward to hearing SHAAAAARK when you get back. Check out Bong Mountain (and City Mouse) at FEST 15 and be sure to pick up Bong Mountain's excellent new LP You're Doin' Great! (for the record), out now on Stonewalled Records.