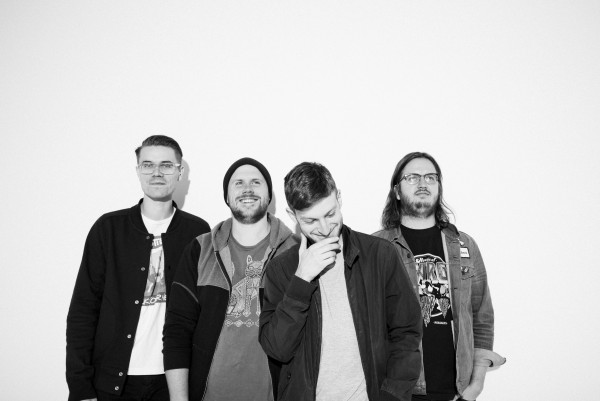 Toronto punk quartet PUP is touring strong after the release of their sophomore album, The Dream Is Over, this past May. Interviewer Jason Crider spoke with drummer Zack Mykula about the new album, playing drums, and the days leading up to The Fest in Gainesville, FL.

Your new record is getting a lot of attention and critical acclaim. Howâ€™s that feel?
Itâ€™s cool. You know, we expect more from ourselves than I think anyone else can expect from us, soâ€¦ Itâ€™s obviously cool, weâ€™re obviously grateful for the acclaim, but itâ€™s like, I mean weâ€™ve always just kind of been doing it for ourselves. We are very grateful, and itâ€™s nice to hear that people connect with it. And itâ€™s cool because of the word of mouth that that creates, itâ€™s cool to travel around and have people at our shows that also connect with it, and to cast a wider net, sort of. And yeah, itâ€™s been fun. Itâ€™s been a lot of hard work but a lot of fun.

How did you guys choose that great cover?
It kind of is and isnâ€™t [a non-sequiter]. The photographer, Chris McKenny is just this awesome, kind of impressionist photographer, and it just caught our eye. Iâ€™ve heard people draw the comparison where we live, as a band, we live in kind of a world of chaos, and weâ€™re just kind of flippantly or nonchalantly living in that world, which I guess is kind of represented by that guy with the newspaper. Thatâ€™s an interesting comparison or interpretation. But itâ€™s mostly just like kind of a really cool imageâ€”the division between chaos and order, without getting too philosophical, and how it relates to our lives.

So you guys get called a punk band, sometimes a pop punk or even hardcore punk band. How do you feel about those labels?
[laughs] Iâ€™m fine with any of those. Itâ€™s whatever people want to call us. Theyâ€™re not our labels. I donâ€™t think we call ourselves much of anything. But we just happen to fit in that world, I guess. And I can understand it, because we have that aggression and speed, but are also speaking to more emotional stuff. It makes sense to me. But otherwise, yeah, Iâ€™m okay with it. Itâ€™s not offensive, or anything. Weâ€™re obviously not a political band.

Whatâ€™s it mean to you to be a punk band in 2016? Is it possible?
I think it is possible and itâ€™s necessary, but I donâ€™t think that itâ€™s in a form that most people would recognize. A lot of punk purists would not necessarily recognize punk music when it comes out, I think. As punk listeners, you come to expect a certain aesthetic and a certain message, and sometimes thatâ€™s not that clear and not neatly packaged in the way that a lot of punk listeners have come to expect.

Yeah, I think it is possible to make punk music in 2016. I think youâ€™re looking to artists with a message. I mean, itâ€™s a pretty broad definition and it kind of destroys and defies the idea of genre classification, but I think punk music is anything that subverts and established order, and you can see that in all forms of music now. It could be that people have been doing punk music all along that you wouldnâ€™t necessarily recognize as punk because itâ€™s not the typical fast aggressive music, but it still questions the established order. So like artists like Solange or artists like The Dillinger Escape Plan or artists like Angel Olsen, orâ€”you know, whoeverâ€”I would consider all of them punk, where most people would not. So, in that way, I think it is possible.

Who is your favorite character on Stranger Things, and why is it Mike Wheeler (Finn Wolfhardâ€™s character)?
â€œ(laughs) Well, I think my bias would be clear towards Mike Wheeler, but theyâ€™re all awesome. Itâ€™s such a good cast, everyoneâ€™s great, and Iâ€™m excited to see what they do in the future.

You worked with him before Stranger Things, yeah?
Yeah, it was for our â€œGuilt Tripâ€ music video. He auditioned for the part of Stefan because it was us as kids in the video. With short hair, he just looks so much like Stefan did as a kid, and it was just perfect.

Maybe Stefan can be on Stranger Things if they have an episode where Mike is older. Yeah, (laughs) that would be a great crossover.

There are a lot of unconventional time signatures on this record, and a lot of moments where it seems like the drums are calling all of the shots. Whatâ€™s your approach to writing and playing drums in PUP?
The approach changes every time. I try to stay on my feet a lot. I donâ€™t have a set approach. Iâ€™d say that as much as the drums kind of drive it at times, you know, Stefan has such a unique, rhythmic voice, and that definitely helps me create scopes on more interesting, but not overbearing moments like I hope to be tasteful. I could talk forever about writing drum parts, but it mainly comes down to writing something that serves the song but is also novel without swallowing the content of the music. So it makes people listen and maybe puts a new perspective on something that may be old hat or conventional.

Who are your major influences?
Yeah, I definitely have a few. My favorite drummers are Jon Theodore from Mars Volta and now Queens of the Stone Age, and Billy Rimer from Dillinger Escape Plan, and Brooks Wackerman, formerly from Bad Religion. Who elseâ€¦ I mean those are the big three for me right now. Theyâ€™re all like superâ€¦ they all kind of broke out of the milieu in terms of writing aggressive, interesting music without basically, like, jerking off for the entire song.

Did you have anything specific that you wanted to accomplish on this new record, in terms of drumming?
Yeah, I mean, drum-wise Iâ€™m always looking to make rhythmic hooks, basically, and I think I accomplished that in one way or another on some of the songs. I want it to sound good, and also be interesting, but not be the focal point. I donâ€™t know if I accomplished this, but I think that a good drummer isâ€¦You donâ€™t notice when a good drummer does something. So itâ€™s not at the front of the composition, but after a while maybe you go â€˜oh thatâ€™s cool,â€™ and I think thatâ€™s what a good drummer does. So I try to do that.

I know Stefan damaged his vocal chords pretty severely a while back. How is his voice doing now?
I mean, heâ€™s good. Heâ€™s better than he was, obviously. Heâ€™s done a lot of work to bring back the health of his vocal chords, and heâ€™s really worked on rehabilitating, and heâ€™s strengthening, and he does a lot of stuff to care for them. Obviously like drinking more water, getting more rest, kind of easing back on the partying a little, and just in general trying to be healthy. That comes physically and mentally, like stress has a giant effect on your vocal chords and how they function. Itâ€™s just like managing all that stuff and getting better. Heâ€™s doing way better than he was, which is great.

We love Fest. Itâ€™s a great way to see friends and stuff. Everyone gets together in the same place. I donâ€™t think we have anything specific planned. I think we just want to play a fun show. We have an awesome stage that night, I would argue one of the best ones around that night.

What should we be expecting at Fest?
Itâ€™ll be a lot of fun. I would say try to come early and stay late, to try and see all the bands. That day, in particular, is awesome, but I mean every year there are just so many awesome bands. Everyone should just try and see as much as they can.

You guys are touring the world, getting more famous by the day, and both of your records have been met with critical acclaim. It sounds very much like the Dream Is not Over, but maybe Iâ€™m wrong. So hereâ€™s a two-parter: A) What is the dream? And B) Is it over?
You know, that title is obviously more tongue-in-cheek. Itâ€™s more about usâ€¦ the dream is over because youâ€™ve adjusted your expectations. Itâ€™s not as catastrophic as it is necessarily believed to be. I mean, the dream is over, but weâ€™ve just changed our focus, and weâ€™ve been charging ahead, toward that, with all deliberate effort, as we always do. I think thatâ€™s the main focus.