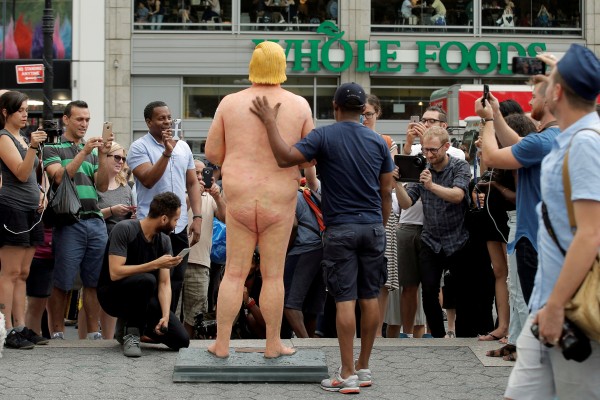 Well, the US election is right around the corner and it seems like no one is happy. It's rare for an election to have two candidates who are fairly despised by their own party. To that end, Punk rockers have been getting some good material out of taking some shots at Trump… I mean, he's an easy target.

But, this has caused staffer Mike Musilli to take pause. In his piece, he questions if simply attacking Trump, and thereby accepting Clinton as the preferred choice, is enough. In his piece, Musilli questions both the binary political process and also wonders if most punk are attacking Trump because his policies are vile, or if it's simply because "punx hate the right, duh." If it's the former, then, Musilli suggests attacking Trump isn't enough and that Clinton, and most democrats should take their share of ire, too. If it's that, Musilli suggests, then punk is as intellectual as it pretends to be. Read his thoughts below.

The Politics of Punk

Itâ€™s generally accepted that punk and hardcore is a movement as well as a musical genre. But if our underground is indeed a movement, what are our ethical and political values? By and large, we are undeniably driven towards social reform and equality. Makes sense given our collective ambivalence to, if not outright distaste for, the mainstream status quo. But we have to wonder why it is that our collective underground rallies so strongly against conservative leaders in America. What is it about those past and potential presidents â€“ Reagan, Bush, and Trump â€“ that we find so repugnant? Because, truth be told, those on the left have largely gone unscathed despite some rather uncouth decisions in policy and action.

To be sure, much of what these conservative leaders have done and said begs to be criticized by both punk and mainstream music at large. Even their collective personality type seems offensive to us. The seemingly disarming Leave It to Beaver-cowboy-jock popular archetype that most of us hated in high school is just the persona that the Reagans and Bushs of the world radiate to the public. I mean, sure Clinton played the sax and embraced Mtv. Yes, Obama has legitimate taste in hip-hop and did Marc Maronâ€™s podcast during his second term. But the former was impeached and the latter has fallen empirically short on many promises to the public.

So then what if our anger doesnâ€™t go all that far beyond the collective conservative fratboy persona that we find so easy to hate? Is there credence in the idea that we hate the Reagans and Bushes and Cheneys of the world because theyâ€™re the endgame of American cultural and political parody? Or is ours a truly ideological divide?

Given our movementâ€™s short history, itâ€™s pretty fair to say that Reagan was the first president with enough time in office to truly garner widespread and lasting ire from the punk hardcore underground. After all, it was Rock Against Reagan long before it was Rock Against Bush. Jello Biafra and the DK boys made their political name by speaking out against Reagan. Thatâ€™s not to discount the hometown boys in Washington, D.C. either. Government Issueâ€™s â€œHey, Ronnieâ€ is an all-time classic. Minor Threat may not have named Reagan explicitly but his policy and social influence certainly gave rise to their sense of social marginalization.

In typical Big Apple fashion, New York was arguably even more scathing in their indictment of the otherwise beloved 1980s president. Agnostic Front penned songs like â€œDiscriminate Meâ€ and â€œPowerâ€ in clear response to the influence of Reaganâ€™s policies. And then there was Reagan Youth themselves. The bandâ€™s name was a darkly humorous nod to the Hitler Youth, and left no denial of the anti-Reagan sentiments spewing from the New York hardcore punk scene.

Bush, Sr.â€™s great punk defiling came at the hands of Fugazi, who headlined a protest again the first Gulf War at the White House. Now letâ€™s give credit, those dudes literally played in front of the White House in protest. Thatâ€™s punk as fuck. And evidence of the great emphasis punk music places on politics. Clinton himself hardly suffered at the hands of any punk band. A nod must be given to Outkastâ€™s â€œBombs Over Baghdadâ€ and Descendents â€œCaughtâ€ here, but thatâ€™s about all Bill had to endure by any anti-establishment musicians.

So sure there was a little noise in the eras of Bush, Sr. and Clinton. But those twelve years were far less charged than those of Reagan before and certainly than those of GW Bush afterward. So why such quiet in those years? Was it truly a decade of ideological paralleling between the American political machine and the punk underground?

Fast-forward to early-millennium America. An era marked by 9-11 and the new world terrorism wreaking havoc on the American psyche. George W. Bush was thrust into a position of great tumult and calamity. His decisions on Afghanistan and Iraq were ill-advised and short-sighted. His deference to shadowy men like Vice President Cheney or Sec. Rumsfeld certainly did him no favors as a leader. The collective puppeteering of Colin Powell and Condoleeza Rice may well have ushered in the now commonplace act of boldly lying to the American public.

The Fat Mike-led Rock Against Bush tours and compilations soon followed. Bostonâ€™s The Suicide File made a living off the Bush administration, all of their releases steeped in critical rhetoric against GW and his cronies. Green Day mounted one of the biggest comebacks of the decade on the shoulders of their anti-Bush American Idiot album. So it seemed that all corners of the punk underground were united against Bush, Part II. And that was for good reason. He lacked leadership, eloquence, intellect, and vision. His two terms will forever be remembered for political cronyism and military opportunism. But my question is whether the rocking against Bush was a reaction to policy, which is certainly defensible, or a reaction to a cult of personality.

Did our underground rally the troops against Bush and Reagan because of their conservative policies or did we vilify them because they are symbolic of the mainstream smooth-talking uber-privileged personalities that make us squirm in our Chuck Taylors?

Why wasnâ€™t there a more forceful backlash during Clintonâ€™s bumbling of Haiti? His half-hearted intervention in Africa led to the longest sustained gunfight since Vietnam, at least at the time. This is also a president who lobbied heavily for uniforms in public schools and objectified women like it was presidential mandate.

And what do we say of Obamaâ€™s disastrous handling of Guantanamo Bay or his consistent support of public surveillance? Certainly his policies on surveillance and privacy concerns should rustle up a song or two, no?

As for the here and now, Hillaryâ€™s consistent collusion with Wall Street, her record of issue-flopping, and subversion of Bernie Sandersâ€™s campaign offer enough political fodder to write an entire full-length of scathing anti-establishment punk.

Now Iâ€™m not saying these politicians get total passes. John Joseph of the Cro-Mags writes off all mainstream politicians regularly via his social media outlets. So too does This is Hardcore Fest founder Joe Mackay. Ron from Deathcycle shames us for believing in the two-party system on his Facebook page. But thatâ€™s not the norm. At all.

This yearâ€™s presidential election has done us no favors in clarifying these questions. Trump is a perfect example of cult of personality snowballing to cosmic proportions, despite his utter inexperience at any political level. Hillaryâ€™s â€œfamily dynastyâ€ path to the Democratic nomination was littered with nefarious scandals on a variety of fronts.

And yet, youâ€™ll be hard pressed to find shirts printed with an image of Clinton blowing her brains out. But head over to Municipal Wasteâ€™s merch store to pick that shirt up with an image of Trump doing just that. Last October, Anti-Flag released a limited edition anti-Trump shirt to remind people of what scares them. Earnest politics? Clever marketing? Probably both.

Itâ€™s seems a day doesnâ€™t go by without Kevin Seconds posting pro-Hillary and anti-Trump rhetoric on his social media. An old friend and longtime Bostonian even joked on his Facebook page that if Trump were elected, The Suicide File would have to come out of retirement to write a new record.

Now the Donald has certainly given America its fair share of incendiary rhetoric to work with. He is a buffoon and a megalomaniac. And the punks have come out in full force against the Republican nominee.

Thereâ€™s been little criticism about Hillaryâ€™s scandals in our underground though. And so I wonder. Are we hating on a cult of personality that we innately despise? Or are we honestly aligning ourselves with the political mirrors of our musical ideology? Are the democrats that much closer to punkâ€™s political ethos?

The answer is one of resounding uncertainty. Now democrats absolutely love to posture as though they align themselves with the fundamental concerns of punk rock as a political movement. Rhetorically, theirs is a focus on social equity, educational improvement, and corporate and welfare reform. And punk has always been about that, at least for me. The beauty of our music is that it pushes us to reconsider inequality, it forces us to be more educated, it instills a healthy distrust of corporate greed, and it asks us to always consider those less fortunate.

So it may well be that we hate the right for all the right reasons: their penchant for military chest-thumping, their antiquated adherence to restricting womenâ€™s rights, their not-so-veiled desire to keep racial minorities under lock and key. The list goes on.

Yet if there is one thing we may do well to learn from our current election in particular itâ€™s that we mustnâ€™t let the glaring ignorance of a typically distasteful candidate overshadow the establishmentarianism of another. We are an underground, and with that label comes the implication of being anti-establishment. And maybe one of our greatest responsibilities as an underground is to always be vigilant against institutional politicians of all parties. Itâ€™s easy to spot the wolf when he bares himself openly. Itâ€™s harder to spot one when he (or she) acts the lamb.

And if we as an underground constantly find ourselves scratching our heads at a narrative of vitriol towards the poor and helpless, or if we find ourselves defending equality to those whoâ€™ve never felt the pangs of marginalization, then we must also find ourselves screaming against our world leaders who ignore those problems no matter the party affiliation.

Is the answer a third-party vote? Is it abstaining from the process altogether? Iâ€™m not sure. But I do know weâ€™ve always been the best at political music. Better than any other genre. So maybe the answer is in getting back to what got us here. Maybe the answer is getting back to fighting the establishment as a whole. After all, we may always be, as Ian so aptly taught us, â€œjust a minor threat,â€ but thatâ€™s no reason to stop rocking against those we disagree with, Republican or otherwise.

Editors' Picks: 16 Punk Veterans Still Kicking Out the Jams in '16