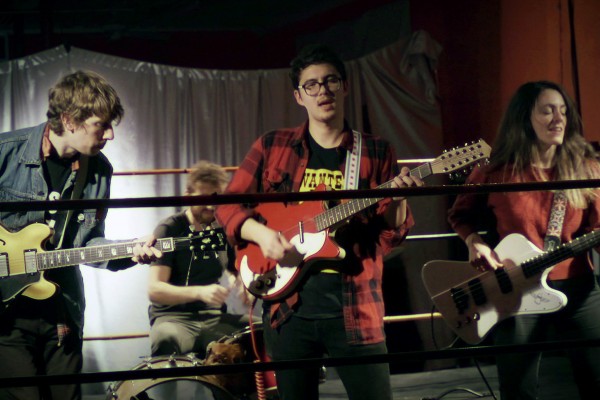 Today, Punknews is excited to debut the new video by Twiga!

Do you like indie rock? Do you like pro-wrestling? If you answered yes to either of those questions, you will like this video. If you answered yes to both questions you will love this video. In "Million $$$ Dream," Twiga kick out indie-pop that is as icy sounding as it is huge. The Pixies would be proud. Meanwhile, in the video, pro-wrestlers just completely beat the shit out of each other before the spectators decide to get in on the bloodshed.

Speaking to Punknews about the video, director Jess Lane said, "As a huge wrestling fan, directing a video for a jangle pop song about the Million Dollar Man was a total dream. I wanted the video to be just as playful and emotional as the song they’d written: capturing the dilemmas wrestlers grapple with in and out of the ring. I was worried we couldn’t do Ted DiBiase and Virgil’s story justice at this scale, so I used those legends as inspiration for a ridiculous indie match gone off the rails. Recruiting local pro wrestlers and Brooklyn comedians, we wrangled together enough bodies to orchestrate a schmozz, and got the band in on the action too."

You can order the band's new tape right here. Then, check out the video below!

Videos: The Menzingers: "After The Party"