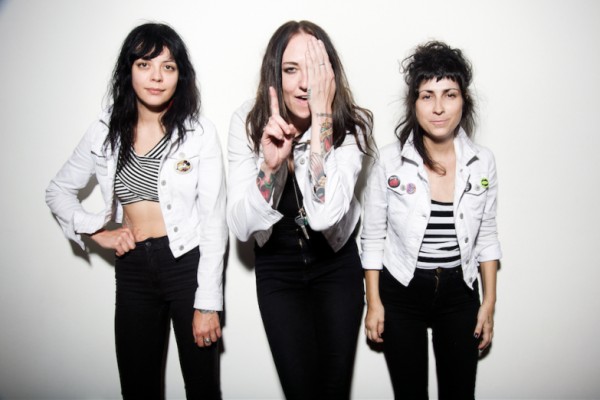 Don’t mess with the Coathangers. They will jack you up. 2017 marks the trio’s tenth year of busting out completely kicking, totally catchy, often hilarious garage-punk. And one thing that has held constant for the group is that throughout the past decade, the group has had each other's backs, resulting in a band that rolls as a unified, hard rumbling unit.

Their last album, Nosebleed Weekend found them focusing more than ever before on melody and song craft, resulting in a killer release that balanced a punk smash against girl-group ear candy. But now, the women in the Coathangers are pissed off. Parasite, their upcoming EP, was inspired by assholes at the global and the personal level. To get the scoop on the fuel for Parasite, Punknews’ John Gentile spoke guitarist Julia Kugel.

Julia Kugel of the Coathangers on Parasite, Trump, and Sisterhood

John Gentile Straight up, the Coathangers are a gang. There’s any number of interviews out there where some wisenheimer interviewer will ask one of the three members some asinine or rude question. As soon as that ill-informed question leaves the lips of the asker - *SNAP* the other two Coathangers leap to the defense of their comrade and before you know it, the interviewer is getting a triple beat-down.

These are some tough gals. Case in point, Yours Truly asked guitarist/singer Julia Kugel, “What do you think of this guy Donald Trump?” Her response: “What do you think I think of him [you jackass]?” The “you jackass” portion isn’t spoken but it seems to be implied. (More on the Trump thing later). The Coathangers don’t take any shit, people.

“Dude, we are a gang of sisters,” Kugel says. “It’s beyond sisterly. We’ve been business partners. We’ve been writing mates. We’ve been friends. We probably have spent more time with each other than any other person in life. It goes beyond a band. We are protective of each other. If you’re against one of us, you’re against all of us. We are the only three people that have been through this thing over the past ten years. You can’t buy that. You can’t make that. How would you describe your relationship with your mom. You can’t, really.”

Indeed, 2017 is the decade milestone for the trio- Kugel on guitar, Meredith Franco on bass, and Stephanie Luke on drums, though sometimes they switch it up when playing live. They started the band in 2007 coming back from a Women’s march, more as a lark than anything else. “We started this band not to be a band, but to hang out and be friends with each other,” Kugel says. “It’s not the same experience as other bands and that’s why we have the connection that we have.”

Much in the vein of the great bands like the Slits, the Ramones, and Crass, the women started the group without really “knowing” how to play their instruments. Of course, just like the greats, this resulted in some absolutely fantastic, impeccably unique garage punk. Their earliest releases bended serrated humor around a caustic disposition. “Toomerhead” was a lo-fi smasher that wallowed in a vicious despair. “Arthritis sux” was 111 seconds of primal punk destruction. “Shut the Fuck Up” is self-explanatory.

And, like all the great punk bands, before they knew it, they were a real band. In a way, their trip from caper to heavy-duty-touring-band culminated with 2016’s Nosebleed Weekend. On that release, which featured the women flipping from punk to hardcore to girl-group to bubblegum found the band focusing more than ever on melody, harmony, and composition. Their harsh, blunt strike had been replaced by a targeted, skillful, piercing. Check out the amazing Nirvana-meets-Supremes video of “Down, Down.”

But, quite interestingly, while Nosebleed Weekend found the trio focusing on melody, with their anger perhaps removed from the forefront, the press materials for their new, upcomming EP Parasite stated that Kugel “just wanted to scream and curse.” It seems that the group might be reaching back to their earliest days of rage.

“Everything we do comes from a natural place,” Kugel tells me. “Pissed off and frustrated was how we were feeling. There seems to be a different feeling now. A different vibe. There were personal issues- a very specific personal thing- but also the election and everything that came with it.”

We live in a time when the President is a sentient Cheeto hell-bent on closing borders and blocking out refugees in order to… well, he doesn’t exactly seem sure why he’s closing borders or enacting other regulations.

This strikes close to home for Kugel because she, herself, is a refugee. In 1990, her two parents took their kids and fled from Belarus. Kugel says, “the thing about the former Soviet Union is that it never seemed openly violent. It was subversively violent. There was no freedom of speech or press there.”

“We were taken in by the United States as political refugees,” she continues. “I didn’t know English or anything. There was such a diversity of culture in America that we didn’t have in Belarus- other races, other languages. Trump is disheartening. I love America and everything that’s done for me and my family. The freedoms afforded to us have been more vast than other countries. I’ve seen some of the worst, so to me, I love this country and it’s a shame we have this problem. It kind of allows people with prejudices to come out of the woodwork and feel strengthened. This is not what my vision of America would be. It is disappointing.. but it’s also motivating.”

And so, on Parsite, the Coathangers are throwing the coal back in the burner and coming out swinging. The lead single, “Captain’s Dead” has the face-slash “You’re out on a treasure hunt/ acting like a little cunt/ guppie better hold your breath!” Ouch.

Kugel says, “Parasite is about parasitic people and relationships. It’s about people that take and don’t give anything back. I’s just a toxin. Also, it’s literally about having parasites and how crazy and angry they can make you feel.”

“Anger is something you have to really feel, really feel, for it to go away,” Kugel continues. “If you suppress it, that’s when you explode and start breaking shit. That’s the cathartic part about music. I am in a better place, and that’s the beautiful part. Playing live lets you re-live it and it’s like a constant therapy. For all of us, it’s that way and it’s why we have the connection that we have- this connection that we will have forever and ever, even when we aren’t playing music… though…” Kugel pauses before concluding, “sometimes it does feel good to just break stuff.”

Parasite is out June 30 via Suicide Squeeze