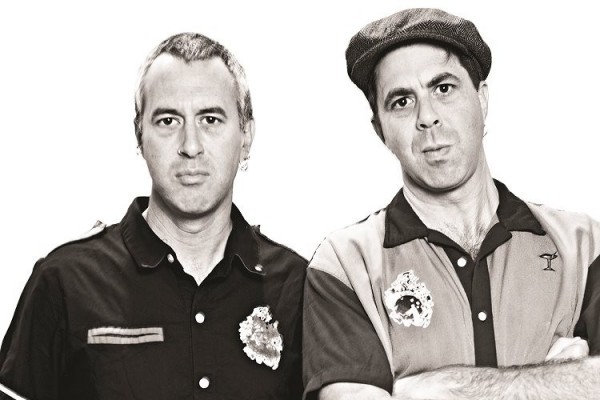 Mark Stern- the man knows how to throw a party. As a member of Youth Brigade, Stern started throwing shows in the early '80s as a way to enable punk bands to actually play live. Shows grew from small house parties to an unlicensed venue until things escalated with a full on riot at the Palladium.

Due to the ruckus, the Stern brothers laid off promoting shows for a while until resurrecting the art of the gig with Punk Rock Bowling (We're sponsors!) This year, the main man himself Iggy Pop is playing, along with OFF!, Choking Victim, The Dwarves, NoFX. Charles Bradley, and a lot more. So, Punknews' John Gentile spoke to Stern about shows in the early 80s, what new bands he thinks are cool, and what Iggy thinks of the term "punk."

Iggy Pop is playing punk rock bowling! What does that signify for you?

I’ve been trying to get Iggy to come out for seven years. The timing didn’t work out, or he was working on a movie. I talked to him about it six or seven years ago and he was into the idea. We’re not a huge festival, but we’re a dedicated festival. We try to keep it small- we sell it out at 7,000 people a day, so it’s a relatively intimate show. I think he “got it.” I saw him this summer and he was so great. We’re also going to do a screening of Gimme Danger which will be cool.

In the ‘70s growing up, I was influenced by a lot of blues-influenced stuff like Hendrix or Robin Trower- something that wasn’t mainstream. That’s how I got into punk rock. It wasn’t mainstream. At the time, there we probably 100 punks in Hollywood. They all had ten years on me and Iggy was a staple in their world and I got into him that way. People were spinning the Weirdos, the Bags, and the Stooges. I think that’s when he got widely accepted- when the punk scene started. I know he doesn’t want to be seen as a punk or anything, but I think that’s where the real acceptance began.

I’m glad you brought that up. Iggy has always been very cautious around the word “punk.” He definitely doesn’t call himself punk and doesn’t rush to the proposition that the stooges ”Created punk” or were proto-punk.

I think he wants to be received in his own way with no rules. To me, that’s punk. In the early scene, there wasn’t any punk band that sounded like the other. You had the Screamers, which was a drum, two synthesizes and a singer. The Go-Go’s were a punk band. There was a whole different song- there was electronic music, there was melodic stuff, there was harsh stuff. It was all about being yourself. Honestly, that’s what I see Iggy Pop as always having been. He’s gone through musical style and he’s an innovator. I think he doesn’t want to get boxed in by anything. To me, that’s punk- going outside the boundaries and doing what no one else is doing.

If you look at the raw sound, the stage presence no one was doing that at the time of the Stooges. I know there was the MC5 and an underground, but Iggy was always doing his own thing outside of that.

Along the lines of coloring outside the lines, I think a lot of punk rockers were taken aback to see Charles Bradley on the Asbury Park lineup. But, maybe, when you think about it, there is a core connection between these types of music.

I agree, it just goes back to what I am saying. I don’t want to go to a show and see the same nine bands doing the same thing. I want to get turned on to some new things. I was down in Dallas a few years ago and I went into a club at 3 o’clock in the afternoon. We walked in and it was packed. Charles Bradley started playing and my girlfriend- we had just started dating at the time- she said “do you want to stay?” and I said “Are you fucking kidding me?” I couldn’t move. This guy just hypnotized me. He is one of the performers that gives it all from the bottom of his soul, every show. He doesn’t go through the motions- he can’t. The way he performs he just gives everything from the bottom of his soul.

Speaking of variety, I think the Dwarves/Conflict club show is particular inspired. Those bands are both loud, aggressive bands, but they come from a very different conceptual standpoint.

I get it. It’s not like they have similar political views… or at all. I thought basically it was a high energy type show that fit together. Are they preaching the same thing- not at all. Hell no! As a playlist, musically, I think it works together. Sometimes, you don’t want to take a band and then throw three of the exact same type of band on the show. That takes away from the main band. I really do like variety and different styles.

Crazy and the Brains and Posers are playing. They are two of my favorite newer bands. I’m just curious about your background with those bands.

Crazy and the Brains- I’m good friends with Bouncing Souls. Pete was in the studio and he was like “you should check out this band.” He sent me a link to a rough mix and it was fucking awesome. They are just an innovative sound doing their own thing.

Posers, my friend is their agent, Ron from Final Conflict, and he was like “you gotta check them out.” They have that whole ’77 sound, but in their own way.

I’m sure that with these festivals, there is a significant amount of capital that you have to put up beforehand. Do you have to balance what will sell – that is what the masses want to see- with the bands that you personally think are worthwhile?

Vegas, we’ve been doing it for a while. We take a lot and start from scratch. It’s all our friends, punks, people that work and tour with us- we don’t take a lot of outsiders in. We run everything. Really, it’s a party for our scene, which is how it started in Vegas. We try to continue that way.

Asbury is a little different. It’s not our venue, so it’s a little bit of a challenge. The reason we did Asbury is because a lot of people can’t get to Vegas- it ain’t cheap to get there. Asbury is centrally located so people can drive to the show and go home. We’re going to do more stuff there this year- a pool party, and art exhibit. We’re trying to add ska and soul shows.

We’re a small festival. We don’t really have corporate sponsors. It is a risk. We really do appreciate people coming out. We struggle to not raise the ticket price- it’s directly based on our cost.

How did you get started organizing shows?

We had a club in ’81 called Godzillas that was run by me and my brother and all of our friends. It was all punk running it. It was five bucks to get it. Everything was a dollar inside- a dollar for a beer, for a burger, or fries. It was six dollars if the band was overseas. We had the Damned there, TSOL. I was twenty.

Then, when the cops came in and shut it down because we didn’t have the permits, we took the money from the last show and rented out the Hollywood Palladium. We called it “Youth Movement ’82.” It had TSOL, Social Distortion, Wasted Youth – we were 20 and it just got out of control.

We had to hire off duty cops plus we brought all our friends in as security. This was ’82, so we were telling the cops “there’s gonna be people with Mohawks,” which was weird at the time. People were cool. We were telling the main guy, who worked for the chief of police, about things he might want to check for- knives and things like that- and he was like “don’t tell me how to do my job!” So, we said, “well… ok.”

By the time we were going on, the cops freaked out, they were guarding the upstairs balcony that wasn’t open and the exits that were locked. They left their post because people were freaking out- they shut the doors because they were freaking out and so people busted them open. They smashed the box office and people were grabbing tickets. People started storming in. People raided the bars and were walking around with full bottles.

Then, riots started happening over and over. At one point, we counted seven helicopters. It was like a warzone. Gary was doing Goldenvoice at that time, so we said, “eehhhh… you do the shows, we’ll run the record label.” [BYO] And so that;s what we did for 35 years. We ran a label and stopped doing shows. And now, we’re not doing a label and we are doing shows. It all comes full circle.

We want YOU to be on Punknews Podcast #350

Videos: Red City Radio's "Joy Comes with the Morning" at Live! from The Rock Room