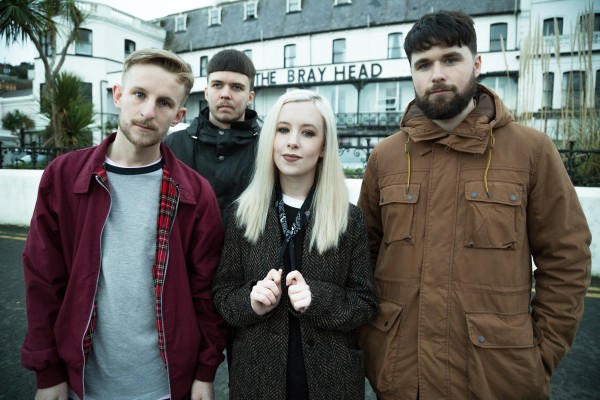 by Samantha Barrett 6131 Interviews 5 years ago

Irish quartet The Winter Passing have been paving their way into the scene with their unique blend of indie, punk and emo influences. The band recently released a new album on 6131 Records called Double Exposure. The record is a perfect example of a collaborative piece of the personal narratives of the brother and sister songwriting duo, Rob and Kate Flynn, on the struggles of mental and physical instability. Editor Samantha Barrett spoke with Rob and Kate Flynn about the new album and the punk scene in Ireland.

Tell me how your band formed?
Rob Flynn: We grew up in a small town in Ireland. Jamie our guitarist and I formed Winter Passing in 2013. We have been writing some material and recruited Kate into the mix because we wanted to have a female voice with the music. I guess it was quite an organic thing coming together, Kate being my sister and Jamie being my best friend. We just formed a really good bond. In Feb 2013, we played our first show and released an EP a little while later.

You have a new album called Double Exposure. Tell me about the inspiration to writing this album?
RF: The inspiration behind our new EP, Double Exposure, we were dealing a lot with personal issues. We kinda used the record as a coping mechanism, relaying feelings and putting it into music. We touch on a lot of mental health issues with this album. Kate and I co-wrote almost all of the lyrics, going between a back and forth, playing ideas off of each other. I would say the number one message and feeling behind Double Exposure is the ability to be ok and knowing that you will be alright if you truly believe in yourself.

How did you come about naming the album Double Exposure?
RF: Double Exposure comes from the lyrical content of the record, two feelings being projected via one medium paired to music. We thought that was a fitting title for what we put together.

Tell me about Es cap ism? What led into writing that song?
Kate Flynn: It just kind of happened. I was home one day and started writing. It was kind of unexpected the lyrics was pretty easy to write, there are no smoking mirrors to them at all. I was kind of reminiscing about a certain time. I wasn't myself, I was going through things that I really did not understand. It was an epiphany after I wrote the song, I was going through something and the song just explains that I was going through something and I just didn't know. I guess I was in denial about it or scared maybe. I guess that is where it all came from, really.

How is the punk scene in Ireland?
RF: It's a small enough scene. We do have a very special and thriving scene of cool band doing their thing. One of our personal favorites is a cool band called Chewing On Tinfoil. It's a funny name but they are one hell of a band. It is a very special scene in Ireland, it is kind of thriving and sometimes it is a case where the band only exists in Ireland. They never really bother taking the time to move forward, tour and travel with their music.