An anonymous person has accused Chris Clavin of Ghost Mice/Plan-it-X records of assault. Although the poster did not state an identity, Clavin himself posted a response to it. Clavin stated, in part, "I don't think I can or should address too much in a public post. I don't think it would help me or anyone else. I am very open to talking to anyone that knows me personally."

In response to the accusation, several bands have stated that they are pulling their material from Plan-It-X. AJJ, Waxahatchee, Kimya Dawson, and Spoonboy all stated that they will not be working with Plan-It-X in the future. You can read the various statements below. 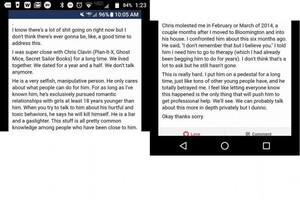 "He is a very selfish, manipulative person. He only cares about what people can do for him. For as long as I’ve known him, he’s exclusively pursued romantic relationships with girls at least 18 years younger than him. When you try to talk to him about his hurtful and toxic behaviors, he says he will kill himself. He is a liar and a gaslighter. This stuff is all pretty common knowledge among people who have been close to him. Chris molested me in February or March of 2014, a couple months after I moved to Bloomington and into his house. I confronted him about this six months ago. He said, “I don’t remember that but I believe you.” I told him I need him to go to therapy (which I had already been begging him to do for years). I don’t think that’s a lot to ask but he still hasn’t gone." 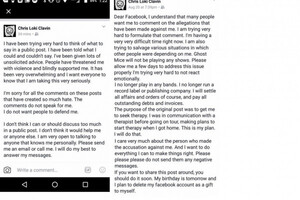 I have been trying very hard to think of what to say in a public post. I have been told what I could and couldn’t say. I’ve been given lots of unsolicited advice. People have threatened me with violence and blindly supported me. It has been very overwhelming and I want everyone to know that I am taking this very seriously.

I’m sorry for all the comments on these posts that have created so much hate. The comments do not speak for me. I do not want people to defend me.

I don’t think I can or should discuss too much in a public post. I don’t think it would help me or anyone else. I am very open to talking to anyone that knows me personally. Please send me an email or call me. I will do my best to answer my messages.

I no longer play in any bands. I no longer run a record label or publishing company. I will settle all affairs and orders of course, and pay all outstanding debts and invoices.

The purpose of the original post was to get me to seek therapy. I was in communication with a therapist before going on tour, making plans to start therapy when I got home. This is my plan. I will do that.

I care very much about the person who made the accusation against me. And I want to do everything I can to make things right. Please please please do not send them any negative messages.

If you want to share this post around, you should do it soon. My birthday is tomorrow and I plan to delete my facebook account as a gift to myself. I am extremely grateful for my time in the DIY punk scene.

Hannah O'Connor (Ghost Mice) Statement " I do not think social media is the correct place to address all the recent issues surrounding my friend Chris. I believe that through our local community we can talk face to face, we can address accountability, and we can work on a positive outcome for everyone involved including Chris.

I started playing music twenty years ago with Chris. I have known him longer than most people have. We sang songs and spoke about having respect for everything and everyone. I’m trying to continue with this message. We must respect each other, even if our friends make mistakes. True friends do not just walk away from conflict. We need to be there for each other.

Since I have been Chris’ friend for a long time, I know that he is being accused of things he has not done. I know there are a lot of false allegations, rumors, and lies spreading very fast about him. I ask you all respectfully, Please stop spreading lies. It is only going to make this situation much worse for everyone involved.

As some of you may know, AJJ released music on plan-it-x records in the past. Over the last day, it has come to light that the label's owner, Chris Clavin, has been accused of and has acknowledged a pattern of sexual abuse. Our band in no way condones or tolerates this type of behavior. Our thoughts and support go out to the survivors. Thank you for speaking up, we believe you.

We will be pulling our music from the plan-it-x catalog and re-releasing it on our own at a later date.

People in bands: Please don't exploit your notoriety in the scene to try to sleep with those who look up to you. They deserve better than that. Consent is non-negotiable, and if you find yourself abusing and manipulating those around you, remember that you can and should seek help.

Keep looking out for one another.

with love and respect, AJJ

in response to chris clavin's abusive behavior, i've asked him to stop selling my music on plan-it-x. my love and heartbreak goes out to survivors of his abuse and all survivors.

"Years ago I found Chris Clavin’s business practices questionable and asked him to stop selling the Antsy Pants record on Plan-It-X. I have had nothing to do with the label since. I have always found it creepy that he would date fans that were so much younger than him but I always thought his girlfriends were consenting adults and therefore it was none of my business. I didn’t realize there was non-consensual activity and stuff with underage folks. I did play a few shows with Ghost Mice a couple of years ago that were set up by someone else. I didn’t talk to Chris before or after and we barely spoke at the shows. I had been told that he was possibly dangerous but I didn’t have the info that I have gotten today from reading posts and comments about the accusations. I should have just said no. I am sickened by this and I support everyone who has been victimized by him. I’m sorry if you felt hurt because I played those shows. Had I really known about this stuff I would’ve said no. I hope you all find healing. I’m sorry for taking awhile to say anything. I’m super out of the loop these days. Ugh.

Videos: The World Is A Beautiful Place & I Am No Longer Afraid To Die: “Marine Tigers”