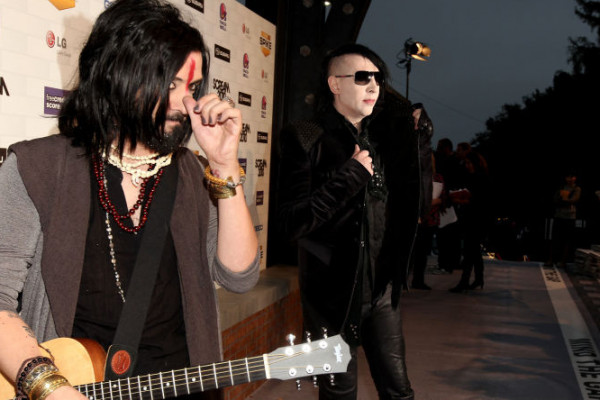 Marilyn Manson has fired Twiggy Ramirez, real name Jeordie White, from his band. Last Friday, Jessicka Addams, who was in the band Jack Off Jill, detailed a lengthy post where she accused White of physical and emotional abuse. Yesterday, in response to that post, Manson issued the following statement: "I have decided to part ways with Jeordie White as a member of Marilyn Manson. He will be replaced for the upcoming tour. I wish him well." See Addams' full statement below.

I have lived with the overwhelming shame and guilt of being raped for well over 20 years now. Like many survivors, I unknowingly hid an abusive relationship in a most unhealthy way, masking it behind a fun loving, creatively artistic facade I struggled to wear on the outside world. Since I roamed in similar musical circles and shared many friends with this rapist, the shock of bumping into him in social situations would leave me sick to my stomach. I’d sometimes find myself drinking too much to pretend he was not there. These unbearable occurrences often tested my own limits or my strengths, yet I found my own weakened behavior seemingly sickened me every unfortunate time I found myself in the same room as him. I did not want him to own the power I assumed was his in every unwarranted encounter, so I eventually compartmentalized the recurring nightmares of running into my rapist, Jeordie White.

In 1997, I was warned by my band’s record company that if I revealed my story publically, there would be a very good chance that my band Jack Off Jill would be black balled by concert promoters, radio programmers, and other bands and their managers. Jack Off Jill was also warned of running the risk of losing our coveted record deal (which they gave us!!,) as they were certain no one would ever take a rape victim in this male dominated music business seriously, nevermind a ferocious, disenfranchised, outspoken overweight front woman such as myself! The label blatantly feared the big machine behind Marilyn Manson would use their power to destroy not only Jack Off Jill, but my name, Jessicka, as well. The pressure and guilt of the inevitable repercussions of my rape story affecting my band’s livelihood, happiness and success kept me silent for years.

In 2015, while playing some reunion shows with the original line up of Jack Off Jill, Alternative Press Magazine asked me in an interview “What would older, wiser Jessicka tell her wilder, 19-year-old self?” My reply was: “Don't allow anybody—especially your current boyfriend—to verbally ridicule you, psychically abuse and rape you, fat-shame you, break your spirit, make you second-guess yourself and ultimately steal your identity. Don't worry: He’ll get trapped in the green dress he stole. It becomes his curse rather than a gift, trust me."

This statement may have seemed vague to most, but to many Jack Off Jill fans, they understood my words loud and clear. I began to receive an enormous amount of emails of support and love. And unfortunately, the stories started to unspool. Women (even young girls) revealed their horror stories, and all of a sudden I was not alone. I was not the only one who was a victim of my rapist. Others had also been abused by the man I was referencing.

As all of these women were reaching out to me, I had been recovering from a near death illness. The amount of guilt I felt for not reporting him when my rape initially occurred really began to eat at me. Even with my incredibly supportive husband at my side, the compunction of not speaking my truth hit me like a freight train. The bitter tears of self reproach made my chances of my own recovery feel …unattainable.

In all this dismay, I made another vague reference on July 19 of this year on Facebook. This post, like my emotions, was all over the place. I was upset. I was angry. I had had enough, and was still dealing with pain, both psychical and visceral. Who is anyone to say what a survivor should or should not have done? Or should or should not have said? There was no playbook for me to read to navigate the right way to tell my story. I just survived on rage an unfocused instinct. Is there a time limit on telling the truth or does it expire with age? Is there a right way to say it? It being the truth. 20 plus years of hiding this shame and rage, so I wouldn’t rock anyone’s boats, or roll any heads? Time was running out for me. I’d had enough.

After much needed therapy, and long mindful and emotional discussions with my closest friends and family who kept my secret “safe” for me all these years, I have finally made the right decision. To tell MY STORY.

I met Jeordie White when I was 18 years old. I was not experienced in healthy relationships, and up until meeting him I assumed all relationships were that women’s role was to act subservient. Unfortunately, this was all I knew, as I had grown up with an abusive father who conditioned me this way.

We moved in with each other rather quickly, much to my mother and Aunt's dismay. We lived with a roommate named Pete. Pete was kind, caring, and treated me like a younger sister. He often protected me when Jeordie's temper began to show itself. In some warped way, this became my unhinged make-believe 2nd family.

Once our band Jack Off Jill started to gain a following locally, abuse and mild violence between Jeordie and I began to escalate. He got increasingly jealous when I hung out with male friends. He jumped into the New River as a protest to me giving a male friend a ride home. He began to body shame me. He slashed my tires. When I came home late one night, he put one of the stuffed animals he bought me into the burning oven in the kitchen. But, I stayed, because I was conditioned since a child to endure my abuser. And this for me… was love at 19.

The physical abuse did not start until a few months later when Jeordie took a cage full of our pet white mice and dumped them into my mother's car that I was borrowing at the time. That is the first day I can remember him hitting me over me over and over as the mice scattered. He later apologized profusely and said it would never happen again.

But it happened again, and again, and often. He stacked junk yard TVs in front of my car so I could not leave as he did not have a car or could drive at the time. Everything he did was in order to control me or fat shame me. I fought back, but I was never able to find the courage to leave. I was broken. He was able to take my power away while still projecting that he cared for me.

On Christmas Eve of 1993, my friend Brad Stewart aka Gidget Geinof (bass player and co-founder of Marilyn Manson) was hospitalized after overdosing on heroin. While hospitalized, Brad received a message from Marilyn Manson's lawyer via FedEx that he was fired due to his drug use. Brad was replaced by Jeordie White, who Manson renamed Twiggy Ramirez. In order to cement his spot and further humiliate Brad and myself (who he thought I was having an affair with), Jeordie adopted Brad's colorful dreadlocks, moppet persona, and stripped tights with shorts look. He also began to wear my thrift store dresses and put on his make up like mine. He eventually would get dresses made to look exactly like the ones I wore. Jeordie overnight went from dressing like he was in Metallica to unabashedly wearing dresses in Marilyn Manson within weeks. Not only did he abuse me, but he also managed to unapologetically take an identity that I created for myself, and run with this as his own.

Trent Reznor was in South Florida around this time and we all went out on night. Trent and I struck up a conversation and Jeordie became so enraged he demanded we leave immediately. He began driving my car erratically on the highway, all the while punching me the chest several times,knocking the air out of my lungs. He proceeded to rip off the rear view mirror and threw it out the open window. Throughout the madness, this was a rather poignant moment. He just couldn’t bear to face himself in that mirror. So he proceeded to destroy it. Perhaps after everything he had done to somebody he claimed he loved was the sick reason he needed to become somebody else.

I feared for my life that night. I stayed awake while he slept. At this point I wanted to leave him, but at this time most of my friends who had not moved away were also too enmeshed in the Manson camp to find a way to do the right thing and stand up for me. No one was comfortable speaking about it, let alone thinking of exposing to the world the horror I was dealing with.

During a short break on tour opening for Nine Inch Nails,

Jeordie returned home to what was just Pete's apartment, as I was now staying with friends. I knew at that point that Jeordie had not been faithful on tour, including being with women whom I to this day respect and considered my musical contemporaries. All this led to an argument I never saw coming. He forced me on to the floor with his hand around my neck. I said NO. I said NO. I said it so loud enough, that Pete came rushing in from the other room to get him off of me. But I had been raped. I had been raped by somebody I thought I loved. That night I slept in Pete's bed and cried myself to sleep. Neither of us discussed it until years later as we both had our own shame about not reporting it.

It's never easy to tell the truth when you know how much backlash you'll receive. But feeling guilt and shame about now knowing I am not my rapist’s only survivor has been an even worse albatross to bear.

I saw Jeordie throughout the 90's. I even toured with Manson in 99' after being convinced by my label it was best for our band. After that I was tired of being told what was best for me by people who did not care if these decisions were painful or put me in harms way.

Some of you reading this may know Jeordie White. You might know him as the funny guy who you shared a moment with. Or the guy who held the door for you when you left the gig. Or the cool guy who played on your last album. I know first hand that Jeordie, but I also have lived with and survived the other, less known Jeordie White.

For women to own our power we must stand up for each other. It's the only way we can confront and combat men who think they hold power over us. I am thankful to know that there are men out there who do not share this gross ideology and stand with us. This is an intersectional uphill battle for women and the men who are scared for their reputation with other men to defend us.

To those of you who are reading this and it has allowed you to come to terms with your demons, I am sending you all of the love in my heart, the support I can offer, and the respect you all so deserve.

Interviews: Neil Wayne and Josh Lewis of The Bombpops

Interviews: PUP to perform on 'The Chris Gethard Show'