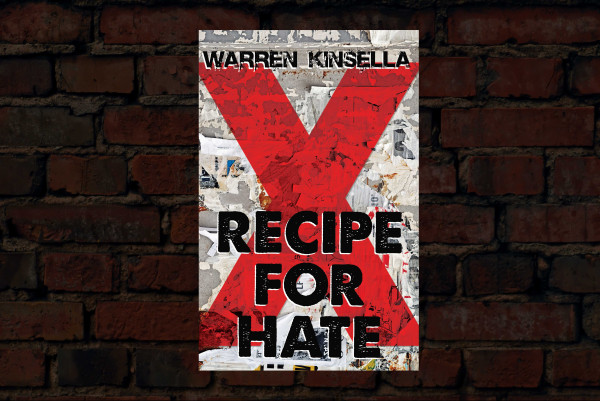 It's a momentous fall for Warren Kinsella, the Toronto-based author, lawyer, political consultant, and veteran punk musician. This November sees both the release of his new novel Recipe For Hate, and a new album from his band Shit From Hell, titled SFH Kinda Suck. We're excited to have copies of both to give away. Check below for details and enter now!

SFH Kinda Suck is the fourth studio album from the band. It was recorded at Iguana Studios by Nick Lobodycz in the summer of 2017. Along with a slate of new tracks like "TV Show," "Kinda Sucks," and "Eighties Dance Song," the album's home to the band's infamous tribute to the most powerful haircut in the world, "Donald Trump is an Asshole." The record also features "Ramones Song," a tribute to da brudders, and a cover of The Outcasts' "Self-Conscious Over You."

SFH Kinda Suck is being released across North America and Europe by Ugly Pop.

Recipe For Hate is Kinsella's first young adult novel and picks up on themes from both his non-fiction work and his musical background.

How a group of Portland, Maine, punks defeated a murderous gang of neo-Nazis.

The X Gang is a group of punks led by the scarred, silent, and mostly unreadable Christopher X. His best friend, Kurt Blank, is a hulking and talented punk guitarist living in the closet. Sisters Patti and Betty Upchuck form the core of the feminist Punk Rock Virgins band, and are the closest to X and Kurt. Assorted hangers-on and young upstarts fill out the X Gang’s orbit: the Hot Nasties, the Social Blemishes, and even the legendary Joe Strummer of the Clash. Together, they’ve all but taken over Gary’s, an old biker bar. Then over one dark weekend, a bloody crime nearly brings it all to an end.

Based on real events, Warren Kinsella tells the story of the X Gang’s punk lives — the community hall gigs, the antiracism rallies, the fanzines and poetry and art, and what happened after the brutal murders of two of their friends.

Sound cool? Publishers Weekly thought so. They called it an "unflinching page-turner" and a "fascinating glimpse into the early punk scene."

We've got a pair of copies of both the book and the new record to give away. Click here to enter the draw.

Recipe For Hate is published by Dundurn.

A launch party for both Recipe For Hate and SFH Kinda Suck will take place at Toronto's Bovine Sex Club on Saturday, November 18 with support from Garage Baby. You can find more details at the venue.