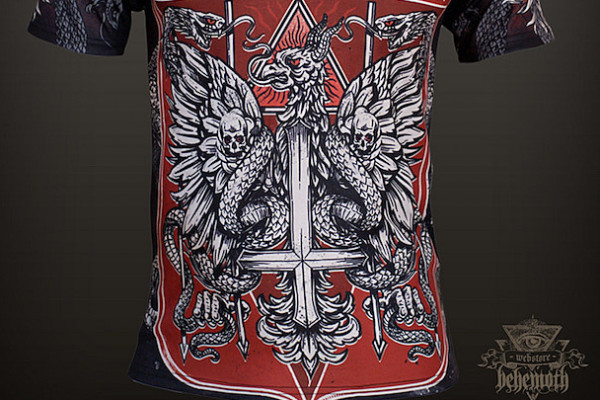 Contributed by tonyjmccarthy, Posted by John Gentile 2 years ago

Behemoth frontman Adam “Nergal” Darski and designer Rafal Wechterowicz have been charged with insulting the Polish national emblem. The Polish authorities felt that their newest t-shirt design insulted their national coat of arms, which in Poland is a punishable offense. The design portrays a coat of arms with its centerpiece being a inverted cross. They have pled “not guilty” to the charges and if convicted will have to pay a fine and may be incarcerated for a short period of time. Nergal stated, "Well… this is the first thing that hit's me after coming back from a relaxing and sunny holiday trip. Me and 2 other dudes r accused of profaning Polish emblem. What a bummer! PIS-driven Poland is trying its best to nail my ass down… as an example I guess. But first thing is: it is NOT a Polish emblem. Second… let's leave those arguments for the court case which is to begin shortly…! Is their limits to their obscurity and blindness? Bring it on."

Videos: Corrosion Of Conformity: “The Luddite”