All Souls on their new album, metaphysics, and flamenco 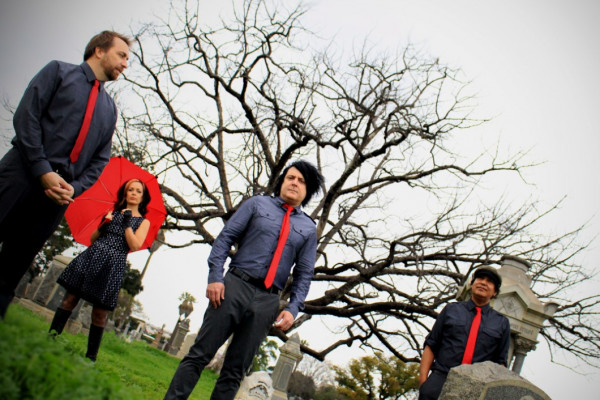 Totimoshi is now at rest. After some 20 years, the experimental desert rockers have ascended into the ether. But, in their wake, All Souls have been re-born. Comprised of Totimoshi's brain and backbone, string slinger Antonio Aguilar and bassist Meg Castellanos, All Souls also includes Tony Tornay of Fatso Jetson on drums and Erik Trammell of Black Elk on the bass. The band's new, self-titled album is out February 9th, so Punknews' John Gentile spoke with Aguilar and Castellanos about the new record, cosmic connections, and how to do the flamenco. Check it out below.

Years ago, when I first started going to nonrockstar shows, I saw Totimoshi in San Jose and asked if I could get a discount if I bought two records instead of one. First, let me offer my sincerest apologies for my crass behavior. I was young and naïve and did not understand the niceties of buying merch. Do you remember this, has it scarred you in any way, and how can I make amends? It has tormented me for years.
Meg: I don’t remember. It takes a lot more to offend me! Honestly you’re not the first nor the last to ask for a discount at the merch table. You can redeem yourself by buying the new All Souls CD, vinyl and T-shirt.

Was the decision to form as All Souls, instead of make another Totimoshi record, organic or but the result of specific planning?
Antonio: Totimoshi is on a long-standing hiatus due to our drummer Chris Fugitt moving back to Kansas City. We tried to continue without him but it didn't feel right. For a while I was in a band called Last Days of Ancient Sunlight with my friend Ferdie who was formerly in the band 400 Blows. Meg and I also started an acoustic band called Alma Sangre which incorporated Spanish guitar with dance. All Souls came together organically after Last Days of Ancient Sunlight imploded. Tony Tornay and myself had been trying to start a band together for years. We even jammed out and recorded a few years ago. But as time went on he'd get busy, then I'd get busy. Suddenly I found myself without a rock band and started talking more and more with Tornay about starting a band. Right about that time Erik Trammell moved back to Los Angeles from Austin. Erik and I have been friends for a super long time. After he moved back we started talking about writing together - which we eventually did. He'd come over my house and we'd sit in my spare room - he'd play guitar and I'd mostly sing. We ended up with some of the very bare framework for a few of the songs that ended up on the record. Once I had those ideas recorded I sent them to Tony Tornay and asked him if he'd be into trying it out. He said yes. We all invited Meg because we all love her playing and vocals. It was perfect. I feel today like I did that very first day every time we are in a room together writing music. There is a beautiful symmetry that comes out when the 4 of us play together.

Tony, you have stated “Lyrically, I want to keep it a little mysterious. It’s about people in our society who feel like they own the world, act accordingly, and behave in ways that are completely derelict of social responsibility. They’ll never know love or understand that responsibility. They’ll never know anything.” The album was written during the 2016 presidential election. Is there a connection between these two things?
Antonio: In my lyrics, yes. We happened to be writing during that time and yes there are things reflective of that subject matter that manifested in what I wrote, but I'm not the only lyricist in the band. The great thing about this band is that we all write, we are all represented of what gets played and said. It seriously is Art by committee. I love that I get to sing what someone else wrote. It's a sort of relinquishing of control - a celebration of trust. A celebration of All Souls involved.. no pun intended!

“Party Night” is really cool. It reminds me of Bauhaus meets the Stooges. Tell me a little bit about what that song means to you.
Antonio: That's the first song we ever wrote. It was the original "let's come together and write song". I played slide on that song at Tornay's request. Erik wrote that bitchin’ guitar part at the intro, then we just went on from there. I feel like Tornay's drumming on that song set the tone. When he started playing that beat, it really led the song to where it went, which is usually the case - Tornay's drum parts usually lead the writing process into certain directions. Meg's bass parts are amazing, I still smile when we start a song with no bass - then it kicks in - BAM! All of a sudden It sounds so full and round! "Well it's a Fuck or Fight, Party night". Our first baby.

Should one use curse words in music? Is there such a thing as too many curse words?
Antonio: I personally like to cuss, but I'm from the bottom rungs of society. Music? I love cuss words in music!

To me, the cover of the album has sort of an astral Bastet riding a Hawkwind motif. I dig it. Even the band’s name could be a reference to a Catholic Holiday. How important is metaphysics or spirituality to you?
Antonio: Music is my religion. It's reflective in our art, it's reflective in our sound. It personally has been my therapy and my salvation. I humble myself to it, and honor it however and whenever I can.

Meg: my good friend Brooke Kent painted that image. She was kind enough to let us use it. We have collaborated with her on many other projects; the Avenger cover for Totimoshi’s last album, show posters, logos, tons of stuff. We have a great working relationship and share a similar vision so I often rely on her expertise. I am drawn to cosmic imagery, and it lends itself to our name “All Souls” which can mean many things to different people depending on their perspectives. I would classify myself as a spiritual person in that I feel spiritual connections with others dead and alive. I would say the most of the lyrics Antonio and I write are very personal but are written in such a way that it’s open to interpretation for the listener.

Tony, one of the things that I really like about the new record is how heavy, and powerful it is. Yet, I believe you once said something along the lines that you’re more of a fan of the Beach Boys than grindcore.
Antonio: I'm a fan of melody. It is, to me, the deepest mystery music entails. The deeper the melody, the deeper the mystery. My love for the Beach Boys started as a 6 year old. I used to walk to the public library and check out albums to bring home to listen to. I'd listen to them on my little Mickey Mouse turntable that my Mom and Dad gave to me as a birthday present.

What’s your favorite Beach Boys tune?
My favorite song by them - or the first one that really hit me was "In My Room". I used to listen to it over and over and over and literally cry. There is a sadness implied in the melody of that song that the lyrics could never completely measure up to. Funny enough, amazing melody still makes me cry. Meg and I have gone to see the LA Philharmonic a good amount of times since we moved to Los Angeles. Both of us are so alike in that by 10 seconds into the beginning of almost every symphony we are both covered in tears. It was and always will be about the melody. In regards to genre's and their relation to each other - I had the luck of growing up in a little hick town that didn't have the sophistication of genre specific groups. I got to grow up thinking Queen was just as metal as Metallica and as punk as the Butthole Surfers or the DK's. It was a true blessing.

Meg, I believe you are involved in Flamenco. Neat! Can you briefly tell us your history with the art form?
Meg: I have a long history as a dancer but it was flamenco that truly spoke to me and felt like the right form for my body. Maybe it’s my Cuban/Spanish heritage, but on a cellular level it feels familiar even though I didn’t grow up hearing that music. I studied flamenco for many years on and off since we were usually touring. I always wanted to incorporate dance or a theatrical element into a band I was involved with, and encouraged Antonio to sing in Spanish which is his first language. We formed Alma Sangre and this allowed for us to explore writing and performing in a very different and artistic way. I danced flamenco, played the cajon, bass and castanets and put together a projection reel. Antonio played acoustic guitar, wrote and sang songs inspired by the ranchero style of Chavela Vargas, and our good friend Silas Hite played mandolin and percussion. We also got to collaborate with Fredo Ortiz and John Avila. This project was a treat for me. I got to push myself as a visionary, performer, dancer and musician. I hope to get back to it soon, but I think All Souls is taking the lead for a while…

Can and should anyone get into Flamenco? The people doing it always look pretty “pro.” Is it a thing like brain surgery where only the best should do it, or is it like punk, where anyone can give it a shot?
Meg: I think anyone should try anything if they’re drawn to it. But flamenco does take years of intense practice to perfect. I am far from where I would like to be in that art form, but was able to take what I learned and craft it into something personal and original. My goal is to express myself, and flamenco allows that on a deep level incorporating pain, sadness, and loss, not unlike the heavier forms of rock, noise and metal.

As human beings, what is the best thing that we can do, right now, in 2018?
Antonio: Roger Waters said it best… Resist!

Videos: The Murderburgers perform "Stackers are 'AWESOME'" at LFTRR