Here's Our Recap of the Punknews Spring Slamdown! 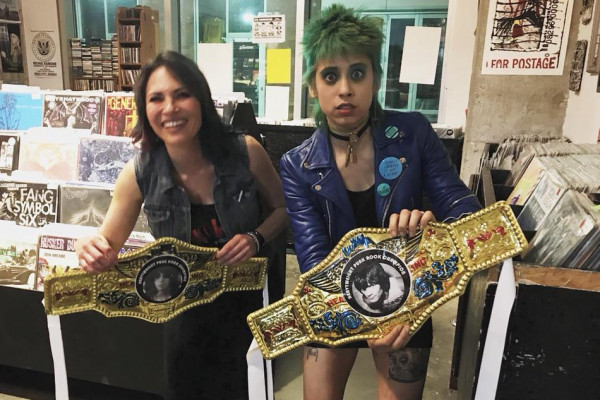 Last night was the Punknews Spring Slamdown in Philly, featuring Crazy & the Brains, The Droogettes, The Up! Up! Ups! and JADE. Check out our recap of the event below!

Last night was the Punknews Spring Slamdown in Philadelphia at Creep Records and it was a real slammer. Four contestants were slated to vie for the title of “World Wide Heavyweight Punk Rock Champion!” Crazy & the Brains, The Droogettes, The Up! Up! Ups!, and JADE.

In a show of goodwill and sportsmanship, each band agreed to bring a piece of equipment and share it on stage in order to minimize downtime between sets. So, the day of the show, it seemed everything was rolling along and all four bands were coming to compete to the best of their ability- nothing personal, just a battle to see who is the true champion.

Except, in a bit of Floyd Mayweather-style mental warfare, a mere three hours before the show, Crazy & the Brains stated that they would be late due to ambiguous “van troubles.” Then, the line of communication went dead! This caused the other bands to grow alarmed as Crazy & the Brains were slotted to the bring the bass amp! Not only that, would Crazy & the Brains even show! Furor broke out, with curses and threats hurled about like a pre-fight press conference. Thank goodness for Creep’s sonic maestro, Soundman Collin for procuring a bass amp and getting the pre-fight preparations back on track… still, Crazy & the Brains were not responding to text messages and phone calls… were they going to make it to the show?! were they just shaking up the other bands to gain a tactical advantage? Or maybe they were they scared to face the other competitors and were looking for any excuse to stay out of the ring?

Never-the-less, we plowed onward, with the doors opening at 7:00pm sharp and 80s fight montage music began blasting across the soundsystem. The stage itsel was set up as a boxing ring with ropes and water buckets in the corners. Attendees were supplied with fight programs that had details about each competitor’s history. There was also a min-Slamdown cardboard cut out that featured all the bands at the show, so attendees could host the Slamdown in their home any time they wanted.

At 7:30, the music cut only for the Rocky Theme to drift across the speaker. Yours Truly then jumped up on the stage, held the title belt above my head, and howled out, “Let’s get ready to ruuuummbbbllleeee!” As the first round bell rang out, the crowd erupted in cheers and JADE took to the stage… or that is, she took to the space just in front of the stage, and in front of the ropes.

This was JADE’s debut set since the collapse of the Philly’s excellent Posers, so no one knew what she was going to do. Taking a note from Ali, JADE kept her opponents (and the crowd) off-kilter by snapping, not into music, but rather, some wiry, dark spoken world about basically hating the world. It was dark, intense, and awesome. Then, in true pro-fight style, she jumped off her stool, rolled under the ropes, snatched up a jagged, black guitar, ripped the ropes in half with her bare hands, and then blasted into her debut solo set.

With just an electric guitar JADE debuted some new tunes including “I’m not the one” and “Kill Yourself.” The tracks bore the masterful composition and melody of her earlier work, but were perhaps more reflective than her earlier tunes with Posers. She then finished her set with a cover of Bonnie Taylor’s “Holding Out for a Hero” and the crowd went nuts. As far as debut sets go, it is hard to top that.

Then, during the first break, Yours Truly collected money for a charity raffle benefitting St. Jude’s Children’s Hospital. The prizes? Signed record by each band. Not too shabby!

After Pat Benetar’s “Hit Me with your best shot” wound down, the second round bell clanged out and the Up! Up! Ups! Jumped right into their set. The UUUs have been getting wilder and spastic and they were in top form last night. Singer Molly, whose voice flips between a soulful cooing and cracking scream in true rock perfection style, sang about killing cheating boyfriends while ripping it up on her guitar. Meanwhile, Nicole, Tim, and Kevin, (bass, guitar and drums) snapped together in that perfect meld of 77-meets-modern punk style. They played with the roots of this genre, but in lieu of fading into the past, played with a contemporary hardness that was lose and spastic. During the the, Molly jumped into the audience and brawled for a few minutes with JADE, despite the event’s strict rules that everything would be decided in the ring. UUU’s finished in an explosive 1-2 song punch and the crowd went nuts.

During the second break, Crazy & the Brains were still absent and there was chattering all about. What was their dastardly plan? The Jersey City rockers couldn’t possibly be scared to fight for the title could they?

With little time to chat, the Round Three bell rang out and the Droogettes jumped right into their non-stop, high energy set. This band is killing it. They’ve got a new album on the way and it seems they’ve really hit their mark. Perfectly meshing the high points of Oi! With high points of early UK punk, the band sped through a 15 song set in about 27 minutes. They had songs about fighting, boozing, and rollerskating. Singer Jenn often jumped into the crowd and despite her pint-sized, caused several 6 footers to retreat. Bassist Rachel slammed down on the bass like she was Dee Dee herself, and delivered several boots to people’s faces. Elijah, on guitar, scowled at the audience and kicked out perfectly sharp, perfectly Spartan riffs. Meanwhile, Ginger just beat the hell out of her drums. (Big ups to Droogettes cut-man Matt for running the door!) As the Droogettes came to their rampaging conclusion, the room was shaking. The crowd went nuts.

Then, just as the final break period kicked off, Crazy & the Brains stormed into the place, hooping and hollering, flashing their t-shirts around, pointing at their logo, and just basically threatening anyone within ear shot. Yours Truly tried to protest only to get popped in the face. I guess it makes sense for a xylophone player to have such a quick jab.

Catb’s took the stag for their debut Phily headline set e and the fourth and final round bell sounded. With a guitar, bass, drums, and a freakin’ xylophone, the band launched into their manic-spastic-freaky stuff thing they do and immediately made it clear that they came to win the title. Frontman Christoph Jesus (as he is now known) was clad in a bathrob, donkey rope, and skipper’s cap and spent the entire set in the audience, jumping in and out of the mosh pit up front. Catb’s songs are riotous, crazed songs to begin with, but live, the mania was taken to another level. Building the core of their tunes around classic punk structure, they took that skeleton and made it something wiry, acerbic, funny, and serious at once. At one point, Jeff Rubin banged on his xylophone in an extended solo and even dragged it out into the audience and let the crowd bang on it. Bassist Brett thundered on the bass looking like an American Paul Simonon. Guitarist Ernest acted as the counterpoint to Chris, hyping it up and ripping out Anthrax worthy solos on stage while Chris bounced around the floor. Drummer Jon cracked on the drums with a violent looseness, which really gave these songs that careening energy that makes them total destroyers.

Catb played a TON of new songs and it really showed that this band is getting better and better and better. Now walking a line between weirdo-art folk and stright up punk rock thrashing, the new songs are propelled by charging riffs, alien lyrics, and Rubin’s violent xylophone playing. I’m not sure I would have ever put “violent” next to xylophone but Rubin proved that it was applicable. Halfway through the Catb set, Jay of Nervous Triggers showed up and did a mini-Operation Ivy cover set in the middle of the Catb set with Catb acting as his backing band! Chris then took the mic again and the band sprinted towards their finale flipping between new tunes and older classics. Their set concluded with an explosive version of “Say my name” where they forced the entire crowd to sit down only to jump up and go crazy in an homage to the Isely Brothers classic. Nuff said, the crowd went nuts.

Immediately after the show concluded, I took the stage for one last time while the judges tabulated the results of the match to determine who was the WORLDWIDE HEAVYWEIGHT PUNK ROCK CHAMPION. Nervously, I held the title belt above my head, and unfolded the judges decision… the result… A FOUR WAY TIE!!!! All four bands were awarded the title and were supplied with a championship belt featuring the face of an original Ramone.

Wow! What a knockout!

The Punknews Spring Slamdown is this Saturday in Philly!!!!