Mickey Rickshaw on being a “professional” band 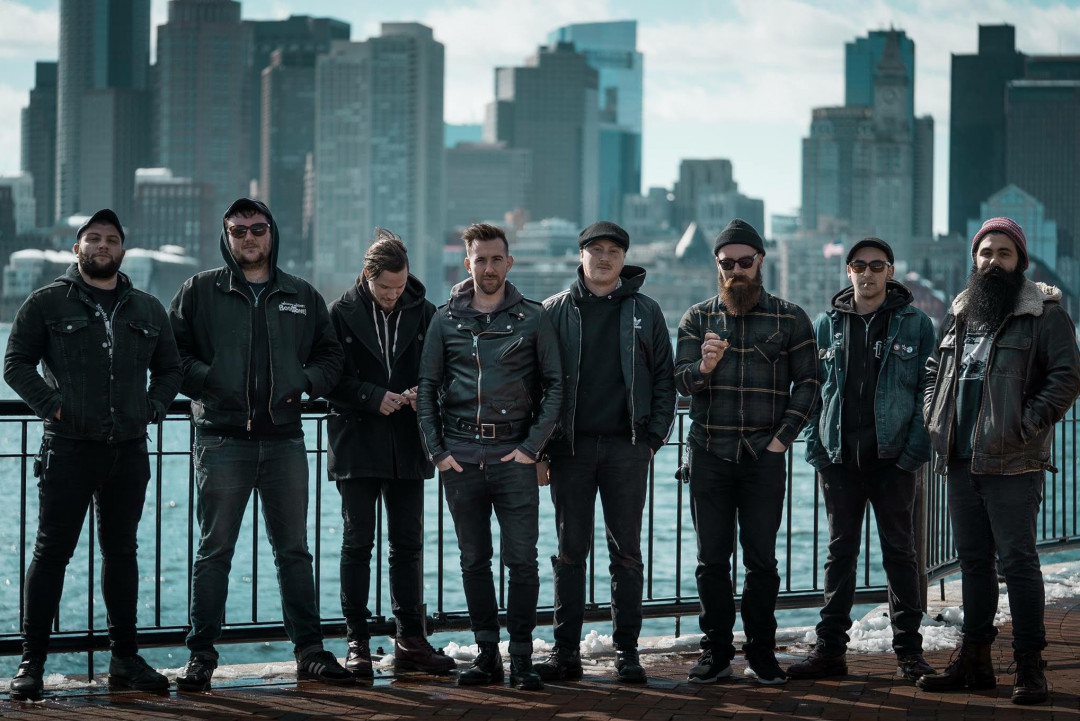 Mickey Rickshaw, an 8-piece band from Boston, has been making waves in the Celtic Punk scene (and beyond) over the past few years. Soon after returning from Flogging Molly’s annual Salty Dog Cruise, the band headed to Asbury Park, NJ to record their new album with Pete Steinkopf of the Bouncing Souls. Punknews Pete Vincelli sat down with Mike Rivkees (who can spit out facts and folklore in any conversation he as), Jimmy Donovan (who made a girl cry ‘cause he snores so loud) and Kyle Goyette (definitely the coolest bouzouki player we know) in Asbury to discuss the cruise and their new record. And with a clink of a few beer mugs, the interview began:

So how about the Flogging Molly Cruise? What was it, your third time? Mike: yeah

I probably already know you’re answer to this, but how was it? Has it gotten better as time went on? Jimmy: My personal favorite was our first one…that was Rancid. It was just like, oh shit, our first go at it, ya know what I mean.

I think it’s pretty cool that it’s not just Irish bands, ya know? Mike: If it was just a boat of Celtic punk, no one would go?

Was there any band you were really looking forward to seeing? Mike: It was really cool seeing Devotchka last year. They’re just one of the coolest bands to watch.

Kyle: Yeah, they do movie soundtracks and stuff like that.

Mike: Their bass player plays tuba and stand up bass. They have Mediterranean sounds…

Kyle: It’s not even stand up, she plays cello

Jimmy: They’re gonna hear this and go, ‘what the fuck, they don’t know anything’.

Kyle: Either way, it was really cool.

What about this year? Jimmy: This year was cool cause The Offspring played.

Jimmy: And they played Smash in its entirety so it was like, ‘oh shit’.

So what night did you guys play? Jimmy: All three.

How’d you pull that off? Jimmy: I don’t know. The last few years we only played one. This year we had a contract for two nights and when the schedule came out, we played three and I think it’s because Buster Shuffle had to drop out.

Kyle: Oh that makes sense, I never put that together.

Mike: It was also really cool to watch Blood or Whiskey and Pinata Protest. That band is coming up, they are basically…if you took a celtic punk band and replaced the Celtic with Mexican, like mariachi punk, it’s like Tex-Mex punk. They’re so sick.

So it’s probably pretty tough cause there’s so many stages and you wanna watch the other bands, right? Jimmy: Yeah, The Offspring was the only band that played up against nobody, they played the pool deck. I wanted to play the pool deck real bad.

Kyle: well yeah, that’s always like a party, ya know, everyone’s jumpin’ in the pool and shit.

Jimmy: The second night we played in the front of the boat, but we went through a storm and so it was like playing drunk, everyone’s rockin’ back and forth and…

Kyle: Yeah, we thought we were doin’ wicked good ‘cause everyone was movin’ but then we realized that no one could stand up anyways. Mike: I went to hand out the mic to the crowd and the entire crowd shifted.

So how about the album? This is your third, right? Mike: Yup, third and the worst (everyone laughs). It’s gonna be the one…ohhh, I almost spilled my beer. Yeah, so this is the first record, I’d say the first fully collaborative record.

So you’re recording with Pete. How’d that come about? Jimmy: We met them on the boat last year.

Mike: we were watching the Souls play, backstage and it was a pretty drunken show and they said, ‘so what do you guys wanna hear?’ And everyone’s like ‘play Shark Attack’, one of their older songs that they didn’t practice a lot with their new drummer and they go ‘sorry, the new drummer doesn’t know it.’ And our drummer just waddles up and goes ‘I know it’ and then pushes their drummer out of the way, adjusts the high hat, moves the seat and he played it flawlessly. So three days after we got home from the boat, they hit us up and they invited us to play with them down here at the Stone Pony. And that was great. Ya know, we’d been listening to them since we were kids so it was really an honor to play with them. And then we were talking to Pete about recording and he said he produces and he said ‘I think we could really put something good together.

Yeah, all the his stuff that I’ve heard sounds awesome. Jimmy: And he’s real easy and comfortable to work with.

Mike: And he really cares about what he’s doing. Even though it’s not his band, it’s his name behind it. So, he really puts a lot into it. It’s awesome.

So the last album bounced around a lot in regards to genre. It had some punk, some hardcore, some ska. Is that a conscious decision or does it just happen that way? Jimmy: It’s kinda the way the songs go.

Kyle: We kinda like that, so we stick with that. Especially now ‘cause this one’s all of us doing it. Mike loves the ska shit so he’s always trying to do something like that.

Jimmy: So does Tom

Mike: Well we have so many influences.

And I think that’s why the last album was so good because it’s kind of chaotic, but it flows well, which is awesome, ‘cause you don’t get bored. Is that the way this one is going too? Mike: So with the genre of Celtic Punk, you can get pigeonholed and it’s a tough genre because a lot of it’s the same. So we’re not singing songs about Guinness, St. Paddy’s Day, and Boston sports.

Kyle: Yeah, I think we only say ‘Boston’ once, and we just put that line in last night.

Mike: And that was just to feel like we have a round up song.

Now are the lyrics mostly you, Mike? Or is that collaborative? Mike: Yeah it’s mostly me.

Jimmy: Kyle’s been tip-toeing his way into telling him they suck.

Kyle: I try not to overstep my bounds, but I can’t help myself

Mike: No, I like to know. If it bugs you, then it’ll bug other people.

Mike: No, you’re very easily bugged. So if it doesn’t bug you, then it’ll be cool with everyone. Kyle’s a harsh critic, but that’s how we work.

Kyle: I let Mike fuck with my parts. And he’s starting to let me fuck with his.

Mike: I just wait ‘til he leaves and then I’ll re-record my own parts (smiles).

So, there’s eight people in the band and the good thing about is that you can get so many different sounds. But logistically, that’s gotta be tough, right? Kyle: Well yeah, it gets hard especially with…

That’s great. So what’s next after recording? Mike: Nothing! (laughs). We’ve got a few tours and festivals in the works, but their in the works, so we really can’t let it out yet, but we’ve got some really cool things comin’ up.

Mike: Yeah, we’re playing one of the club shows and then we fly back for a hometown show the next day.

Kyle: And then come back and finish recording.

You recently played Punk Rock Bowling. The best part about playing these shows, and I’m just speaking for you, is that you get to see all of the other bands.

Jimmy: Yeah, all the bands you grew up on.

And you gotta pretend to be professional. Kyle: Yeah exactly, I gotta hide my boner up in my waistband.

In Memoriam: Steve Soto of the Adolescents has passed away