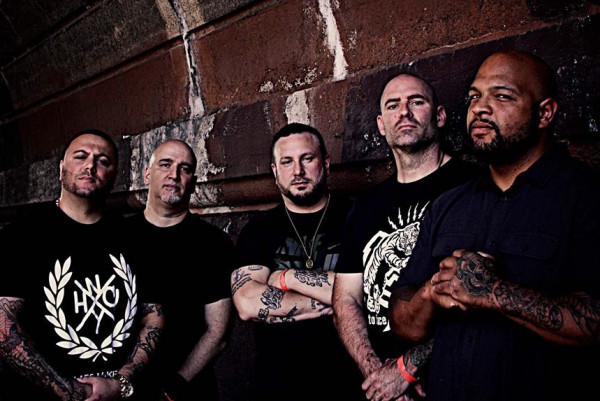 Wisdom in Chains just released their new album Nothing In Nature Respects Weakness. As frontman Mad Joe Black explains, "It’s a reminder that when you feel like giving up you have to keep pushing forward. Nature will not pity you. Life will not pity you. So, make yourself so you can fight through the inevitable struggles." Whew! That's intense. In order to get a glimpse of what drove this album, Punknews' Eric Rosso spoke to Joe himself about the new LP, cellphone addiction, and the concept of hardcore itself.

Thanks for taking the time to talk to me today. It seems like this year is shaping up to be quite the year for veterans of the hardcore scene with new albums by Madball, Terror, Sick Of It All, and of course, Wisdom In Chains. What does it mean to see people you’ve grown up with in the scene still going strong putting new material out in 2018? It’s pretty inspiring. It’s what I thought they would be doing when I first started. I hoped that one day we would all be able to play together. I just hoped one day my band’s name would be mentioned alongside them. We’re very fortunate to have them as mentors. I’m really happy that they are all still playing too.

Nothing In Nature Respects Weakness is your seventh album. I thought the title was an interesting choice given some of the topics explored on the album like mental health and addiction including lead single “Better Than I Was,” items that some people wrongly view as weakness. What made you choose the title and how does it tie into the lyrics on the album? Like you said, some people wrongly view mental health struggles as weaknesses, but there’s a very distinct difference between a health problem and an actual weakness. This album is about recognizing that you have the ability to rise above things that might feel like a weakness. It’s an opportunity to find your strength. So Nothing In Nature Respects Weakness is about not using perceived weakness as an excuse to stop trying.

Periodically throughout life, life forces you to make a decision. Are you going to fight or are you going to give up? It’s one way to know if you’re truly alive or not. A huge part of being a human and how to relate to other people is understanding your own strengths and weaknesses. With regard to “Better Than I Was,” that song is absolutely not about weakness. It’s about strength that you never knew you had.

One of the tracks that jumped out to me on the album, particularly the lyrical content, is “Slow Drown.” The song deals with technology and the sometimes isolating effect it has on a person. The lyric that jumped out to me was “I lost a piece of myself in the shuffle of my phone / the more I ignore the world, the more I consume.” What made you want to tackle this topic? It actually happened when we were starting to write songs for the album. I had come up against writer’s block. That’s what I thought it was at the time. Every time I would sit down to write lyrics or write ideas, I would start flipping through Facebook, flipping through Instagram. Just looking through pictures, wasting time. Wasting my day looking at this screen. It became very evident to me that I could not write lyrics on my phone. It’s too much of a distraction. That’s where the basis of the song came from. It was one of the earlier lyrical concepts of the album because it was my first big roadblock in coming up with all the lyrics and actually focusing on the task at hand.

Yeah, sometimes I think how much I spend flipping through my own phone on a daily basis and other things I could be doing. It’s why it really connected with me when I first heard it. I enjoy social media. I love it. It’s an invaluable tool to us as a band. When we got on MySpace, that was the start of trying to push ourselves to new audiences throughout the world to people in different time zones who you’d think would never get the chance to hear your music. Through social media, we’re all connected, but we’re also so distracted. Some of our brains aren’t built that way where we can multitask like that.

The album also features a lot of great guest vocalists including Freddy Madball and Davin Bernard from Eaten Alive. How did these collaborations come about and who killed it the most on the record? This is just me reaching out to vocalists that I admire. That’s how it happened. We’ve had a very close relationship with Freddy throughout the years and he’s been pivotal in keeping us relevant and on good tours so I always wanted to do something with him. We both knew we were recording new albums throughout the summer. I believe it was Richie (Richie Krutch, guitarist) who had the idea of doing a split 7” with Madball. One song a piece and put it out on Fast Break Records and is a hype for both our new albums. That’s how the song with Freddy came about.

With Davin, I just always loved her voice. She’s a really good frontwoman and I’ve wanted to do a song with her for a while. Matt from Noi!se is on it as well. We in the band love Noi!se. We listen to them on tour. Great band with great lyrics and a really cool vocal style. I was really stoked he could help us out. And our old friend Angelique Buckley who sings on the last song on the CD is an actual trained vocalist, more in the style of a soul singer. To me, that’s the most soulful guest vocalist that we have and will really give people goosebumps.

I can’t really pick one in particular because honestly, I think they all killed it in their own special way, but I think the surprise track is going to be Angelique on “Halfway There.”

I’ve always appreciated the way you’ve centered working class struggles in Wisdom In Chains’ lyrics. In some of your social media posts, the band has lifted up labor unions, including ones that you are in. What does the labor movement mean to you as part of a working class hardcore band? The power to make changes isn’t in the individual. It’s in the group. Hardcore music is about the group. It’s about the scene. It’s not about any one band or one individual. The reason the whole system keeps churning and reinventing itself is because the group decides what they like. The group decides what the proper etiquette is. The group decides who can stay and who’s gotta go. That’s the same thing in a labor union.

I see it every day. We all work for a living and we get to see it in action every day. The group decides we want this and we deserve this and we are going to fight for this. It’s a very similar value system between hardcore and labor unions.

Every year is better than the last year and it’s been steadily building every year. Joe Hardcore is such a smart promotor and he’s so good at building hype and creating little storylines just in the lineup of the bill. There’s always a hidden storyline with Joe. I’ve never seen a promoter who puts as much thought into lineups as Joe Hardcore. There’s little dramas, there’s little things that build excitement. My favorite one we’ve played was last year and I expect this year will be my new favorite.

Anything else you want to share about upcoming Wisdom In Chains’ plans once the album is released? We are working on tours now. We are going to Europe in August and we’re working some more European tours for the winter. We are going to try to do some West Coast and Texas shows. We just want to keep steadily doing what we’ve been doing. It’s a slow, slow grind and we love it. We aren’t going to stop until it’s not any fun anymore.