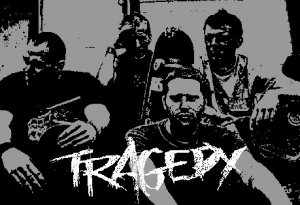 On August 31, crust punkers Tragedy played Tonic Lounge in Portland, Oregon. As per their usual mysterious operations, the band sold an unannounced EP at the merch table. The release is called Fury and is six tracks. It's self-released and was recorded June to July of this year by Billy Anderson at Type Foundry Studios & Everything HZ, Portland Oregon. The band didn't state if the EP would receive a more wide-spread release. However, their previous album, 2012's Darker Days Ahead , received a similarly limited inital release before being issued in a more widespread fashion.