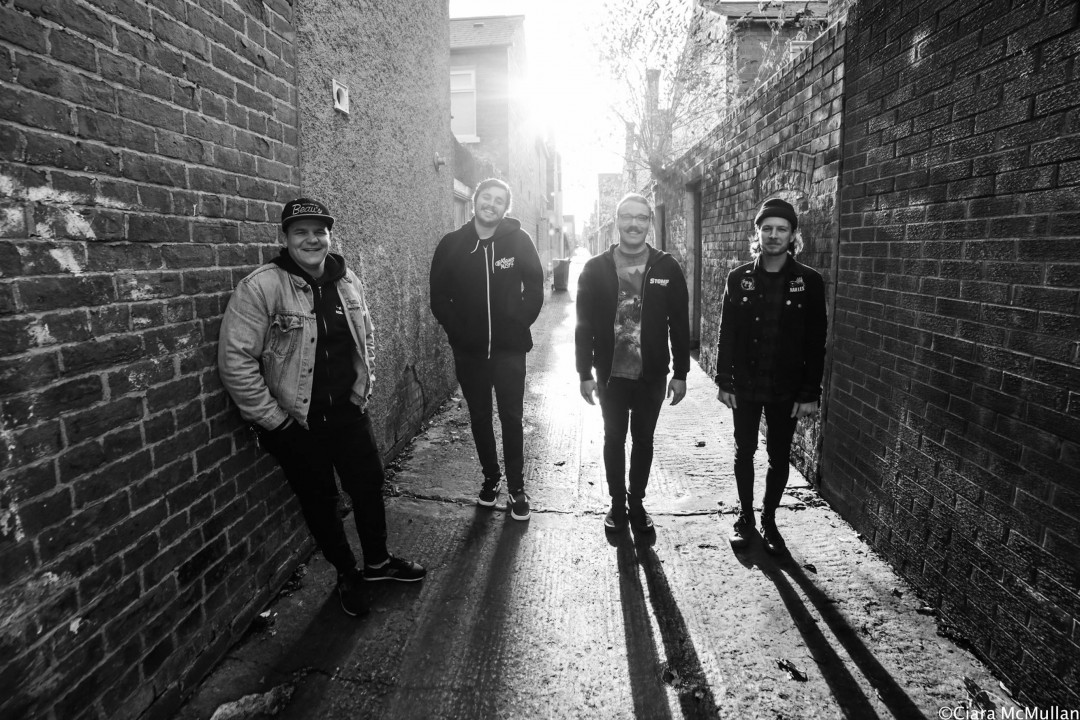 In a few weeks bands from across Canada will converge on the small town of Vanleek Hill, Ontario, better known as the home base of craft brewery Beau's All Natural. The annual Beau's Oktoberfest music festival and charitable fundraiser takes place on September 21 and 22. It features two stages of independent music, including the punk-focused Black Forest stage. That's where you'll find Montreal pop-punk group Lost Love leading sing-alongs to their massively catchy new full-length Good Luck Rassco. We spoke with the band about the record and their upcoming Oktoberfest appearance.

It's been a few years between records for you guys. Comfortable Scars was recorded in early 2016, and you're back now with your new record Good Luck Rassco, what was your experience in the studio like this time out?

Guilhem: Way more fun. Comfortable Scars had the same sound from the first to the last song, and we recorded it on the weekends. With Good Luck Rassco, we worked differently. We tried to get different sounds on different songs. We didn’t want to just sound “punk/rock.” Also, we spent a whole week in the studio to record GLR. It was definitely a blast. Props to Hugo Mudie, Adrian Popovic, and Alex Ortiz for being a cool crew to work with.

Olivier: And even though the studio, Mountain City Recording, was in Montreal, it would have taken us over an hour each morning to get to it, and another hour after to go back to our respective apartments, so we rented an Airbnb near it. That way, we spent the day recording in the studio, and then we would go back to our Airbnb to spend the evening together watching shitty movies on Netflix. It kinda felt like we were on tour.

Vinny: It was really cool! Cannolis, Makers Mark, Palm Bay and I got to hang out with my boys for a week… what else can I ask for?

Lost Love has captured a certain joyous, upbeat levity in your sound that feels rare these days. We're living in such a fucked up world, what keeps you in that headspace? Are there songs that you look at and say "this doesn't fit" or "it's too dark" for Lost Love.

Vinny: To be honest Guilhem writes most of our stuff, so he's probably the best one to answer that question. But if you ask me, I remember when we were in the process of writing Comfortable scars we came up with a song that was named "Forever Jaded." That song's purpose was to criticize people with tendencies to be hateful and pessimistic. Even though it never saw the light of the day, I feel that moment has been important. As individuals, we understood that being kind and optimistic ourselves was the best way to impact others. I'm not sure that answered the question, but this is surely a great piece of band history.

Guilhem: Actually, the first songs we wrote and recorded when we started the band were darker. With a name like “Lost Love,” it’s clear we were not in a nice place when we started this project. After playing a lot of shows with those darker songs, I figured it’d be better to sing about positive things. Like burritos and sandwiches.

Olivier: And bees! Also, when you take a look at our song titles, I think it’s obvious that we have a good sense of humour even if the world is kinda fucked right now. Like Guilhem said, we’re all trying to stay positive and to have a good time.

Guilhem you released a solo acoustic record back in May under your own name. Is there a different mindset you had to undertake when writing for that project versus the band?

Guilhem: Not really. Most of those songs could’ve been Lost Love’s songs, but they ended up being on that solo record because I needed one for when I’m playing solo shows, which happens more and more often. But I have tons of new songs written at the moment, and I’m starting to feel like some of them are definitely more Lost Love songs than solo songs.

I'm always struck by how deep Montreal's independent music scene runs. Countless cool bands are playing locally that never get mentioned, even in English Canada, let alone down in the States. Which bands from the Montreal scene should people check out today?

Guilhem: Bucky Harris, Barrasso, Ariane Zita. They all released an EP or an album this year. Check it out.

So Good Luck Rassco was released in Europe on the French label Guerilla Asso, and there's quite a bit of footage online of you guys performing in Paris. What's your relationship with the European market? Are there inroads to the European punk scene that Quebecois bands can make based on language?

Vinny: To make a long story short, bands from France have been touring Quebec massively since Guerilla Poubelle stepped foot on the continent back in 2005. So it's been a little over a decade that we've been building that relationship. Does speaking French help? Yes.

Guilhem: We’ve always been told that Europe is a paradise for underground touring bands. We first went there in 2016, and now we just came back from our 3rd tour over there (and I did 2 solo tours as well). I think they have a totally different culture on how to book a show, host a band, attend a show, etc. People are more respectful, even to smaller bands. It feels like they care. Also, I feel like wherever we go (outside of Quebec) we get that “exotic” factor from being French Canadians. I think that we play around with that factor a lot and we’re pretty good at making fun of ourselves and not taking ourselves seriously.

Lost Love, of course, has a close association with Pouzza Fest, and you've been announced as one of the Canadian performers playing Fest this year (and we're of course in the leadup to Oktoberfest later this month). Do you approach these big festival shows differently from club gigs? Are there songs that work better in one environment or the other?

Guilhem: Nah. We’re the same band whether we play in front of 5 people in Ottawa or 100 people in Munich. We’re about to play a show in Quebec City on a line-up with a lot of skate-punk bands, and we thought about changing our setlist to fit the mould. But we won’t, because it’s going to be way funnier to see how a skate-punk crowd reacts to our poppy/Weezerish songs than to try to fit their taste.

Olivier: I totally agree. If we play songs that we love and it looks like we’re having fun on stage, I feel that the people watching us will be more inclined to have a good time and appreciate our music, whether they’re into metal, punk, rap, indie rock, pop or whatever. If they like us, that’s cool. If they hate us, that’s cool too.

Vinny: Y’a rien de mieux que s’en calicer ! Which translates to: the best approach is to not give a fuck. Our preparations are no different, but the stress level definitely is!