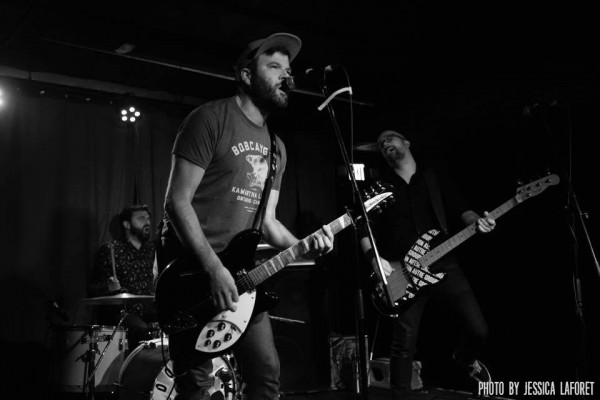 Toronto power-pop trio Talk Show Host turned a lot of heads with Not Here To Make Friends, an EP that captured the sonic spirit of the 90s Fat sound. The band's gearing up to take the stage at Beau's annual Oktoberfest celebration in Vanleek Hill, Ontario on Friday, September 21. I spoke with Chris, the trio's vocalist and guitarist, about enraging MRA trolls, the ups and downs of the Toronto punk scene, and the dream of playing with Sloan.

You guys released a video for the song "I Hate Men (I Hate All Men)," and while attacking toxic masculinity doesn’t sound all that controversial on paper, I’ve got to imagine the very fact that it had that tile drew all sorts of MRA nuts and alt-right wackos out of the woodwork. How crazy did the blowback get and, in retrospect, was it worth poking that beehive?

It took almost a full year for the blowback to start; we dropped the video in March and it got picked up by Punknews, which actually gave us our first taste of the kind of Dude Response that would eventually flood the YouTube page (i.e. “these soyboys are just using the feminist card to get laid"). BlankTV reposted the video and that’s when we started getting the real hate-filled stuff. It was all mostly the same talking points repeated endlessly (I’d never even HEARD the term “soyboys" before and now I’ve proudly added it to my list of self-descriptors), although the most unsettling part was when it got picked up by an MRA news site and they carefully listed the names of the women we’d worked with on the song and the video at the very top of the article. Of course, they didn’t mention any of us by name.

That made me nervous, but nothing came of it. It all died down after a month or so but we still get weekly comments about how cucked we all are. It was definitely worth it. I know it’s not super original or even that difficult to rile the toxic dude base nowadays but I do think the issue isn’t nearly as discussed in our little corner of the scene as it should be. It was a pretty effective statement of intent from us as well; no one’s expecting anthems about drinking beer from us in the future (for better or worse). And finally, it gave us some great pull quotes for our advertising. My favourite: “the music is catchy but the lyrics are cancer."

Not Here To Make Friends really reminds me of the bands you’d hear on Fat Wreck in the 90s, how’d you settle on that sound?

We seem to have landed on that organically. Fab (bass) and I (Chris, guitars) listened to a lot of that stuff growing up, while Sean (drums) was always more of the alt/indie rock guy. I started this band in reaction to my last band, which was in that full-on, double-time 90s skate punk vein that I just didn’t listen to anymore. I actually thought Talk Show Host was going to be less of a punk band, but I guess it’s just in our blood. Any time I try to write something quieter, we end up recording it with fifty guitars and stadium drums. We try to throw in weird curveballs here and there with time signature shifts and stuff, but in the end the Fat Wreck comparison is one of our most frequent. Although we have also on separate occasions been compared to Cream (?) and Guided by Voices (??).

You’ve had an EP out every year since getting together. It seems like you’re about due for the next release, what’s Talk Show Host have coming up?

We have two songs coming out on a three-way split via the Montreal label PCT Musique, with Chump (from Belgium!) and BIAS (from France!). That’s out September 14th, and we’re also slowly writing songs for our first full-length, cuz it’s time for one of those. Hopefully, we can get our shit together and have that out sometime late next spring in time for another Euro tour.

How healthy is the Toronto pop-punk scene these days? You guys seem to have no shortage of gigs in town. What TO bands should people have on their radar?

There are so many offshoots of the scene nowadays that it’s hard to keep up. We have a fairly steady run of gigs here but I think it’s more cuz we are friendly and we show up on time that anyone books us consistently. It’s certainly not for our draw. We aren’t part of the big pop/Warped movement like Seaway et al, and we aren’t part of the super personal anthemic scene like PUP or Penske, so we’re not entirely sure where our place is here. We love to play but we’ve come to accept that if we’re gonna catch on, it probably won’t be in Toronto. So it’s definitely a healthy scene, but you’ve gotta find your niche.

Really, there’s no shortage of all-white-dude bands like us doing the same old stuff. I think the true health of the scene here lies with the younger bands who’ve managed to carve out a more representational niche. There’s Pseudo, who are gonna be huge soon. There’s Wordplay, who have a great singer/songwriter frontperson and they’re just getting better and better. There’s a hardcore band called PROM NITE who put out the best local record last year. And if I gotta rep one all-white-dude band who are criminally ignored and who are also not called Talk Show Host, it’s gonna be Sixteen Scandals.

There’s seems to be some frustration with aspects of the music scene coming through in the lyrics of “We're Not Here to Make Friends." Can you share a bit on what inspired that track?

Yeah, that’s one aspect of the scene that we’ve found super unhealthy. There are so many bands that it’s hard to garner the attention you might think you deserve, and that seems to have created a persistent fog of rockstar bullshit that has blanketed a lot of the scene. I honestly can’t remember the last show we played where all the bands stayed until the end. They’ll use our gear and then pack up the second their set is done. There’s very little camaraderie at our level and so when we DO make friends here, we tend to latch onto them for dear life.

For that song in particular, it was inspired by a show we played on a Tuesday at Cherry Cola’s in downtown TO. One of the bands thought they should be headlining and were friendly until they realized that we were going on last. This is already silly - playing last on a Tuesday at Cherry Cola’s is about as far from “headlining" as you can possibly get. They got super frosty but they still had no qualms about using our gear. The guitarist’s amp even stopped working halfway through their set so I jumped in with mine. We were doing our line check afterwards when their bass player flashed us the devil horns and mouthed “rock on" as she led the band out the door, directly past the stage. We played to about three people that night. I wish that was an anomalous story, but that’s a big part of the Toronto scene. Bands don’t want to support other bands, and that’s what the song is about.

I also want to point out that musically, I stole the structure from Sloan’s “It’s In You, It’s In Me." Their hardcore 7-inch is ACES. Super stoked to see them at Beau’s and tell everyone “WE PLAYED WITH SLOAN" which is mostly (entirely) a lie, but still.

[While the dream of playing with Sloan won't (sort of) become real until Beau's Oktoberfest in a few weeks, Talk Show Host does have another big cancon connection: Last year the performed a fun cover of The Tragically Hip's 1998 hit "Fireworks," with all proceeds from the sale of the download donated to the Gord Downie Fund for Brain Cancer Research -ed]

More than a lot of bands your size, you seem to have the operational side of things nailed. Your social presence is everywhere and everything about TSH seems really well organized. This isn’t a question that’s going to make anyone sound cool, but how hard has that been to achieve and maintain? The Talk Show Host operation seems way more purposefully together than a lot of DIY bands.

We’re lucky cuz Fab is a digital marketer professionally, so he’s been able to guide our ship in that regard. I’m also decent at graphic design and Photoshop, so that helps because most local bands have fucking TERRIBLE taste in fonts. It did take a while for me, personally, to accept that the social media thing is not just a big part of being in a band nowadays - it’s probably the biggest. I was slow to start the band Instagram account but when I realized how much positive feedback and dopamine hits I could get by posting stupid jokes and pictures of my cat, it sunk in.

We work hard with our songwriting and (slightly less) hard at making sure we don’t suck live, but creating and maintaining that brand is kind of the overarching thing in 2018. We don’t have a particularly interesting narrative (again, we’re Yet Another All-White-Dude Band so, honestly, why would anyone give a shit?) but if we can hook them in by being clever on the internet, that helps us rise above the pack a bit. It doesn’t bring people to shows very often yet, but it definitely gets our name stuck in people’s craw. Probably the weirdest moment of my band “career" came at Pouzza this year. We were standing at Fouf’s chatting to some friends when someone walked by, overheard the name of our band and said to me “oh shit, you’re in Talk Show Host? I LOVE your social media presence!" I’ve been oddly proud of that ever since.

Not Here to Make Friends is now available at Bandcamp. The PCT Musique split can be pre-ordered here.

Videos: Clowns: "I Shaved My Legs For You"