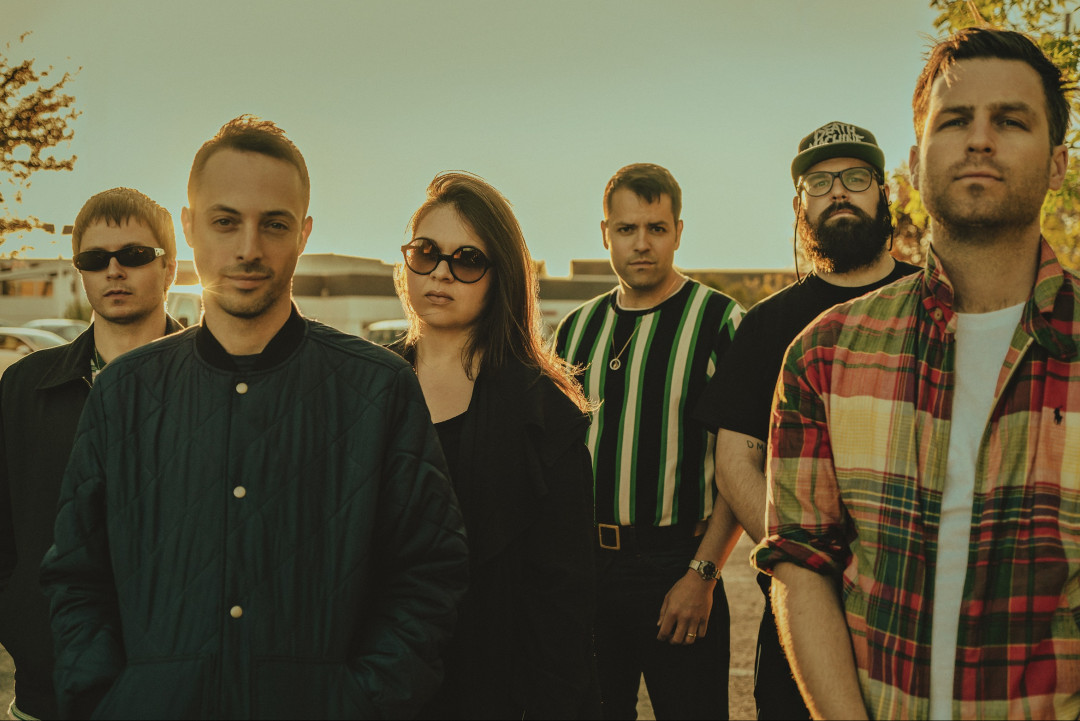 After Fucked Up released their last record, the compact Glass Boys in 2014, the band had nothing left to lose. The record didn't get a huge reception, people liked it, but didn't love it's relatively understated texture, and it sort of came and went. So, with the freedom of "no future expectations," the band recharged, and went for it with a double disc, cosmic traveling, genre warping, whacked out, concept twisitng, meta-ficitonal melting, mind blasting, weirdo punk rock album. It also has a saxophone on it.

The Canadian band started out a basically a straight up hardcore band that kept people guessing with their use of sigils and references to their guru, a mysterious figure named "David Eliade." Over the years, they got weirder with multiple 20 minute Hawkwindian opuses based on the Chinese zodiac, albums about David himself bombing factories, and eventually, they morphed into their Glass Boys selves- a *gasp* single disc album wherein they contemplated themselves.

Now, some four years removed from their calmer statement, they are back with Dose Your Dreams, a house smasher if there ever was one, that is just the kind of thing that their spaciest fans want. So, because they are about to release an album that certainly will be a landmark in their career, Punknews' John Gentile spoke to Haliechuk about dreams themselves, Buddhist thought, and why the saxophone is cool.

In an earlier interview, you stated “if I was a fan of Fucked Up, I'd be like, ‘I don't care what you think about the chronology of punk -- just put fuckin' saxophones on your song and be weird.’” Interestingly, the new album starts off with a saxophone! The sax, long has it been the symbol of “rock and roll,” from Little Richard to Bruce Springsteen to David Bowie. Why does the sax represent “rock” music? Well, I think that my musical introduction to the saxophone was through the band Fear. The saxophone was a derogatory instrument to punk. So, for Fucked Up, we would always take instruments that were derogatory to punk, like this, and we wrote songs with violins, the flute, the saxophone. I don’t know why- but I agree with you. I like the X-ray Spex a lot. That first X-ray Spex album was an influence on this album. [Drummer] Jonah [Falco]’s mom is a sax player which is why there are so many saxophones on the album. If Jonah’s mom as a French horn player, there would be a lot of French horn parts.

You mention that the sax was almost by chance, and that the sound of the album came together through happenstance, to a degree. Sometimes being loose with recording can lead to great places, but sometimes it can just make an album a mess. Dose Your Dreams came out great- how did you avoid getting sunk in a mess of random impules? Was it luck or planning? Well, we always use weird interments, and it’s maybe luck that we entered the studio at a time when we had nothing to lose and there wasn’t really any expectation for us. It was long enough passed the last tour and last record. This record wasn’t a “follow up” and this record wasn’t linked to the last one. We have been making records a long time and I hope it’s not just luck. We wanted to show off everything that we could do.

What do you mean by “we had nothing to lose?” After [our previous album] Glass Boys, as usual, when we end an album cycle things get a little dodgy and we don’t know what we are gonna do with our lives and we are not at the level were we can do an album cycle and take off two or three years. People have families and we didn’t know what we were going to do with the band. This album sounds to me like the sound of getting a second chance. I always wanna make as many possible records for Fucked Up as I can and go on tour as much a possible. I want to make as many records as I can over the next 20 to 30 years. The stakes were high in the sense that we knew that we had to put out a record that would make an impact and was a return to form, but it couldn’t sound like the records before it. It was like having a clean slate.

The album is centered on the concept of “Dreams .” Interestingly, David, the main character is trapped in a sort of world that he is unhappy with and doesn’t seem to have hope, at the beginning. But, it seems you are the opposite, seemingly having achieved at least some of your dreams. It’s dreams in that it just means hope. The dream of what you hope your life will end up like, what you can achieve, what you can do, justifying your own place in the world and what you can be- my life now is the dream of who I was when I was a kid. Then you wake up and it feels like you’re in a dream and you don’t have responsibilities. So, it is like living in a dream and it has been easy for me to forget that. I have the opportunity to exist in this weird way of living that is a blessing and a dream. Also, the words “dose you dreams” sound good together.

I once interviewed another artist who echoed something similar to that. He said that you go on tour, and come back, and all your friends are married, or have houses, or have kids, and you’re sort of who you were when you left, sort of like waking from a dream. You see people achieve things that you see people achieving on TV and movies. The world is set up to make you do certain things. I don’t have a lot of that in my life, so sometimes it’s a little bit of a struggle- did I make the right choice? Being in a band is a little bit of a gamble. It’s hard in a way and it’s also rewarding.

The precursor record to the album, the Highrise 7-inch said “Dreams Day - June 15, 2018.” Meanwhile, you all began the album on June 15, 2016. What is the significance of June 15? What does “Dreamsday” mean? Dreamsday is the day before a very significant date. Also, we just started recording on a specific date and the record came out two years to the day. I allude to the fact that the action of the album takes place on June 15…

In “House of Keys,” David and the Angel contemplate death. Mike, what do you think happens when people die? I hope what happens when you wake up into another reality and we learn what the true nature of existence is. That has some parallels to Hindu belief and Buddhist belief of passing into higher levels of consciousness. There’s also a part of that, however, that states that the universe doesn’t exist, and that we don’t exist, and that we are just a projection of something else.

I think the universe exists and that were experiencing it. I get the Buddhist thing where existence is suffering and all that stuff, but I don’t believe the souls purpose is to transcend and it would be a gamble to write off this mode of existence in hopes that it’s the precursor to something else. I think treating this existence like a back up would is mistake.

On David Comes to Life, the theme revolved around a love story. Again, we see a love story as one of the primary drives in this album. Mike, are you a lovey dovey kind of guy? I think that I’m a romantic person. I’m involved in a thing right now with someone that is special to me. With Fucked Up records, I don’t get personal, and as is sort of the trajectory of my life, every time I write an intense love record… David comes to Life was written after a breakup, and it wasn’t about someone I was with or anything like that. Then, I got with someone that was important to me, but then, I wasn’t with that person anymore and Dose Yor Dreams was not written about anyone. Then I got involved with someone afterwards.

Let’s talk about the distinctive look of Fucked Up records. You have a very strong sense of design that states an album is a Fucked Up album. Does marketing and creativity link together? I guess so. I think the weird thing about now is that design is so important to commerce because of social media, I think design is this pernicious thing. Design is used to make products feel like something more personal than they should be. Companies are using very good graphic design to sell things. Everything looks nice now and it’s a shame- This mischievous design where everything looks nice, but they are products and services, and they are close to people’s hearts. We always used design to make things look cool in people’s record collections. You know its Fucked Up and you see the bar… unlike a lot of marketing, we’re not trying to trick anyone into thinking it’s something else…