Catching up with Jeff Berman of Divided Heaven 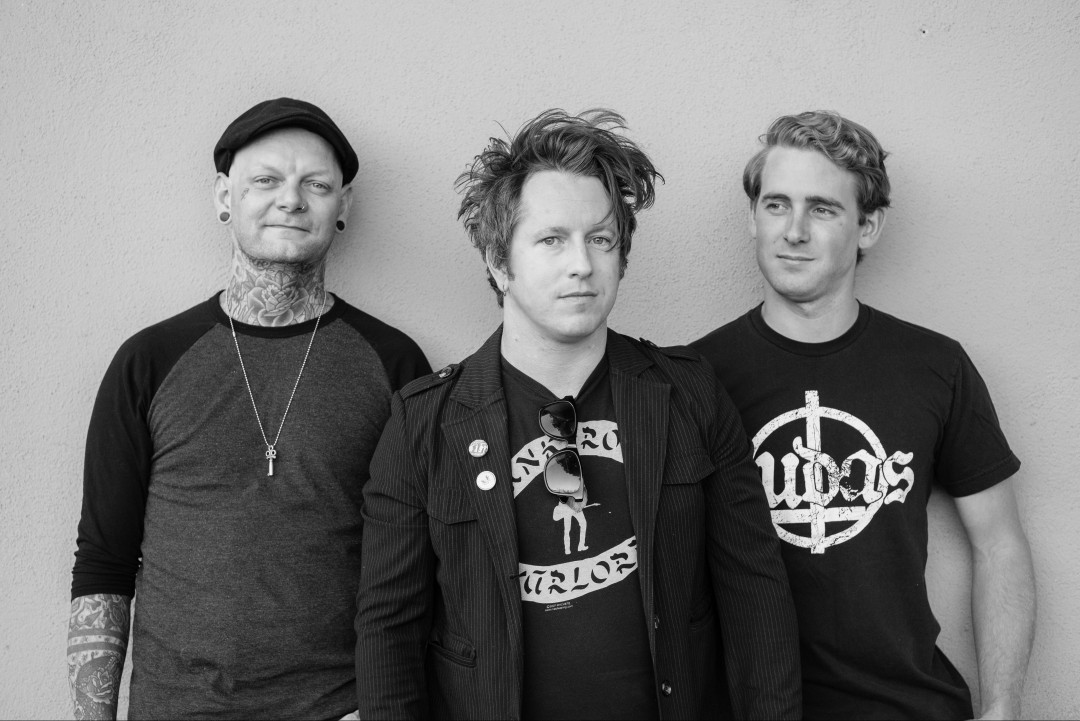 by Samantha Barrett Interviews 3 years ago

5 long years have gone and a lot has changed for Los Angeles based solo artist Divided Heaven. With the release of their newest effort Cold War and the addition of a bassist and drummer. Divided Heaven transformed themselves into a full fledging punk three piece, writing heartfelt songs with a punk edge. Editor Samantha Barrett sat down to chat with singer/guitarist Jeff Berman on the band, the new album, dreams and what they have been up to.

Here we are again.
It has been a little bit since we last spoke I think it has been 4-5 years?
It was right when Youngblood was just about to come out. Yeah, that might be around 4 and a half to about 5 years ago. Beginning of 2014, so yeah your right.

Seems like you picked up a few new members and rebranded from solo to a full band. How did that evolve?
Really out of necessity and out of desire. The desire, I didn't want to be touring solo as much as I had been. I wanted bandmates, I wanted Divided Heaven to be a full band. I put the work and the effort into making it happen. We had a few bass players before we landed on our bass player Derik Envy. I have been playing with my drummer Nic Morreale pretty much since 2014 in some capacity, he has been involved with version of Divided Heaven with the full band. The necessity, you kind of reach a certain point as a solo artist where you can’t really do as much beyond the same number of bills beyond the size that we are. We needed to revamp and revitalize the band and as cheesy as it sounds we kinda needed to revitalize the brand as well. I think we did a good job at it. It almost became synonymous, Divided Heaven did with as solo acoustic guy. It was a lot of hard work to break that mould but the best antidotes to use is really write good songs, play good shows and present ourselves well. So that is what we really aim to do.

When you started Divided Heaven, was that something you envisioned would branch out into being a full band?
No, I was somewhat delusional. That is how I look at it now. For a number of years, I thought Divided Heaven would be my solo endeavor and then I will have another band that will be my full band endeavor. I really didn't want to mix those waters and I worked really hard to keep those separate. Foolishly really for so long.
I was doing a band out here in Los Angeles called HeartRacers and we couldn’t get momentum because I was always on tour. The bass player of that band, my friend Ben and I, we had written a record, we had recorded a record, a HeartRacers record and because we could never tour on it we never wanted to put it out. We didn’t want it to be a soft release that just doesn’t go anywhere. We wanted to push it but we just kept on having to push it back to make room for what Divided Heaven was doing because that was what was keeping me on the road and keeping me busy so. It ultimately became this weird business decision that at a certain point I decided to put everything under the Divided Heaven umbrella, I should of always done that you know.
We released an EP last year called Pacific Avenue and those 6 songs were what we thought was the best 6 songs of what was originally a HeartRacers full length record. It is a little bit more Bouncing Souls, a little bit more straightforward punk rock and now it makes sense. I feel like when people look at or listen to the breath of Divided Heaven’s cannon of songs and records, it fits a little bit better. At the time I couldn’t see it, it seemed so different and so punk. It didn't fit and it didn't feel natural to me. It wasn't until we released the EP and the reception for it was much better than we could ever anticipate it. Then I realized it was the right decision and that I had been wrong and foolish for not putting it under the Divided Heaven umbrella earlier. And releasing it on some sort of format.

Since you guys have such an extensive catalogue as a solo artist. Are you guys working as a three piece in reimagining some of those older songs?< b>
We don’t really like to do that. There is a couple of songs off of the first album, A Rival City that we can break out if we need to for a show. “Keystone”, “Five And Dime to Hollywood” and “Born-Again Non-Believer” are the only three that only have stuck. We kinda leave that record to standalone to what it is, which is essentially a solo record. The songs off of Youngblood feels like a singer/songwriter with a backing band, that is essentially what it was so when we play some of those songs, it feels like we are playing new and different song because we are not playing them how it was recorded. With the new record, Cold War it is a full band record, there are parts in certain songs where it is very focused on me as the primary songwriter but I think that if people know my drummer and know my bassist they will hear them in these songs, at least I do. It is nice that our listeners pick up on that and it is nice for me to listen to that as well. I put the vinyl on the other day as I was just cleaning up, it was nice to just hear something that was not just all my ideas. It was a collective thing and that is much more important to me now and I think it is more important for my bandmates obviously as well. It feels really good especially while on tour to be playing these songs as opposed to my band members going on tour with me playing my songs. Cold War represents us when we play those songs it represents us. That is really important.

With Cold War you guys were working with Wiretap Records and Paper and Plastick. How is that going for you guys?
It is good. Labels are a tricky thing in 2018 and I think… I probably shouldn't say this but I am going to say it anyways. I think Vinny at Paper and Plastick probably likes me and my band and our work ethic. I think he likes working with people that are really driven and he sees that in us and he sees that in me so it is a good reciprocal relationship in that aspect. It is good that he is from one of my favorite bands for so long, it is good we are working with somebody that is always looking at ways to reinvent and be creative. It is inspiring to work with somebody like that, really. With Wiretap Records they are kinda like a “boutique label” out here in the Los Angeles area. They have done well and they have worked with a number of great bands but I think in the past couple of years he has signed bands that really aim to work hard. I would put us in that category, I would put Spanish Love Songs in that category even if they moved on to another label. I would put Get Married in that category too. A label that wants to take a chance on us giving us a morsel to work with and we really do everything we can to make that opportunity thrive not just for us as a band but for the label as well. I think between the bands on the label, there are a lot more homogeneous than I have seen bands on other labels. We did a record label showcase/anniversary party out here in Orange County and it was awesome. All of the bands were great but everybody was genuinely into everyone else’s band. There was a lot of mutual respect and a willingness to help each other out which I think in the reflection of Wiretap. I think that is really how Rob is.

My favorite song on the new album is “Love Letters to New York”, so tell me about that song?
I started having theses dreams I was either in New York City or either in Berlin, Germany and I used to live in both of those places. My dreams are typically frustrating because I am trying to accomplish something whether it is I am trying to make a phone call or I am trying to get to a show or I am trying to find a subway station. Whatever it is, it is usually a very menial task and and I unable to do it. In this pain in the ass of a dream, I always end up kinda noticed how much things have changed and the landscape in my purview, I started to really think about that. Everytime I went back to New York to play shows or visit friends and family I noticed just how much it has changed how much my old neighborhoods in Brooklyn or the Lower East Side. I started to notice that in New York, Los Angeles, Berlin, Chicago and D.C., they are living entities and I tried to write about that in the context about how they are indifferent towards the people living in them. We try, or at least I try to forge a relationship with a city. We see it in friends that have a LA tattoo or with people that we know in New York with the New York Yankees logo or the Mets logo tattooed on them. People are proud Angelinos and proud New Yorkers.
The song is really me coming to an understanding that the city is indifferent to me and my success. I am just a spoke on the wheel and the wheel will continue to turn after all of the blood sweat and tear and RENT that I put into being a New Yorker for that period of time, it doesn't mean anything. It is as if it never happened. That fleeting feeling of your heart sinking or your heartbreaking is what I tried to capture with that song. This is my love letter to New York, as I am having these dreams because I miss you and I want my time there to be worth something to you even though I know it can’t. It is unrequited.
There's something here let me chase down this feeling. If this ends up being poetic than that works, great. If it doesn't then it will just be a diary entry.

I love this song because it makes sense to me. I still live here and even with me living here everything is changing and me living here does not matter.
How was the reception of the new album?
It has been great. This has been better than I anticipated. Best reaction we have ever got from anything we have ever done. And it feels good, it feels very powerful and it is humbling that people have been into this record as they have been.

You guys toured the entire US to promote this new release. How was tour?
The tour was great, it was long. We did almost 50 shows but I think that is how we like it. Yeah It was over 50 shows booked, done DIY. Only had 2 days off, that is pretty good. It was a great tour.

Check out the new track by Living Room!