Witchrot decides not to break up 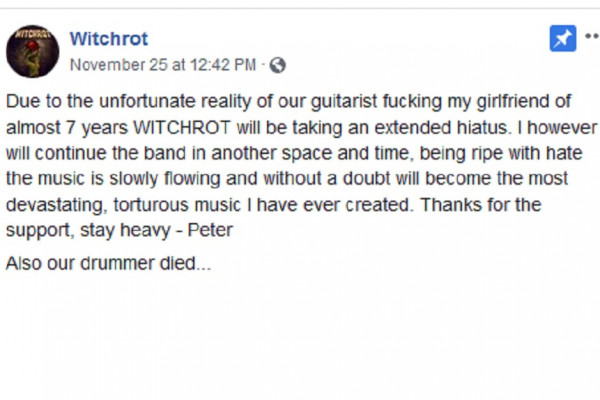 A couple of weeks ago, Witchrot announced that they were breaking up via a unique facebook post. Bassist Peter Turik stated: ""Due to the unfortunate reality of our guitarist fucking my girlfriend of almost 7 years WITCHROT will be taking an extended hiatus. I however will continue the band in another space and time, being ripe with hate the music is slowly flowing and without a doubt will become the most devastating, torturous music I have ever created. Thanks for the support, stay heavy - Peter Also our drummer died…"

Well, the band has actually decided to move forward. As it turns out, the drummer is not dead, and that portion was a joke added at the suggestion of the drummer himself. However, the guitarist did in fact have "relations" with Turik's now ex-girlfriend. However, now, Turik, along with the drummer and singer Lea, have decided to forge on, sans guitarist. The band was recently in the studio recording new material and are already booking new live dates.

Tours: Pinegrove (UK and US)