Stephanie of the Coathangers on the new album, the NRA, and death 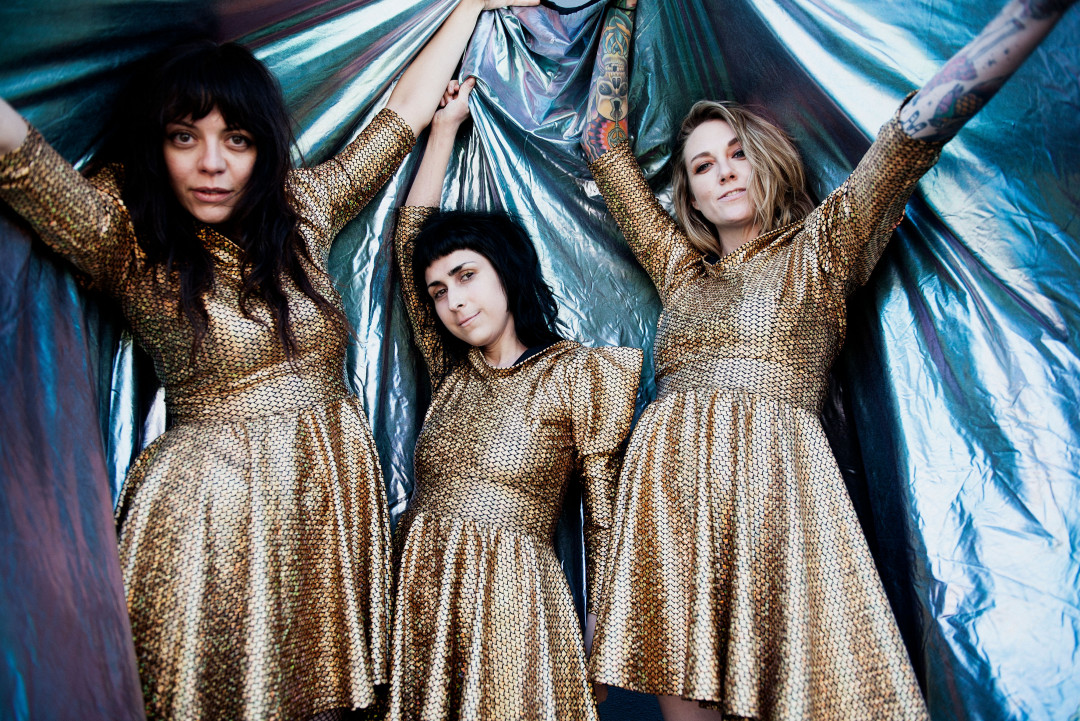 The trio, which also includes Julia Kugel on guitar and Meredith Franco on bass, just released their sixth album, The Devil You Know.The album finds the band refining their sound even further back into a clean spartan strike that's crisp like The Cars and huge like Gang of Four. Perhaps most surprisingly, a certain darkness and anger dwells in the album's recesses: "Step Back" has a sinister shift and ghoulish howls. "5 Farms" confronts death itself. "F the NRA" is about how whacked out the NRA is.

Because the album finds the group snatching up all manners of devils and sawing off their horns, Punknews' John Gentile spoke to Luke about the new LP, the gun lobby, and the human condition itself. Check it out below.

I like this album a lot, but I was very surprised by it. Both of your last releases, Nosebleed Weekend and Parasite were really good, so I thought this album would essentially be, “We’re the best! We’re the best!” But, I got this album, and to me, it has sort of a persistent darkness! Would you agree with that assessment or am I reading this album incorrectly? No, I wouldn’t say you’re reading it incorrectly. There’s a little bit of darkness to it. But, there is also a lightness as well. We’re doing what we’ve always done which is talking about things and situations that are happening in our own lives. And now, with the political climate, we touched on that, and now, unfortunately, we are living in some dark times, so…

The album has you three with haloes on the cover. A halo suggests someone without any badness in him or her. Humans, are they inherently good, inherently bad, or do they go wherever the wind blows them? Oh goodness! I’d like to think that people are born good and maybe society creates its own little monsters. But, maybe some people are born evil. But, who’s to say?

”F the NRA” is one of your most outspoken tracks ever and it attacks a very powerful lobbying group. Have you gotten any negative blowback? We’ve actually gotten a lot of positive feedback. At first, everyone was a little nervous to include it on the record but we… stuck to our guns… and we put it on there because if we can’t say what we want to say, then we are not doing our bands or ourselves justice. We have gotten positive response. We have gotten some… well, not everyone is going to agree with you, that’s just life. But, for the sot part, we have gotten a lot of people who were like, “thank you for writing this song. It means a lot to me, I’m a survivor of a school shooting or a mass shooting.” So, that means a lot to me, personally.

With these NRA guys, should they just be wiped out and defeated, as it were, or do you think it’s more beneficial, or perhaps necessary, to engage in a conversation rather than direct opposition? Or maybe direct opposition is what is required in 2019? I think it should always be a conversation because otherwise we are not better than the bad guys. Here should always be a meeting ground. But as far as the NRA as a corporation, there are no repercussions or regulations on things that should be regulated. It’s out of control. It’s a corporation that has its hands in the government and it is shady as hell.

It seems to me that the stereotype is that the south is more gun friendly than say, the North East. The Coathangers are from Georgia. What’s your personal stance? Should people have no guns? Maybe handguns but no machineguns? My personal stance is that if people want to own a handgun, that’s their right. But, at the same time, I don’t think a person needs to own an assault rifle and therein lies the problem. Where do you cut it off? I was raised in the South as you were saying, and when we would go to summer camp we should guns. We would do skeet shooting at my Dad’s farm. I was raised around guns. Knowing the power you harbor when you wield a gun- people need to be a little bit more serious understanding the power you have when you have an assault weapon like that. It is different in the south, but it is a problem everywhere. It’s a hard conversation to be had with other people, because I don’t want to tell people what they can cannot do, but it boils down to common sense. How many weapons do you really need?

The general perception with bands is that the person singing is the person that wrote the lyrics. Is that true with the Coathangers? I’d say that’s 75% accurate, and the person who wrote it usually sings it. But, we do come together for the chorus or help the person that sings.

So that brings us to this: you sometimes write lyrics for each other. But, I get the impression that the Coathangers are all pals. The Ramones hated each other. Black Flag didn’t really get along. But, I get the impression that you all are sort of a gang and you’re all pals. We are a gang. It’s difficult to be in a band. You’re constantly around each other, you’re driving, you’re not eating right, you’re not sleeping right, if at all, while you’re on the road. It’s a meeting of the minds creatively, personally, and psychologically, but I think we’ve weathered it very well. We’ve always been honest with each other. If someone’s having a problem with the other, we’re just really honest with each other, and that’s enabled us to maintain our friendship and maintain our girl gang.

Each of the Coathangers is a very unique person and each brings a different element to the band. Stephanie Luke, she’s got the soulful voice. When I hear you sing, I think of Etta James, Ella Fitzgerald, all of these amazing soul singers. What do you think you bring to the band? Ha ha ha! Oh goodness, well, I’m the drummer… I think we each have our own little unique style and that’s what makes the Coathangers the Coathangers. If we were all the same, it would be a completely different band.

What do you think you bring to the band? I would hope I bring… I don’t know! That’s a hard question!

Ok, then what do Julia and Meredith bring to the group? I think Julia brings a lot of the creativity, the guitar riffs she comes u with, she brings this artistry to it that’s all her own- this strength. Meredith is a badass. She plays bass unlike anyone I’ve ever seen before. they are both amazing musicians and are unique in their style in the way they play. Maybe, that’s because we were in the band while we learned how to play.

Several times throughout the album we contemplate death. What’s death to you? The sweet final release? The horrific void? And how often do you think about it? Unfortunately, I think about it a lot! I think it’s just the end, the end of things. I would love to believe that there’s something afterward. I believe in energy transfer. I hope my energy goes into something kind and something good. Death is all around us at all times and unfortunately we lost a lot of friends and family, especially being in rock and roll. But, I’m not scared of it. If it happens, it happens. I’m at that point. When I used to get on a plane, I’d be terrified. I’d freak out, “what if the pane goes down!” Now, it’ll be just how it happens. You can’t control death or life!

The Devil You Know. What kinds of devils are out there? Well, like Julia says, there are devils in everything. there are devils in people There’s devils in things. The devil can your phone, your tv, your politician, your government, your dad, your mom, you ex-boyfriend. Here’s constant good and evil around us. The devil you know might be different than the devil I know, but everyone knows the devil in some way.

New Review Update: Aaron Alt of Have Mercy passes away