Teenage Bottlerocket's Ray Carlisle on how to stay rad 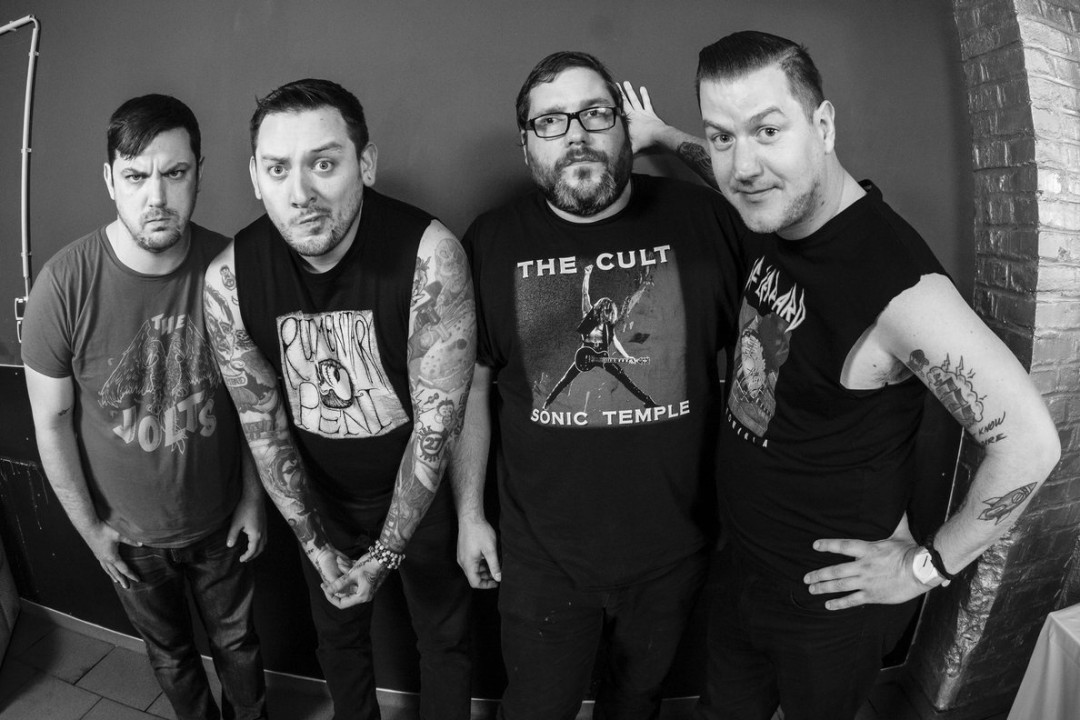 Teenage Bottlerocket has always been about positivity. So much so, that “rad” has become synonymous with the band because it pops up so much in the band’s lexicon, becoming a common theme in the music. It has definitely become singer and guitarist Ray Carlisle’s philosophy - a guide through tough times in life, especially recently when he his twin brother and former drummer, Brandon, tragically passed away in 2015.

Out today, the aptly titled Stay Rad! is a, um, a rad mix of silly and sentimental, with a little more sentimental as this is the first full length since Brandon’s passing. Surprisingly, you romantics won’t find has many songs about girls and relationships like past releases. Instead you have more mature (Gasp!) songs about fatherhood, the perils of social media and killing their long-time merch person.

Punknews writer Gen Handley spoke to Ray on his lunch break to talk about what it was like to make the new album, if they care about evolving or not, and how they have managed to keep politics out of their songs for nearly 20 years.

You probably get asked this a lot but what inspired these songs? Love? Drugs?

Well, there’s only one song about a girl on this record which is a little unorthodox for a Teenage Bottlerocket record. And Miguel (Chen, bassist) wrote that song because probably he was recently married and wrote it for his wife. A lot of other things inspired the record – Black Metal, taking LSD, detest towards the internet and things of that nature (Laughs)

Yeah he has. He had some big shoes to fill. We’re never going to be able to replace Brandon but there’s only one Chewka (Darren, drummer) as well. We’re really happy with the way things are going with Darren and the way his drum tracks turned out on the new record. But most of all, he’s really fun to hang out with – it would suck to have somebody be in your band and they turn out to be shithead or something – Darren is a good hang.

As far as filling Brandon’s shoes, I’m sure Darren felt some pressure because Brandon was one of the best drummers ever and had a very unique style. So after four years of being in the band, Darren has been able to implement his own style into the music. It’s been going good and it’s also been an experience.

What do you mean that it’s been an experience?

Well, we miss Brandon of course and he was a big player in the band as far as being a producer on the records and with songwriting. So this is the first big set of original songs we recorded without Brandon. Because of that, we all stepped up our game and became involved with those areas he used to take care of. We would keep Brandon in our thoughts as far as, “Would he like this?” or “What would Brandon say?” At the end of the day, I think he would really be happy with the way the record turned out.

Since 2003, the band hasn't changed its sound much over the years. Do you feel any pressure to evolve or release something different?

Well, we’ve never been afraid to write songs that are a little different from the staple Teenage Bottlerocket sound – we’ve always had one or two weird ones on each record. To a certain degree, that will get any crazy bug out of our system to do something different. But if we come up with the idea of doing a New Wave record, it usually revolves around a lot of alcohol. (Laughs) The songs we write and the music we record are the style of music we love. First and foremost, if you don’t love your songs then what the fuck is the point? That is why a lot of these records turn out similar, I guess.

How has the band managed to stay so youthful into adulthood and parenthood?

We just good at faking it. (Laughs) The band has always been this weird Fountain of Youth for us. Like, you guys have 45 minutes before Pennywise goes on stage, what are you going to do with it? We feel the electricity pulsating through us before a live performance. We take that to the stage and become hyperactive idiots. (Laughs) The songs have this youthful energy and we’ll always love the energetic Ramones style. That has a lot to do with why we sound like we’re still 20 when we’re 40. (Laughs)

How tight is the band? You seem really close to each other.

Yeah, we are really close. Darren is up in Edmonton, Alberta, I’m in Laramie, Miguel is in Dallas and Kody (Templeman, vocalist and guitarist) lives in Denver. So geographical boundaries limit us to how much we can hang. When we get together to shred, we take advantage of that – we act like little kids. That energy is what we bring to the stage.

Given the crazy political climate in the US right now, how do you and the band manage to avoid letting those issues affect the songs?

We’ve really stayed away from politics this whole time. This is our eighth record and we’ve had the band since 2001, and that’s never really been our vibe. We’ve always had a sense of humor with our music. There’s a lot of bands out there that are actively involved with politics who would prefer you to eat a certain type of food. We’re not out there to try to change anybody’s minds – we’re not trying to convert anybody to think a certain way. Our band’s more about having fun and throwing a party.

But we’re not perfect either. I remember once, Kody and I sort of bragging about having abortions on stage, which we found humorous. But Brandon was like, “You guys should shut the fuck up about that because you’re excluding somebody if they don’t believe that.” Our music’s for everybody. There are certain exceptions – we wouldn’t want Nazis showing up at our shows with swastikas on their shirts. (Laughs) But yeah, we’ve never really been involved politically.

With America’s political climate, it’s definitely embarrassing who our president is. But our music is an escape from all that. You get this shit crammed down your throat all fucking day and I want our music to stand for something else.

Do you think that your song "Everything to Me" could kickstart a dad punk scene? Dadcore?

(Laughs) I think the dad punk scene was already kickstarted years ago. You know what started it?

Sex. (Laughs) It’s funny…a lot of parents have embraced this song and a couple of people here and there, who aren’t parents, told me, “I love this song – thank you for writing it.” I also had someone say, “I heard your song and there’s a line about being 40 years old and you’re in junior high and it was the creepiest fucking song I’ve heard in my life.” (Laughs)

But yeah, punk rock’s been around a long time and people have certainly reproduced…possibly while they were listening to punk rock. Dadcore’s been around and we’ve just maybe made it a little stronger. (Laughs)

So this is my last question and it’s a very important one. How does one stay rad?