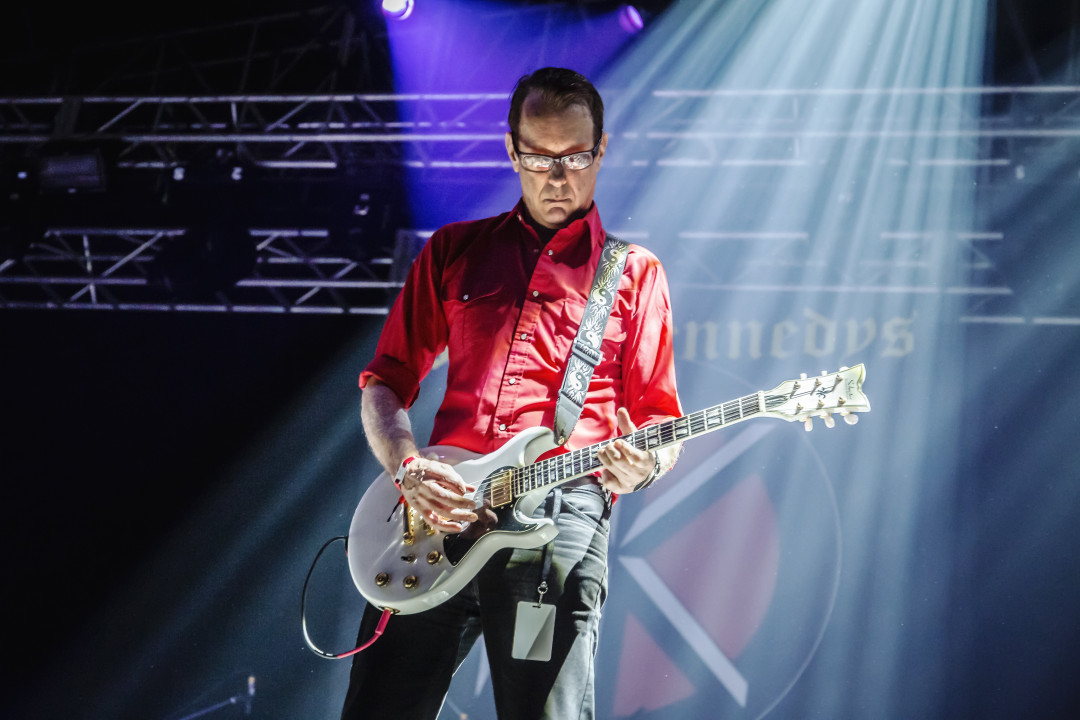 Those whirling, tumbling, whipping riffs that are charged by spaghetti westerns, surf rock, and psychedelic garage in equal parts- that's the sound of East Bay Ray, guitarist and founding member of Dead Kennedys. Through his reverent-meets-irreverence style, the man helped formed the skeleton of hardcore punk and shattered that structure in what seemed like a singular strike. As far as punk guitarists go (and guitarists in general), this guy is heavy duty.

Perhaps as a way to show that punk is an ever changing animal, Ray has dug through the DK archives and found three complete, unreleased live shows, which represent the Kennedys in different phases. Included in the set (out April 26 on Manifesto Records), is the famed Skateboard Party live show which exhibits the band at their most crazed, during the Plastic Surgery Disasters era. Yet, just as they mastered hardcore, they broke away from it and on the third disc, The Farm, the band is recorded during their more complex Frankenchrist era, which has almost no live documentation.

Now that the set is about to be released, Punknews' John Gentile spoke to Ray about the live shows, his history, and how to make a good set list.

Over the years, people have sent me cassette tapes and then digital files- I have a box of about 30 or so. I went through them all and these popped out. They’re good performances and they’re good recordings. The reason these three were good was because they were radio broadcasts. The other ones are mostly off the board, so it’s basically only a voice or just the audience and a lot of noise.

Is there more material in the vault? Oh, there is probably two or three other lives shows. Just the recording quality isn’t as good. We may put them out eventually- more as a collector’s thing. I understand Bob Dylan is going to release everything he’s ever done on his website so…

Ray, you were born in Oakland, right? That’s correct. But, I grew up in a Suburb about 20 minutes south. My dad worked in Oakland and when my brother and I got older we would go into town and go to the record stores and pawn shops that aren’t there any more. There was a pool cue shop, that was used in The Hustler, and there was Leo’s music, which was a big music store. When went to a place that had all the Curtis Mayfield type fashions from back on the day.

What did your parents do? My dad was a white collar at Kaiser aluminum and my mom became a librarian. But, my Dad was an artist and he had a workshop behind the house. He would make sculptures and he made two independent films. He used to, with 5 or 6 families in the neighborhood, they would put on art shows in the backyards.

My parents were very politically active in the ‘60s and they worked against red-lining. That’s where insurance companies and mortgage companies would charge more in certain neighborhoods. It was discrimination under it. Black families were getting charged more and they fought against that.

The influence they had on me- my dad was into delta blues and Duke Ellington and Count Basie. He took my brother and I to see Lighting Hopkins when we were little. I didn’t quite know what I was seeing, but I still remember the concert. He was from the depression era and he was still playing then.

Now, you saw the Rolling Stones early on, too, right? A friend of mine, my brother and I, talked our dad into seeing the Rolling Stones. It would have been late ‘60s, early ‘70s. All I can remember is the energy. It was very exciting and inspired us to get guitar lessons.

You were also influenced by Pink Floyd’s Piper at the gates of Dawn, correct? I was not into the music of the day. I’m not a big heavy metal fan. I was going to college and listening to music. Piper at the Gates of Dawn was a big one. Jimi Hendrix, too, and the Beatles and the Stones. There were older kids, before college, there were older kids in the neighborhood that were listening to that stuff. Where I grew up, one of the horn players of Tower of Power grew up in my town.

I believe that The Weirdoes was one of the first punk shows that you saw. It was in San Francisco at the Fab Mab. I remember the little hairs on the back of my neck stood on end and that’s when I decided what I want to do, and that led to me starting a punk band.

DH’s mom introduces the band on the third disc. So, were all your parents supportive on the Dead Kennedys? My parents were supportive, they paid for my guitar lessons when I was little. I had an older brother and an older sister who were required to learn instruments. My sister was good at it, but my older brother was not. He played the clarinet, but the rumor was he would deliberately play off note, which puts your teeth on edge like nails on the chalkboard. So, for me, they didn’t force any musical lessons on me. So, when I asked for lessons, they were more than happy to do it. My father, when he was a kid, he used to sneak into the back of the clubs to see Count Basie and Duke Ellington. In those days, it was strict segregation, but because he was a teenager, he was “adopted as a pet.”

What do you remember from recording the Skateboard Party show? It was a big hall in Germany. It was a radio broadcast on the state owned station. I think they taped the soundcheck and I went up to the booth to check it out, and then we fine tuned the mix for the show. Punk rock is not easy to mix! It’s all aggression and mid range. The snare, the voice, and the guitar are all right in the middle and aggressive, so it’s difficult to mix them!

The Farm album is really interesting album because it’s from the Frankenchrist era, which is barely documented from the live standpoint. At that time, the band was really evolving from the hardcore period. Was that a conscious decision? To my mind, we did Fresh Fruit and then In God we Trust, which was more hardcore, and then Plastic Surgery which added psychedelic elements. We do variety. We didn’t have a pattern. We always went around to several different styles. I always asked, are we recording well? Are we playing well? The setlists were always different. We wanted to have ones that people expected and some that we thought were fun and were interesting to play.

With setlists, one philosophy is that “we do the same setlist every night because we want these songs to be heard in this particular order.” The other idea is “we do different setlists every night to keep things fresh.” Do you have a preference? I look at the setlist as an art. You start out strong and then mellow out a little n the middle- not that we played mellow- there’s a difference between “Moon over Marin” and “Nazi Punks Fuck Off”- and then bring it up. I’ve seen bands that do a different set every night, but there’s a lot of dead air. For a record, we would sequence songs, and you had to think about how the songs were presented. We kind of find an arc and there are different songs that fill the same functions within the arc and swap some out. Bands that do a different setlist every night could be doing two more songs instead of standing around and talking to each other. Or, it’s like a bad DJ putting songs in a random order. It doesn’t order. Some people might not understand the arc part. You don’t have to do the same songs, but you need that same energy.

The stereotype is that around the time of The Farm show, hardcore was becoming codified and a lot of the first wave hardcore bands, were either getting caught into one specific style, or fighting against conformity of sound and thought. Black Flag particularly expressed this frustration. As the Dead Kennedys evolved into the longer, more complex numbers, did you face any of that sort of blowback? Uh… no! Not really! The Farm show, the audience loved it. One of the things that we did notice, was that we did book a tour and Plastic Surgery was delayed in being released. We started out with Plastic Surgery on the set, and people were sort of just staring at us. So, we went back to Fresh Fruit. Then, we brought it back when Plastic Surgery came out. I think its’ more of people needing to hear the song on record, first, especially, when it’s different, so they can get adjusted to it and change their expectations and change how they actually hear.

People pay money to go to a show and you don’t want them to be mad and annoyed at the concert. Maybe mad and annoyed at various governmental issues or society issues, that’s what we want! I’ve been to a lot of great shows with some great stars… and it’s uh… I won’t name any names….

Ray, I’m a big fan of yours. I really liked the East Bay Ray and the Killer Smiles record. But, I’m also a big fan of Jello! I know you guys don’t get along, so as I fan what should I do, because I like both camps!

Well, most people don’t know what happened. Basically, Alternative Tentacles skimmed 76,000 dollars from us. But also Biafra is a very big media person. He has a lot of media power. So, people can’t believe that happened. But, he’s human. But, it doesn’t matter. The Beatles sued one another. The Beach Boys sued another. Who cares! It’s about the music.

There are trolls on the Internet and they talk about how Klaus, DH, and I didn’t write any of the songs. That’s big, big, big bullshit. They don’t know what they’re talking about. Danzig, after Misfits, went on to a solo career. Lou Reed after Velvet Underground. Iggy was in the Stooges and went on to a solo career. Morrissey from the Smiths. It’s obvious in Dead Kennedys things that the songs were written as a collective.

Still, you would agree that all of the Dead Kennedys- you, Klaus, DH, and Biafra- that you’re all very talented people, correct? Oh yeah. Biafra is very talented. Just, he’s a little difficult to deal with.

Any last comments? The Killer Smiles is due to be re-released this year through Die Laughing Records. So, be on the Look out for that!