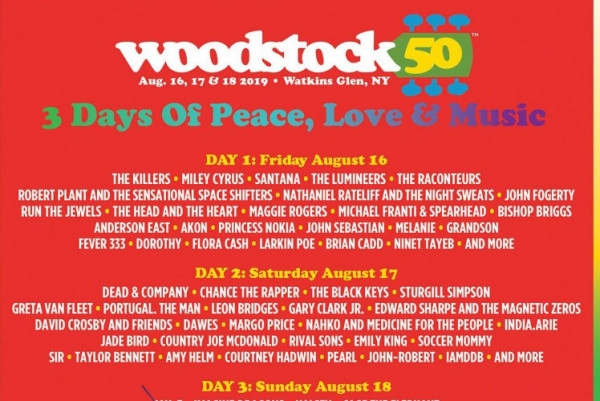 After announcing Killers, Jay-Z, Miley Cyrus, Dead & Co as headliners for Woodstock 50, and after releasing a wide range of merchandise including $65 hoodies, $15 koozies, and an $18 thing called a "Woodstock psychedelic tube," it appears that not all is peace and love in the Woodstock camp (or more precisely the Woodstock Ventures LC camp).

They're facing delays and early online tickets did not go up for sale as expected (and to boot, prices haven't even been announced yet). Apparently, Woodstock Ventures LC still has not been granted the proper permit to hold such a mass event and a permit application was only filed last week. As Pitchfork reported, Tim O’Hearn, administrator of Schuyler County stated “The health department is reviewing to determine if a conditional permit may be issued that would allow for ticket sales to commence. At this point there is no on-sale date set.”

Recently, Black Lips pulled out of the event due to "scheduling conflicts." Meanwhile, Michael Lang, co-owner of Woodstock Ventures, said in a statement to Billboard, that Woodstock 50 will not be canceled, calling fears of cancellation “rumors.”