Listen to the new single by UK's Tape It Shut! 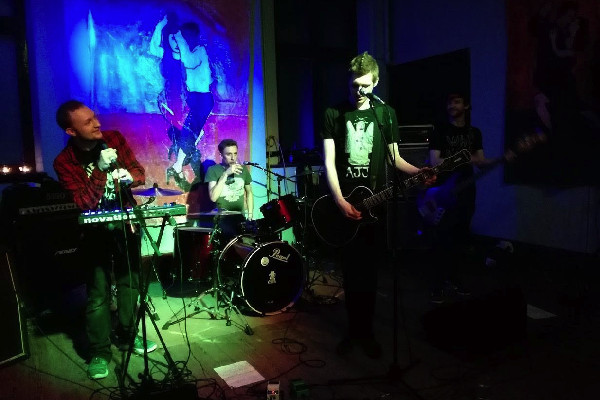 Punknews is excited to premiere a new single from UK act Tape It Shut. The track, "Self Deprecating Humour," is off of the band's upcoming Dinosaurs VS Robots EP, which is due out May 4th. The song is unabashedly English punk in its delivery, and very reminiscent of Dick Lucas' acts SUBHUMANS UK and Citizen Fish.

This track is about wallowing in the old habits I spotted in my own mental health. I used to identify a problem then just wear it on my sleeve, bringing it up as a "oh that's just me!" sort of joke when talking to friends. What I should have been doing was addressing the problems and then moving on. Things like procrastination, self hatred and holding on to my mistakes became a part of my long term personality. So I wrote this as a song to remind myself there are better ways of dealing with my mental health than making jokes about it and the problems I might have don't have to define me.

With the alternatig vocals and tempo being thrown by the jarring stop/start rhythm, "Self Deprecating Humour" definitely delivers in style as well as intent.

Dinosaurs VS Robots is available for pre-order here and, at 7 songs long, is quite a steal. The band will also be playing a launch party on the day of release with some of my favorite (or should I write favourite?) UK-based acts, including Triple Sundae, Müg, Launch Control, and more. You can check out the new track (lyrics available if you click through to Bandcamp) and the details of that launch gig, below.

Streams: Line-up announced for Stoked for The Summer