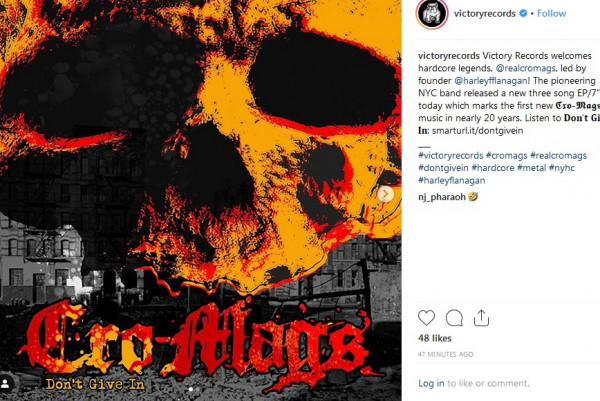 Cro-Mags, which are now headed by Harley Flanagan, have released a surprise new 3-song EP. The band features Flanagan on lead vocals/bass, guitarists Gabby Abularach, Rocky George (Suicidal Tendencies, Fishbone), and drummer Garry "G-Man" Sullivan. (John Joseph and Mackie Jayson are now in "Cro-Mags JM"). This is the first new Cro-Mags music in over 20 years. The release is called Don't Give In. It's out now via Victory Records. Harley has previously stated that the band is working on a full album. Hear the new songs below.

As a note to our readers, after July, we'll refer to Harley Flanagan's Cro-Mags simply as Cro-Mags and John Joseph's group as Cro-Mags JM, without the explanatory comments.

Videos: Much The Same release new single "You Used to Have a Garden"