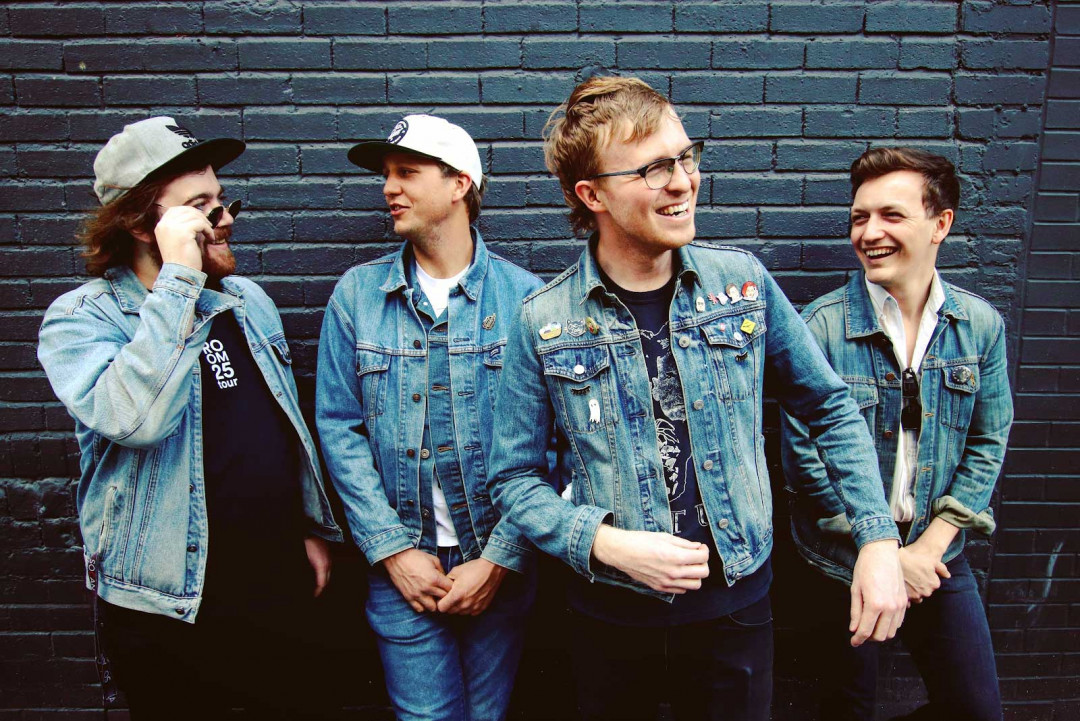 by Adam White Interviews 50 weeks ago

Earlier this year the melodic Toronto punk quartet Stuck Out Here released their long-awaited third LP, Until We’re Each Someone Else. Arriving from Get Party! and Must Be Nice Records, the record found a band grappling with personal tragedy, mental health stigma, and relationships torn apart. Writer Graham Isador spoke to the band about the difficult road to this album, and where it takes the band from here.

Just before I was about to meet Stuck Out Here I got a series of texts from guitarist/vocalist Cam Laurie. His co-frontman Ivan Raczycki had recently been hospitalized after a bout of mania. Laurie explained that his friend lives with bipolar 1 disorder. For the past few years he's navigated extended periods of psychosis. It's put a lot of stress on Raczycki's personal life, his art, and his ability to provide for himself. The band was still down to do the interview—things should be fine—but in the interest of transparency Laurie felt I should know. When I asked how Laurie was personally dealing with the situation, he was hopeful but pragmatic.

"I mean it was super challenging, but nothing compared to what Ivan has had to go through learning how to handle his illness," he said. "It's never easy to know what to do or how to help. I think everyone in this band has just tried to show we're here for one another."

I clocked how the hospitalization would have been difficult for both Raczycki' and his band, but didn't really think much of it. My plan with the interview and photoshoot was to have Stuck Out Here walk me through their new album. Until We're Each Someone Else is a punk record about living on the outskirts of big city Toronto, how harsh economic conditions can stunt adulthood, and the painful toll of unrequited love. The tracks are melodic and catchy with an emphasis on gang vocals and sing-along choruses. While mental health and overt references to mania are certainly present on the record, that wasn't the narrative I wanted to focus on. When I got into the band interview I quickly realized it wasn't something I'd be able to avoid.

Chatting with Laurie and Raczycki the bandmates were affable, but each time I asked a question the answer would end up steering back towards Raczycki mental health. A question about the album's cover—a photo of demolished Toronto discount store Honest Ed's —lead to a story about a manic episode where the singer thought he was in charge of implementing the rapture. When I asked about the lag time between this release and the last one, Raczycki let me know about how a former partner he had met during a bout of psychosis was recently murdered. We touched on issues of gender dysphoria, the death of his parents, and the role of medication. During the talk Laurie was supportive of his friend and bandmate, while at the same time trying to steer the conversation back towards the music. It was a lot to take in given the context of the interview was chatting about punk songs, but it was clear that for Raczycki expressing the headspace he lives and creates from was important.

"I'm grateful for my art as a therapeutic tool to sort through my hallucinations," said Raczycki. "Not everybody with intense psychoactive experiences can come out the other side with their mind intact and not be too traumatized to sing about it…hopefully [I can] relay a message of hope that it is safe to talk about these experiences. You shouldn't feel ashamed to express yourself fully with your art, no matter how intense, triggering, or scary it can be."

When we talk about mental health issues we often try to categorize them into a digestible form: a quirky trait used to accentuate a stable personality, like pairing off-kilter sneakers with a business suit. But even when the illness is under control, dealing with it is rarely that clean cut. Listening to the album again with the context of the interview there was a lot more depth to the punk sound than I had initially realized. Lyrics like I thought I was god on the track "Saint and Sinners Wine" or the torrid romance described on "Bore Me" moved beyond metaphor and into storytelling. The implications of that were a lot bigger than just another poetic turn of phrase or a spun yarn. After many more listens I realized Until We're Each Someone Else was a hard nosed and brutally honest look at the realities of living with mental illness, using catchy melodies as a means of communicating difficult truths, amongst the backdrop of a typical punk form.

For a long time in the Southern Ontario Music scene there was a joke about how long Stuck Out Here took to release new material. While contemporaries in Pup and Pkew Pkew Pkew raised in profile earning media attention and spots on late-night programs, the band stayed stagnant in the house show and bar circuit. What I don't think many of us realized is that a major reason Stuck Out Here hadn't been able to put out new music was that Raczycki had to deal with his mental health first. The record sees him deal with his realities head on with the support of his friends, even if it took a long time to get there. That's not the narrative anyone had been expecting, but it's the honest take Stuck Out Here are pushing forward with.

These quotes have been edited for length and clarity.
Graham Isador is a writer and photographer @presgang
Stuck Out here is on twitter @Stuck_out_here

Wayne Barrett McGrath fires other members of Slaughter and the Dogs