The Path's Jon Berg on the band's new album 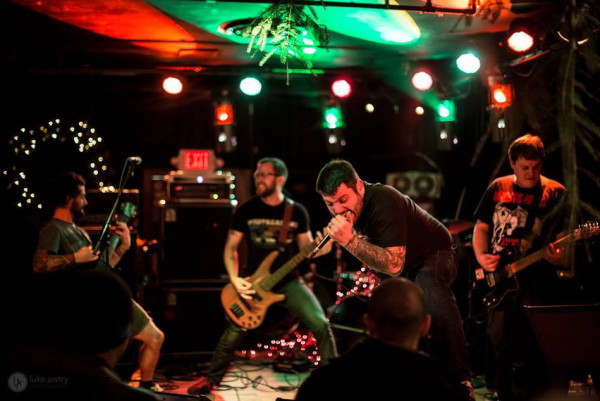 by John Gentile Interviews 32 weeks ago

The Path are a shot in the arm to the hardcore punk genre. Adhering closely to a DIY ethos, the Vermont band are at once harkening back to the chaotic assault of Nausea and Black Flag, and modernizing the sound with their own style. With the release of the first full-length, Chaotic Good, on State of Mind Recordings, The Path are primed to bring their highly personal and sociopolitical sound to a wide range of listeners. Punknews' Mike Musilli caught up with frontperson Jon Berg to talk the band, Vermont hardcore, his Long Island roots, and new the record.

How did The Path come together? It might be Justin Gonyea’s fault (Doom Service, Screaming Skull, Pokemon). He is a close friend of ours who was actively booking at 242 Main which was a historic all ages venue in Burlington. Matt and I were volunteers before Matt took over as the booking manager. Kris was his former roommate and I think everyone knew Liam but me. I wasn’t looking to start a band but Matt was focused on making it happen. He has an infectious energy that makes you want to do stuff. When we started we only wanted to hang out, write a record and maybe play a show or two. It ended up being a 4 years (and counting). It’s scratched the itch of writing hardcore songs in a basement with your buddies while giving us opportunities to meet new friends and reconnect with the DIY community.

Most of the songs on your record, Chaotic Good, clock in at under two minutes in length. Is this brevity a conscious part of the band’s songwriting? We all come from different backgrounds and bring different influences but short, fast and loud has always been the baseline. We aren’t here to waste your time and hopefully we can keep your attention if it doesn’t get boring. Matt and Andrew are also in a doom band called Sachem so if you’re looking to slow down I would look in that direction.

The entire record has very discordant and frenzied tone to it. How does the writing process unfold for The Path? Writing songs is usually a collaboration. One person brings a riff or and idea that they’ve been working on and they push it through the machine. The rest of us add/remove/adjust until we get the song to where it makes sense to us. Since I don’t play any instruments I usually just say “play that… but faster” or “yeah… but way crazier”. They have a lot of patience with me and I acknowledge and appreciate it.

The lyrical content on the record seems antagonistic, socio-political in nature, and somewhat interpretative. “Retail Therapy” and “Red Emma” come to mind here. What did you tend to focus on either thematically or personally in writing the lyrics for this record? I was talking to a person at a show a few months back and they asked if we were a “political” band and I said “no”. But then I started thinking about that question a lot. I never saw The Path as a political band because it’s always been about processing what’s going on in my mind and in the world. Unfortunately, the world we live in is a complete horror show on a daily basis and the machine we’ve created is out of control. The reality is that politics are personal, capitalism is whack and the byproducts of capitalism are killing us.

The record also uses a lot of movie samples. What is the motivation behind so much accompaniment to the music itself? Bands that use samples are cooler. Milhouse taught me that when I was a kid! There is no denying when you put on Obscenity In the Milk and hear: “this is a new time.. a precise time” your eyes widen, your pupils dilate and you are ready to go. It sets the tone for the song in a way that couldn’t have been achieved without the clip.

How did the relationship with State of Mind Recordings come together? Does this go back to your days in New York? I’ve always approached my bands and band relationships with DIY ethics. I’m all about a hug and a handshake agreement and if you need a contract then you need a better relationship. This is why I was 100% confident and comfortable collaborating with State of Mind. Dave is zero bullshit and he loves DIY hardcore. I’ve known Dave since Contra started. He ran a label with Jeff Cunningham (Bridge and Tunnel, Freezing Cold, Headliners) called Take a Leak Records and they “put out” the Contra demo when they were in 9th or 10th grade. I’ve watched him build his label and distro for almost 20 years. He’s consistently prioritizes his love of building relationships and sharing music over financial gain. Hug and a handshake, no bullshit, how punk should be.

Vermont isn’t necessarily considered at the forefront of the punk or hardcore underground. What is the scene like in the area? The Vermont scene is very disjointed at this time but there is a flame still burning in these mountains! When 242 Main closed in December 2016 it was the end of an era. It was one of the very few places that would allow all ages shows and it was community run. There have been a few houses that have taken the responsibility (big shout out to Gloom Garden) but finding other options for all ages showed shriveled.

We are in a rebuilding phase right now but I’m feeling positive about it. We’ve got some strong bands coming up with a lot of variety and a lot of passion for DIY. Keep an eye on Voices in Vain, Versus, Lossbearer, Jeopardy, Void Bringer, Jessica Amelia, Black Axe, Potentially Lobsters, Old North End and Gone Wrong. We’ve got promoters who are working very hard to book shows and keep touring bands coming through and I see more and more repeat attendees at shows.

We recently held our record release show in the back yard of Junktiques in Burlington which is an antique/junk/trader shop because they were the only place that would allow the space to be all ages and have all of the money collected go to the touring band. It ended up being an incredible show and we are very grateful Junktiques stepped up but I am still in hopes for a consistent all ages venue in the area. I was incredibly fortunate to have plenty of all ages shows when I needed them and I hope that we can provide that for the kids that need them today.

What does the immediate future look like for The Path as it relates to shows, touring etc.? Now that Chaotic Good is out working on the next release. I’m pretty sure that I can talk about it. We are planning a split LP with our friends in Psychic Weight which will be coming out on State of Mind. That band is sick and makes me want to plow through a fucking wall. If you don’t know them you should fix that and get as psyched as I am to hear their side of the record. We’ve got 6 songs and a Warzone cover lined up that are currently being mastered by our friend Chris Macie.

We have some incredible shows coming up with some great friends. I’m not sure when this is getting posted but on 8/17 we are playing the Voices in Vain return show at Higher Ground in Burlington with Crafter, Lossbearer and False Accusations. We are also playing Patient Zero Fest in Pittsfield MA in September which has an INCREDIBLE lineup this year. Crafter, Sick Minds, Years Apart, Makeshift Graves and a TON more and it’s $10. Anyone that misses that is a sucker. We also are playing with Agnostic Front in October which is completely insane.

Past that, who knows? Make more buddies? Play more shows? Write more records? We will jump on opportunities that get us psyched and we will stop when we aren’t feeling it anymore.

Most underrated Long Island hardcore or punk band? Any era. Small Arms Dealer. That band had multiple wizards and a bear in it and was perfect in every way.

One book that every person should read? I’m 20 pages to the end of Making Spaces Safer by Shawna Potter which has been uplifting and helpful. We have issues in Vermont with predatory behavior being pervasive in our scene and causing substantial damage. It’s become an incredibly difficult situation to navigate. This has made me aware of the lack of framework to successfully handle situations of harassment and predation. Coming from a place where I have been vocal about inclusivity and safety for the vast majority of my life I still learned a LOT. I’ve gained perspective and tools that will hopefully help me improve safety in our scene (or any room I’m in) while dealing with harassers and abusers in better ways. As a world we need to develop framework for inclusive safer spaces so people can live and restorative justice so people can heal. I certainly don’t have all of the answers but I am learning. I’m grateful that this book exists and I hope that everyone that goes into any public place picks it up. There is also a pocket guide if you want a quicker reference version. Also, AK Press put it out so it is 150% Punk.