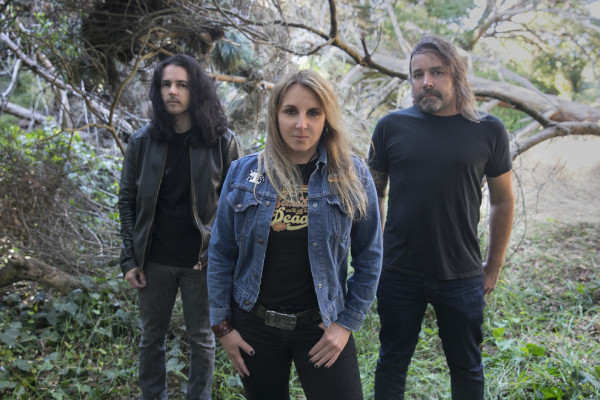 by John Gentile Interviews 34 weeks ago

Acid King play crushing, low, rumbling, ominous stoner metal. For twenty six years now, they've been reveling in the psychedelic, heavy low end. And, not only that, this year is the twentieth anniversary of one of their more iconic freight trains, the massive 46 minute, six track Busse Woods. Inspired by what would go down on the outskirts of Chicago, the album would go on to define midwest metal and serve as the band's first true victory.

With the album hitting two decades this year, the band is touring and playing the album live. And, they've also re-released the beast with some bonus tracks (including a Motorhead cover!) To that end, Punknews' John Gentile spoke to guitarist/vocalist Lori S about the album, the woods, and drugs. Check out the interview below.

Why was Ned Brown Forest Preserve was a special place for you? As a teenager of the 70’s in the suburbs of Illinois cruising around and hanging at the different forest preserves was the thing we did. Busse Woods/Ned Brown was one that people would buy and sell drugs at, lids, dime bags, purple microdot, orange sunshine, black beauties etc…. . Many bong hits and Frisbee games were had and the memory is forever etched in my brain!

"Drive fast, take chances" is of course, about taking chances. What's the worst chance you ever took? This is actually something that our 1st Bass player Peter Lucas used to say to me when I left band practice on my bike. The worst chance was attempting to save money on tour by renting a ford econoline pass van to go on a 3 ½ week tour! The idea was to remove the last 2 bench seats and cover up the windows but when I saw the van and all our gear I knew I had to abandon the ship and spring for a sprinter.

What was the best? The best chance was when Guy our 4th bass player left the band with out much notice and we had shows booked around SXSW. I called Rafa to see if he would be into doing to shows. He was in Florida visiting his family so he learned all the songs by listening to them on the headphones and he flew to meet us in Austin, we practiced at our friends Dixie Witch’ practice space and played the shows!

Perhaps surprisingly, Busse Woods has a Jesus Christ Superstar cover on it… or a least a "version" of 39 lashes. Are you a fan of musicals? I’m a fan of this soundtrack. There are so many hidden riffs in it. The track doesn’t have any deep meaning to me I just love this riff it’s such a heavy groove and it’s a blast to play!

Some artists look back at their earlier work and feel a sense of pride and accomplishment, while some look back and can only see perceived "flaws" despite acclaim from fans. What do you feel when looking back on Busse Woods ? I feel surprised of the popularity of this release. Once digital sales were tracked I noticed how many plays several of the songs this this release were getting and out it had the most plays out of all our other releases and that surprise turned into gratification! I had no expectations as I never do so to see this release so relevant and popular today is definitely a feel good moment!

.You're known for your fantastic guitar tone and, shall I say, blues "feeling"… You're great at conjuring a certain atmosphere. With any instrument, there is often a contrast between "feeling" and "technique." Do you feel one aspect is more important than the other? Why thank you! For Acid King, feeling is very important. Tone and atmosphere are a huge part of the riffs. Technique has never been that important to me. My style of songwriting and playing is a tone experience for me and the audience.

Apropos of nothing, I recently read a quote by Fat Mike of Nofx, where he was citing Darby Crash or one of the Germs. Mike said, essentially, "it's important to not always give the fans what they want." He was referencing the fact that sometimes the Germs were a complete mess live. I'm curious as to your stance on that proposition. Ha ha! Well… hmmmmmm… For me, my goal is to always play the most heartfelt set I can. Sometimes you’re on sometimes you’re not and I try not to trip too much on that. I give the audience what I have to give each night and to be honest the audience is a big part of how the show will be. If it’s a Monday night and no one is drinking and they are thinking about how they have to go to work on Tuesday perhaps the vibe of the audience is not putting out energy that we can grab on to but a Saturday night everyone is loosened up and you can feel that and you play accordingly. I guess I’m getting off topic here!

With heavy, low, rumbling rock, there is often a connection made between the music and drugs - namely acid and weed. Do you feel that there is a connection between these two activities, or maybe, you feel as though the connection is overstated and heavy music stands on its own? I think for some there is a connection- it may help an artist be more creative or a listener get deeper into the music. For me there is not a connection. Our band is named after Ricky Kasso, “The Acid King” he was the drug user, not me! I think back in the 60’s this was more valid when every hippy dropped acid. Bu,t now a days I would sway towards overstated. But, I’m probably not really connected to what other bands are doing!!

Lastly, is there any new material in the works? There are some riffs in the work and after this tour we plan to back to them!