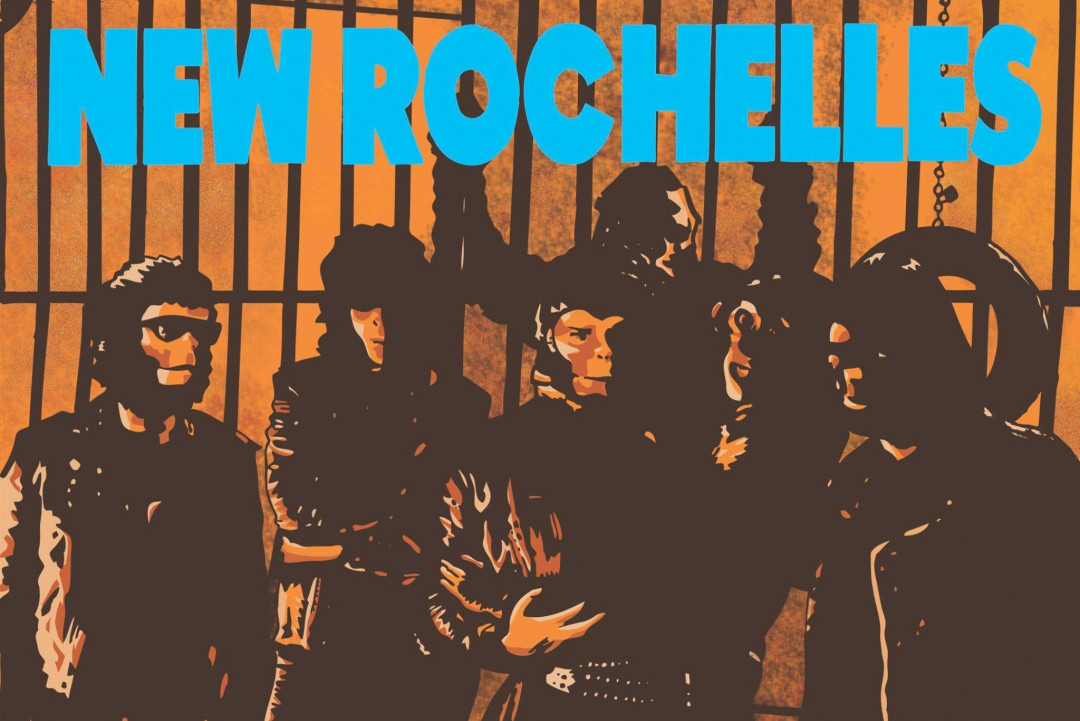 by Samantha Barrett Interviews 2 years ago

We are pleased to bring to you a Punknews exclusive artist on artist interview between bassist Rookie Rochelle of Long Beach, NY’s The New Rochelle and drummer Richie Ramone. See below to check out the conversation.

On November 8th my bandmates in The New Rochelles and I (Rookie Rochelle) released a full cover album of Ramones 9th studio album Animal Boy on Hey Pizza! Records. This had been a passion project that we had been working on for a long time and the excitement of it finally being released has been overwhelming. It is no surprise that I wear my influences on the sleeve of my LJ, so being part of a project like this felt right and I hope the die-hard Ramones fans worldwide will enjoy our version for years to come. I am excited to bring you an interview I conducted with Richie Ramone. Drummer of The Ramones from ’83 - ’87, author, actor, relentless touring musician and all-around great guy. Sit back, put on your favorite Ramones t-shirt, blast our version of Animal Boy, crack open a Budweiser and check out the interview.

Hey Richie, before we begin; when fans bring up the album Animal Boy what is the first thing you think of?
The cover and why am I holding the chimp.

The album starts off with “Somebody Put Something In My Drink”; a song you wrote for the album. What was your mindset when writing songs for The Ramones and this song in particular?
I told Dee Dee the story behind "Drink" and he said I should write that song. It was really cool that it was the first track, but I wish we did a video for it also. I think that was too much for John to swallow, and even though Dee Dee pushed for that song to be the video, John said no. He never liked it when I got too much attention.

You mention in your book I Know Better Now that there was a little bit of hesitation from Johnny when you included a minor chord in “Humankind” on the previous album Too Tough To Die; did you ever feel limited in what you could write or how you played the drums for the band?
I think limited is the wrong word because you need to write and play songs that worked with their overall sound. You can't just throw fills in because you thought it was cool, but I really didn't think a minor chord was so out of reach. There are four pieces to the puzzle and they must all fit together or you have nothing. As far as drumming went, I had to keep it simple and steady or else John would get lost.

The first time we played together you told me the hilarious story of the photoshoot for the album cover. Can you share that again?
In a nutshell, I was not supposed to hold the chimp, but every time they gave it to Joey, he jumped back into my arms. Dee Dee wanted nothing to do with it at all, and when they gave it to John, it pissed on him. I'm an animal lover and the chimp must have recognized that, so it all went smoothly when he was in my arms.

The song “My Brain Is Hanging Upside Down (Bonzo Goes To Bitburg)” caused a bit of a stir between Joey and Johnny. How animated were the debates regarding the name of the song and its overall message?
Dee Dee and Joey thought what Reagan did was pathetic and that's how the song came about. John loved Reagan so he started a big stink with Sire records to change the name. Bonzo was a way better title, but at least the song was not cut completely. See, the Ramones compromised on certain things!

You also wrote the song “(You) Can’t Say Anything Nice” for the album session that wasn’t used on Animal Boy but was released on a single in Europe at the time. Do you think Johnny realized it was about him and kept it off the record?
No, not at all. It was purely about the money with John. He never wanted me to have more than one song on each record because I didn't have to share the writing royalty with him on the songs I wrote. Martin at Beggars Banquet, our label in Britain, loved my material and always took another from me like he did with "Smash You". Martin never bowed down to John.

Dee Dee wrote a bulk of the songs on this record. What can you tell us about Dee Dee’s prolific songwriting? Did you ever get to watch him sit down and write a song or did he mostly bring near complete songs to the band?
Dee Dee wrote like 2 songs a day mainly while taking a shower most of the time. His head was filled with lyrics and he had notebooks of them lying around. None of us in the band ever wrote together until I started doing rap stuff with Dee Dee. We wrote a lot of beats together. Fuck, I miss that guy!

In 2013 you released Entitled which included a mix of new songs and re-recorded versions of songs you wrote for The Ramones. Why did you choose to not include “Somebody Put Something In My Drink”?
I did record "Drink" but it was only on the vinyl version. I didn't put it on the CD because I wanted to add something special for the vinyl release, which came out later.

We’ve been having a blast playing the songs off of Animal Boy promoting our version of the record. When your band tours now are you playing anything off of Animal Boy? Is there a song that you haven’t played with your band from the album that you’d like to do a version of?
We always play "Animal Boy" and "Somebody Put Something In My Drink". I stay away from the songs that are too sweet or don't work with my vocal style. Joey was an amazing singer and a great crooner. I tend to cover more of the edgy material like "Havana Affair" as it tends to be a little more friendly to our set. It's really hard to cover anything by the band because I lived it for nearly 5 years, and know what it is supposed to sound like. That haunts me all the time!

What are you up to next? Your last album Cellophane came out in 2016, followed by singles in 2017 and 2018; and your book I Know Better Now: My Life, Before, During, And After The Ramones was released at the end of last year. Can we expect more tour dates and another album soon?
We have a 6 week run in Europe starting in March of next year, and my movie debut, Headcheese the Movie premieres the end of April in 2020. I am also writing for a new release due out next year, so things are moving along. I still have a lot of living to do so I am not going anywhere.

Thanks so much for taking the time to discuss this with me and the rest of The Ramones fans world wide.
Thank you for the interview and I hope to see everyone when we roll into a city near you. Ramones Forever!