Check out this unreleased track by Lance Hahn's An Uneasy Peace! 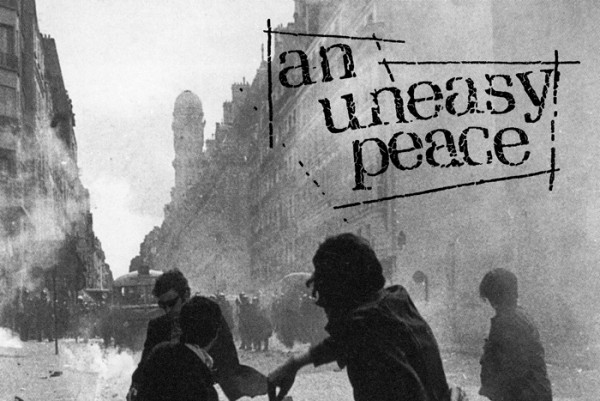 We tragically lost Lance Hahn of J Chruch in 2007. However, a year before he passed away, he recorded with Stan Wright (Arctic Flowers/Signal Lost), Mike Warm (Defect Defect/The Observers), and David Wuttke (Drunken Boat) as An Uneasy Peace. We're honored to debut a single from the band's unreleased EP

"Speaking in Tongues" is straight-up charging punk rock! Drawing inspirations from the Anarch-punk heroes, the band rips through two minutes of full on, clenched teeth, crazed eye fury. Flux, Crass, and Omega Tribe are all guides here, but some American barking ala MDC creeps through the whirlwind. This rips!

Here's what Stan had to say about the record:"Unfuckable Chainsaw. "What do you think?" asked Lance. This was his idea for the band's name. I offered 'An Uneasy Peace' as an option.

Lance approached me one day about doing a hardcore band. I said yes right away. Not only was he an awesome and prolific songwriter, but i was really curious about the hardcore songs he had written. Lance was always very supportive of the music i was doing and would tell me so much about bands i had never heard of. He was a walking music encyclopedia.

We especially bonded over Anarcho punk. He could talk for hours about anything music. When he passed away he was working on an extensive collection of interviews with anarcho punk bands to be collected as a book titled 'Let the Tribe Increase'. I hope it finally comes out one day!

The recording process for our project was really fun. The lineup was Lance Hahn on guitar, Dave Wuttke on bass, Mike Warm on drums, Stan Wright on guitar and engineering. Im pretty sure Matt Badenhop played a guitar solo on a song too!

We set up everything in the studio. Lance would play us a song and we added whatever we wanted. After doing this a few times,we would record it. We tracked and mixed everything in one day.

Were so excited this is finally coming out for everyone to hear! This record is dedicated to Lance Hahn 1967-2007 RIP Maybe Unfuckable Chainsaw wasn't so bad…"

The EP is out March 20 via Dirt Cult and you can pre-order it right here!. Meanwhile, check out "Speaking in Tongues" below, right now!