Rat Scabies on the new Sinclairs LP, modern punk, and the Damned 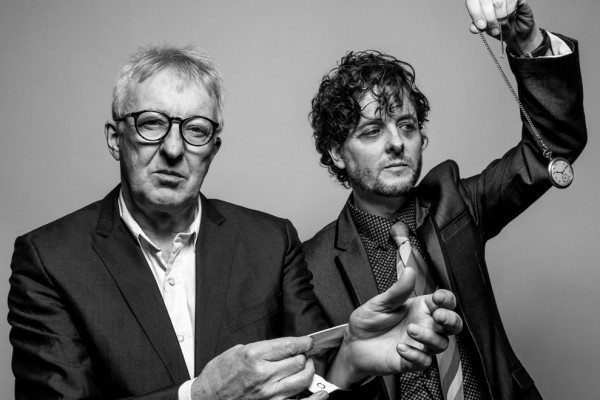 Who was the first punk rock band? Was it Link Wray & His Ray Men with the release of “Rumble” in 1958? Or was it the Stooges and their song “I Wanna Be Your Dog” in 1969? While it is definitely arguable, many agree that the punk scene that we know and love - or hate -commenced when The Damned released their song “New Rose” as a 7-inch single in 1976, helping ignite the first wave of punk rock including bands you might recognize such as The Clash, the Sex Pistols and across the pond, the Ramones who also released their first album that same year. And aesthetically, long before Alkaline Trio and much longer before My Chemical Romance, The Damned were donning DIY fashion and vampiric style while singing stories about Dr. Jekyll and Mr. Hyde and being grimly fiendish.

Since that time, The Damned have gone through numerous lineup changes including the significant departure of original drummer and founder Rat Scabies who left the legendary band in 1996. Over the following years, Scabies has remained busy, bringing his percussive talents to several bands and his producing talents to a number of albums. His latest project is The Sinclairs, in which he partnered with Flipron’s guitarist and lyricist Billy Shinbone to release their superb instrumental debut album, Sparkle, on May 8th.

Over a choppy Skype connection, Scabies spoke to Punknews writer Gen Handley about his new album, what the punk scene was like in the British 60s, as well as the origins of his unique name. Check it out below.

What are you up to today? To be quite honest, fuck all and I’m quite happy about that. (Laughs)

Strange times, eh? Yeah it is – very. It’s terrible with all of the sickness and death and sadness. But, on the other side of the coin, I really like the silence of not having sirens and airplanes constantly flying by. The birds are singing and it’s pretty cool. If the pubs were open, it would almost be the perfect existence.

That’s a pretty positive attitude. Yeah, you have to be these days. Life is pretty good.

Congratulations on the release of your first Sinclairs record. My first question is why an instrumental album? I’ve always known Billy as one of the most prolific lyricists – I don’t know if you’re familiar with this band or not. The words he spouts out are quite incredible. He told me one day, “I really want to make an instrumental album…just once, just to get away from words.” He’s a Damned fan and he had some ideas about doing some things with the guitar, so we went in the studio for a few days and put it down. It was a bit strange – it was just two blokes who can play a bit. (Laughs) So we left it for a few months and then he turned up at my house with a set of keyboard bass pedals and this 30-quid synthesizer – a little, pathetic thing. I messed around with the synth and it was really cool and all a bit random. Because of this out-of-tuneness and this lack of musical ability that I’ve got, it made everything sound a bit weird and a bit odd. But when we heard it, we both kind of went, “Ah, that’s better.” (Laughs) It was more of an emotional response than a musical one.

How did you meet? Have you played together before? No, he was broke and I had a recording studio. (Laughs) One day, this bedraggled couple of blokes came over and said they had a 100 pounds and wanted to know how much studio time they could have. And then two years later, they were still in there. (Laughs) During that time we had become pretty good mates and I really liked his songwriting and tunes…his way with words. It’s always great to work with people you get on with and like – it’s important.

You can definitely hear that chemistry on the record. Yeah, he’s got a very good empathy when playing with me and not many people can do it. (Laughs) Our music is very natural, unpolished and we just kind of play what we’re feeling.

It kind of sounds like a punk album when you describe it that way. The music doesn’t sound like it but it has a lot of punk philosophy and thinking. A lot of people talk about punk and what it was and what it was meant to be. I think after all this time and the benefit of hindsight, the only thing that you could say it was is that it was a kind of attitude. You can do whatever you like and that’s great – some people will get it and some people won’t. The real important thing is to not have any rules.

When I first listened to the record, I thought it could be a great soundtrack to a movie. Do you agree? I do…very much. It’s because there’s a strong sense of melody in the tunes…they actually have structure and make sense as complete things. We kind of had this yearning to make the entire album coherent from beginning to end. And to put it in a sort of an ipsy-dipsy, hippy way, “it’s a musical journey, man.” (Laughs) We kept it to 10 good songs because sometimes you can get bored on that journey.

So what kind of movie would this be a soundtrack for? I always thought it would be great for a Scandanavian noir thriller. You can almost imagine the bleak, grey skies and depressed-looking detectives. But then there are other tracks that really take me into the 50s as well. So yeah – I don’t know.

Is it true that the song “The Sewers of Carcasonne” is about you searching for the Holy Grail in France? Yeah, it is. I was sort of brought up with the Grail stories by my parents who were researchers and into that whole thing. And a few years ago, I did a book with my neighbour about the whole Grail thing and the Templars. I got into some really interesting places like Nights Templar initiation ceremonies…some secret society stuff. We’d creep around cemeteries late at night and so the whole thing was kind of fun. But the titles of the songs appeared after the music did – it was quite strange. When you listen to that song, you can really imagine this medieval sewer as you go down there, looking for something that has been lost.

Changing gears, what was it like being in The Damned when the group first formed in the 70s? It was quite terrifying, a lot of the time…if I’m honest. The big world, the one that was full of grownups and policemen, didn’t really like us. Here’s the thing. You were the enemy within and we were being held up as troublemakers and a problem to society. I thought, “Yeah. We are. But it’s really good fun.” (Laughs) It was all about rebelling against what had come before. At the time, everything that was fashionable was quite expensive and it was about John Travolta and disco and clothes. And the music wasn’t great but you had to be technically brilliant to do it. So were very anti all of that and were a very logical progression from that, which is what revolution is supposed to do. It was an existence…it was life.

So why did you end up leaving the band? Especially after all of its success? Because it stopped being like that. It started to become something that people, who were in charge, didn’t really understand that we needed more time. That we needed to be something else…we needed to stop for a while. So we were pushed into over-working it and making the second album. It hadn’t even been a year since the first one had come out and they were already saying how they needed the next record. And then you realize how instrumental you are in big business deals and power plays – things men in business suits do – and that had become more apparent.

It all happened quite quickly. I have an old poster for a show at The Roundhouse in London – one of the very first times we played there. The headlining band was the Flamin’ Groovies, then it was the Troggs and The Damned were the opening act. But then I have another poster, for a show at The Roundhouse again, but it was The Damned headlining with Motorhead opening. That happened in three months and it was kind of like being fired out of a catapult. It was such a whirlwind and I didn’t really know what was going on, while it was happening. Now, I realize how lucky I was and how I didn’t know how to enjoy it properly.

Any regrets? Yeah, a few, I think. We should have been much stronger as a band. After the first album, we should have looked at what was happening to us and should have talked about how were all genuinely feeling about it. Instead, we were just quiet and not really voicing our doubts and we just sat back. That’s probably my biggest regret. We should have pulled the plug and told them that we were going away for six months and then come back and make another record. So I didn’t really see that situation changing and didn’t see any future so I decided to go somewhere else.

What are your thoughts on the current punk scene? Is it relatable at all? (Laughs) I haven’t been anywhere near anything that’s called a punk scene in a long time – I don’t who you would even call punk these days. There are a couple of bands I really like, but I don’t know. It’s weird, isn’t it? It became this very polished, saleable thing again. I’ve got nothing against Green Day…I think they’re really good at what they do, but it’s not really the same. But again, they’re really good at it and they’ve sold a lot of records. When that happens, it means that its commercial value is the sound and identity that it has, which is about distorted guitars, a certain vocal sound and a bit of bad attitude. I think that after Green Day emerged, it seemed like there were hundreds of bands that sounded the same – same guitar and same drum sound. But it was without any real anger or passion. You’ve got to believe in this shit or otherwise you can’t make it real.

My last question is where did your name come from? None of your fucking business. (Laughs)