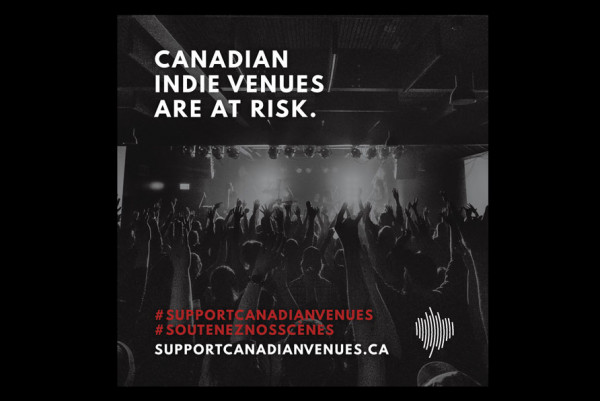 Toronto noise-punks Metz and the grungy Dilly Dally are among the artists throwing their support behind #SupportCanadianVenues, a campaign seeking relief for the grassroots end of the Canadian live music ecosystem. The campaign, spearheaded by the Canadian Independent Venue Coalition, is seeking government relief for the small businesses that operate the bars, clubs, and spaces where bands get their start. While vital to the overall health of the country's arts scene, these venues have been largely shut out of the emergency COVID-19 funding provided to the cultural sector (notably the Emergency Support Fund for Cultural, Heritage and Sport Organizations). The campaign is encouraging supporters to sign a petition to the Minister of Canadian Heritage and reach out to various decision-makers. This effort comes in the wake of some grim estimates regarding the durability of the independent venue sector across North America, with a recent American survey speculating 90% of venues could close permanently due to the pandemic.

In a statement carried by Exclaim, Chris Slorach of METZ added commented:

"I spent most of my life growing up in these smaller venues playing shows, learning how to be a better band. And I think that they're super important for the culture landscape, of at least my own city Toronto, and many other places. I think they deserve support, we need to help our independent venues because they'll continue to help us."

Katie Monks of Dilly Dally appeared in a PSA from the campaign:

Music: Women In Music series: Fay from The Rezillos