Fire was always the plan for Toronto's OBGMs 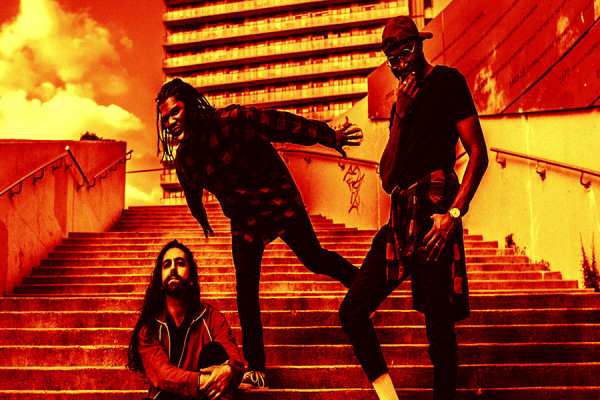 by Adam White Interviews 2 years ago

High energy Toronto punk trio The OBGMs recently shared the second single from their upcoming record. "Not Again" follows the June-released "Cash" in previewing the group's forthcoming LP for Black Box. Longtime Punknews' contributor Adam White spoke with the band in the most recent edition of his Canadian punk newsletter Some Party, discussing the raucous new single and the group's fire-spitting promotional approach. We've shared that chat with you below.

Adam White: Fascinated by the band's aggressive online promotion of the album, I reached out to guitarist/vocalist Densil McFarlane to dig into The OBGMs' sound and mindset. It seems clear that one could trace the lineage of "Not Again" back to The Bronx and The Hives in the heyday of the early 2000s rock revival. It's not much of a stretch to draw lines from there back to 90s garage-punk legends like the New Bomb Turks. Denz casts a wide net when considering the group's forebearers on this record:

Densil McFarlane: We don't draw inspiration from any band in particular; however, the similarities lie in being unapologetically and unabashedly real as loudly as possible. We love sonically and visually loud things, but we also need it to be uniquely us. As music lovers and students of punk/rock/grunge, we have definitely listened to Bad Brains, Nirvana, The Vines, White Stripes — but we also listen to Prince, NERD, George Clinton. If you trace the timeless bands in history, you'll notice they had a sound/image that could not be ignored.

That refusal to be ignored has been readily apparent, with the band's social media presence spitting fire to promote these songs. McFarlane certainly hasn't hesitated from naming and shaming establishment publications from Canada's small pond music press to demand better representation for BIPOC rock artists. Given the current cultural backdrop, and their visibility as a predominantly Black punk band in a genre often considered homogeneous, I asked if the moment demanded that they step up. Was their current level of promotional intensity always in the cards, or is it a reaction?

Fire was always the plan. I've been so angry and insecure because we are continuously unheard/unnoticed. We are fighting for our lives and I just want to scream. The best way I can do that is in the booth. This cultural moment has allowed us to amplify this message and apply it to representation in music. It has also allowed us time to reflect and look for ways we can uplift other BIPOC bands using our platform. This isn't a moment for us. This isn't a black square for us. We are here. We want seats at the table, or we will burn it down. And we still may.

What strikes me about both "Not Again" and "Cash" is the unconstrained rock'n'roll swagger The OBGMs project. While a few contemporary artists play with that imagery (Toronto's Danko Jones have worn it like a badge for years), that level of boisterous confidence feels rare. It may be our collective emo hangover, but it still feels like most modern rock bands would rather retreat into irony and self-deprecation than be seen waving their banner. So where's that energy coming from?

The energy is that I just don't care anymore. I'm free.

Kanye West. Kanye West came into the hip-hop game knowing that, in his heart, he was the best. Whether people agreed or not was irrelevant. He actively got the message out, delivered quality products and more people bought in. Music is a deeply personal thing and all artists face some form of anxiety or insecurity releasing their art to the world. I just don't want to build my house on my insecurities. I want to build my house on what I truly know — whether people agree or not. YOU HAVEN'T HEARD A BAND THAT CAN DO WHAT WE DO ON A RECORD. Put some respect on it. We are literally bending and breaking genres. The louder I explain this, the more we deliver, the more people will be paying attention.

"Not Again" and "Cash" mark the group's first new material in three years. Having parted ways with their keyboardist, the OBGMs now play as a trio comprised of McFarlane, bassist Joseph Brosnan, and drummer Colanthony Humphrey.

The OBGMs, short for The oOoh Baby Gimme Mores, recorded this new material with the Grammy and JUNO Award-winning producer Dave Schiffman (PUP, The Bronx, Anti-Flag). The band's upcoming LP, which follows their 2017 self-titled debut, arrives in October from Black Box.

Videos: Mascots: "Figure It Out"