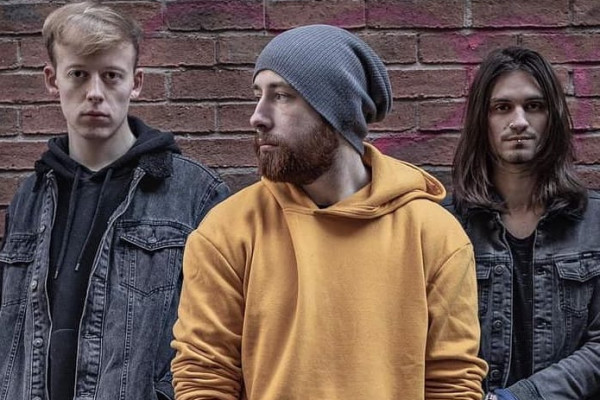 by John Gentile Interviews 16 weeks ago

Up and coming Dublin-based hard rock/metal band Jet Fuel Chemistry are about to release their debut EP. Doing so in lockdown (albeit partial) is a bold move, but the band are keen for people to hear what they’ve been working on. Punknews staffer Sam Houlden spoke to bassist Lorcan Macken and vocalist Dan Cusack about the release.

Hey guys - thanks for your time. So, not long until the EP comes out, right? Lorcan: We’re excited. It’s due out August 7th.

So, give me an idea of your background - have you guys known each other a long time? Lorcan: The band has been together under this name for about 2 years and this lineup is about 6 months old. Kicked off with the merging of 2 friendships - guitarist/producer Danny & I met at school at 16 and absolutely hated each other. I played classical guitar & Danny was into BFMV and just told me straight off that the way I played guitar was all wrong. There was no way of convincing Danny otherwise! Unless you’re playing at least a 60-gauge top string you were doing it wrong. Then we did work experience in a music shop together and became friends. Then at uni, I really wanted to to start a band. I knew a few chords, got really into the Foo Fighters and in the end we decided to start a Foo Fighters tribute band and Dan ended up being the singer of that band. Over time me and Dan ended up writing together while Danny quietly became an incredible producer in the background.

You mentioned that Danny was into BFMV, I’m guessing also Avenged, Killswitch and those other melodic metalcore bands. There’s a well-defined path between those bands and some of the more modern guys like BMTH, While She Sleeps, etc and I can hear those sorts of influences in your music. Is that the kind of music the whole band were into? Lorcan: I came into this kind of music from the other side and I didn’t initially get the thrashier edges of it. I never had the seminal records from Metallica, etc and actually, the first metalcore I heard was probably an old Northlane song. When I first heard a guitar tuned to a Drop F, played in a completely uncountable rhythm it was like nothing I’d ever heard. So where the rest of the band followed that well-travelled path that you mentioned, I think we kind of met in the middle.

You’ve also clearly got a message and something to say, is that fair? Lorcan: When we set out to write, we didn’t set out to give a message, but as we got stronger instrumentally, it developed in itself. It’s a difficult tightrope to walk as it’s also easy for bands to become too preachy. But with the current state of chaos, this feeling of unrelenting fear, isolation, loneliness…no-one can hold anyone with any real power accountable and we’re all tied up in conflict with things that are seemingly so trivial; I think we just aim to capture that spirit. A lot of music in Ireland has been good at capturing the positivity, but we want to capture more of the other side of things, too. Dan: I think no matter who you are, You can relate to those thoughts of "why do I do what I do, why do I take things the way I do" and I think it is important to have a message and to have these observations. Lorcan: So it feels good that instead of cramming our commentary down people’s throats, we can just disguise them as anthems! Dan: If it’s catchy, people don’t forget it!

It’s a good way of doing it! So when you guys write, how does that process work: Dan: We do a lot of demo writing. Lorcan will normally write something first, then maybe it’ll get changed, then I’ll write stuff around it. I think we have a good mix of input and the songs come about quite organically.

I couldn’t help noticing across the EP that it also has an oddly danceable quality to it? Despite the message it conveys, it does kind of swing a bit? Lorcan: I think credit where it’s due, that comes mostly from our drummer Ross. He’s an absolute machine and comes from a background that is less traditional metal but more stoner or grunge bands, so if we’re talking about polyrhythms or djent, he’ll look at you with a blank face. The one word on his mind is groove. And that’s why the songs really make you feel like you want to move to them.

Cool. Makes a lot of sense, actually. I was reading in some of the press notes that the whole EP was recorded, mixed, mastered, etc all in Danny’s bedroom? Lorcan: It was indeed done entirely in one black, mould-infested bedroom. I’m sure Danny will be happy you’ve said that! It’s impressive though, as it has a very contemporary feel. Not entirely unlike BMTH, WSS, Polaris, etc - that sound does seem to be pretty palatable to people now. Is that your ambition, do you want to be one of those big names in that scene? Dan: Absolutely - we want it all man! I want to share a bill with those big acts. Lorcan: All of our music circles back around to how this band came about and how fans in this generation are rejecting genre entirely. It’s based more on vibe and feel and I’d be so ready to play with people from Frank Carter to Travis Scott. There has been a snobbery that comes with labelling metal into such specific genres. Dan: I also just want to say that I’m super happy with some of the bands we’ve already played with. Hundredth are one of my favourite bands! In the end, we don’t all have the same tastes in music, but we still kind of come back to the same bands when we’re together. It makes sense, as genre boundaries have blurred because of the way people consume music and there may be more scope for bands to bleed over into the mainstream as a result. Lorcan: I hope so - bring it on.

I think that the EP will speak for itself, but are there any redeeming messages you guys really want to come out of it? Dan: I think because of the songs being co-written with Lorcan and myself, we usually end up in the same kind of place musically, but also there are nuances and differences that I hope come out in the songs, but ultimately it comes back to that theme of observing the world around us, speaking out about what is wrong - the subject matter of "War" being dividing lines, for example. I think that the record leans towards that message of the social injustice that’s going on around us.

Accepting that nothing is certain at the moment, have you got any plans for shows when things start opening up again? Lorcan: Yeah, our EP Launch show has been rescheduled for the Grand Social in Dublin March 13th 2021. I think there’s a lot of uncertainty around gigging in 2021, but all we can promise is if it is safe, then we’ll 100% play shows. Dan: 100% Sounds good. I think there will be plenty of people who want to see these songs live. Lorcan: I hope so! That’s always positive to hear! Dan: Thanks so much man!

Catbite release live album (for one day only)