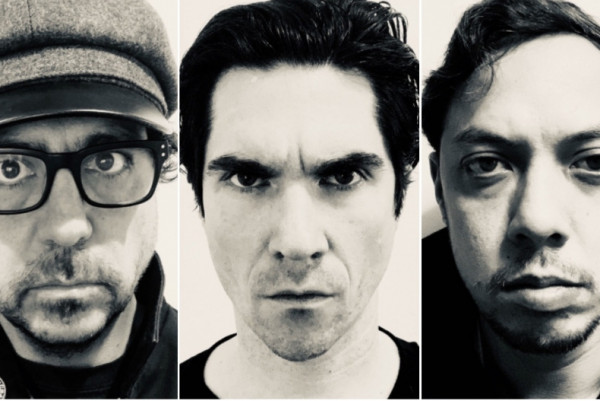 Barfbag is the band headed by David Bason, a figure that seems to lurk on the edges of music discussion, but somehow seems to elude the spotlight. Who is this Shadowy figure? Punknews' Gen Handley was finally able to catch up with Bason to talk about Barfbag…and Morrissey? Check out the interview below.

Barfbag – the protest music we never knew we needed

If you’re a music geek like I am, you’ve probably heard of the name David Bason in whatever online sites and circles you frequent. Look up the origin stories of bands like The Strokes and The Dresden Dolls and his name will come up, a pivotal character in the stories of these iconic bands. But at his core, the long-time music manager and record executive is a passionate, extremely active artist who not only talks the talk in his day job, but actually walks the proverbial walk, singing in several (mostly) punk bands on the side. One of those groups is Barfbag, a socio-politically-focused trio made up of Bason on vocals along with notable musicians Brian Viglione on drums (The Dresden Dolls, Violent Femmes and Nine Inch Nails) and Kenny Carkeet on guitar and production (AWOLNATION). Incendiary and thought-provoking, Barfbag recently released their debut EP, The Plastic Age, in mid-July, a small but mighty collection of songs refreshingly reminiscent of old-school hardcore like Black Flag and 7 Seconds.

“It’s super angry,” Bason says. “When it was written and recorded last year, it was kind of a reaction to a lag in protest music happening on a regular basis – I didn’t feel. Hip-hop has great protest records but I wasn’t feeling it in punk rock. Kids don’t go to punk rock shows for protest music anymore unless they’re specifically into that subculture. With the mainstream, it just felt like there’s an entire generation of kids who found power in dropping out rather than becoming active.”

He hopes the EP and their upcoming full-length, Let’s Stop a War on November 3rd (appropriately on election day), will be catalyzing for some listeners, energizing them to take some positive action that could benefit their community and country.

Amidst the political and civil strife occurring across the US, he says there is a silver lining to be found in the “lag in protest music” he mentioned earlier – a creative and topical shift taking place within the smoldering coals of the music community.

“It’s interesting that since the record was recorded, protest music or protest songs have found their way into the mainstream,” he says. “More and more pop artists are doing it…people have reached their breaking point and now it’s finding its way into the mainstream, which I think is fantastic. People are politically active right now. In the last year, I feel like the average person has experienced an awakening.”

Hopefully he’s right and musicians are waking up. Between the ever-present political tension, civil rights atrocities, pandemic paranoia as well as a bit of boredom, Bason speculates that some quality protest music could be on our horizon.

“Maybe there’s a group of younger people right now who are going to come up being active rather than what I’ve been seeing over the last five years, which is, ‘I’m going to deal with this by tuning out, take a fuck-ton of Xanax and do some chill track with some mumbling on it,’” he says. “That doesn’t seem rad anymore. What seems rad is having an opinion and being out there calling you on your shit. That to me exciting.”

So how does he think Morrissey would feel about the EP’s second song “Morrissey Wears Leather Shoes?”

“I don’t care. Fuck that guy,” he says. “That guy is such a putz. He skated by on a fast haircut for too long and people are onto him now.”

Kid You Not to release second LP